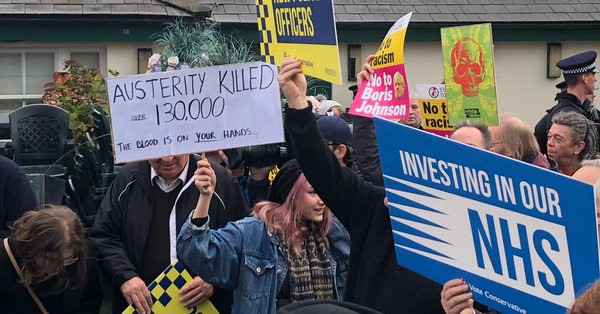 STUC welcomes positive engagement with its Manifesto for Social Justice from Labour, SNP and Scottish Greens, but receives no response from Conservatives or Liberal Democrats

–          STUC Manifesto for Social Justice called on all prospective MPs to endorse the principles of fair work, the right to food and housing, and investment in public services

–          STUC analysis of response to the Manifesto from the main parties concludes that only Labour, the SNP and the Scottish Greens are committed to ending austerity and tackling poverty and inequality

–          STUC General Secretary Grahame Smith urges trade unionists “to vote for social justice, an end to poverty and exploitation and for Fair Work and to do all they can to prevent a Tory government”

THE Scottish Trade Union Congress (STUC) has called upon Scotland’s 540,000 trade union members to ensure that no Tory MPs are elected in Scotland in the General Election tomorrow [12 December], after assessing the response from the various parties to its Manifesto for Social Justice.

The STUC manifesto called upon prospective MPS to back the principles of fair work, the right to food and housing, and investment in public services. While the STUC has welcomed positive engagement with the manifesto from Labour, the SNP and the Scottish Greens, it has received no response from the Conservatives or Liberal Democrats.

In light of this, the STUC has argued that only Labour, the SNP and the Scottish Greens are committed to the principles of social justice laid out in the manifesto, to ending austerity, and to seriously tackling poverty and inequality.

Commenting on the parties’ responses, STUC General Secretary Grahame Smith said: “Labour’s manifesto commitments to end zero-hour contracts, abolish Universal Credit, and bring the rail, mail and other essential assets into public ownership offers a radical approach to addressing the challenges of automation, the climate emergency and globalisation in a way that is fair and just. Its proposals to investing in public services alongside support for industry to create secure, high quality jobs and future skills, is in stark contrast to the Brexit obsessed, financier friendly, Johnston Tories who have no empathy or interest in the day to day concerns of working people.

READ MORE: Analysis: No matter the outcome of #GE19, there’s no return to ‘stability’

“While the Tories have made vague and unconvincing promises on investment, their record over many decades is of enforcing cuts on the most vulnerable and presiding over increased poverty and inequality. If they win, we can expect more of the same.

“The SNP has provided an in-depth and generally positive response to our manifesto for social justice and many Green Party candidates have also indicated their support. The lack of a response from the Liberal Democrats will do nothing to restore the trust and respect they lost due to their role in the Cameron coalition and their support for austerity and attacks on the poor.”

Smith offered specific endorsement to none of the three parties which engaged with the STUC Manifesto, but instead called upon Scottish trade unionists to prevent a Tory government.

Smith added: “This is the most decisive election in generations. The choice is stark. This Friday we could wake up to the most right-wing Tory Government in living memory with Boris Johnson claiming a mandate to privatise the NHS and sign away our sovereignty to Donald Trump. Alternatively, we could finally have a government with the authority to tackle decades of injustice.

“I know Scottish voters are very canny when considering who to vote for. I urge all trade unionists to vote on Thursday and to vote for social justice, an end to poverty and exploitation and for Fair Work and to do all they can to prevent a Tory government by ensuring no Tory MPs are elected from Scotland.”