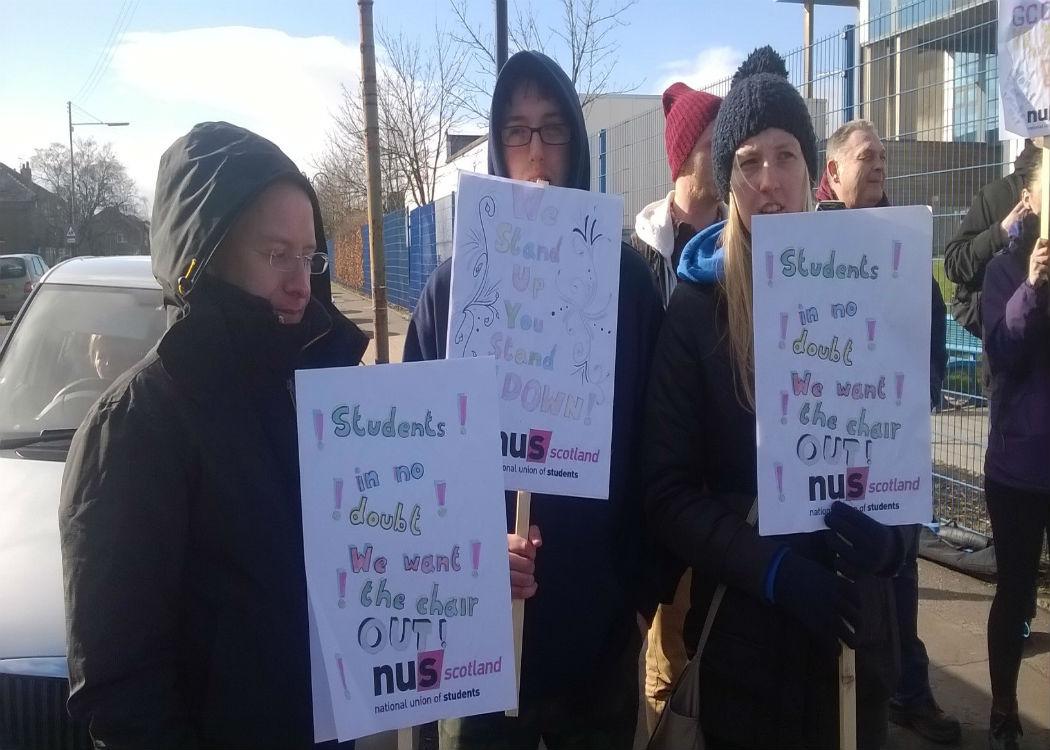 THE TWO student representatives on the board set-up to run Glasgow’s three colleges have resigned, increasing the total number of resignations to four in the space of a couple of days.

The Glasgow Colleges’ Regional Board (GCRB) was established as part of the Scottish Government’s new regionalisation strategy to run the three new ‘super-colleges’ in Glasgow.

However, it has been hit by repeated crisis, failing to establish itself as a properly functioning body and has faced criticism for not acting to address a dispute at Glasgow Clyde College between students and the chair, George Chalmers.

The Herald revealed on Tuesday that Pamela Gillies, principal of Glasgow Caledonian University, and Maureen McKenna, director of education for Glasgow City Council, stepped down from the board citing increasing concern over its failure to work constructively with the national funding body, the Scottish Funding Council (SFC).

Glasgow Clyde College Students Association (GCCSA) President Barclay McCrindle and Glasgow Kelvin College student President Andrew Aitken have now followed suit, and in a stinging resignation letter seen by CommonSpace, McCrindle wrote: “The last couple of months have shown issues of bad governance at local colleges that are simply unacceptable. We would have expected to see strong and decisive action at a regional level in relation to those, but there has only been silence.”

“The last couple of months have shown issues of bad governance at local colleges that are simply unacceptable.” Barclay McCrindle, GCCSA student president

McCrindle and other student representatives from GCCSA were asked to leave a board meeting at Glasgow Clyde College which decided to suspend principal Susan Walsh from the college, despite the fact that new Scottish Government legislation made student representation mandatory on college boards. The students have still not been informed of the reason for the principal’s suspension, and GCCSA have passed a vote of no confidence in chair George Chalmers and held a protest outside the recent board meeting of the college.

The students, including NUS Scotland President Gordon Maloney, called on chair of the GCRB, former first minister Henry McLeish, to intervene in the increasingly troubled situation at the college to defend student rights, but he has so far failed to speak out.

Further division has since been revealed, as a letter from EIS trade union representatives claiming to be on behalf of all teachers at the college accused Walsh of leading “a perceived bullying culture”, but some EIS members challenged this, saying they had never seen the letter before it was published and do not agree with its sentiments.

“It is my view that the students of Glasgow are being badly let down,” McCrindle wrote. “As a student president, and someone who cares deeply about the role our colleges play in our communities, I simply cannot, in good conscious, remain as a member of a board that, in my view, is allowing that to happen.”

Aitken’s resignation letter was the same as McCrindle’s, and the issues of concern went beyond college governance at Glasgow Clyde College to the GCRB’s role as a funding body and its relationship to the SFC.

The SFC has launched an independent review into why the GCRB has failed to establish itself as a funding body on 1 April as expected, and instead will only be ready by August, a full year after the body launched. McLeish drafted a letter of complaint directed at the SFC’s Laurence Howells, but that letter sparked Gillies and McKenna’s resignations, and McCrindle was also critical of its intentions.

“That the SFC has been forced to move back the date at which Glasgow can become responsible for its own budget and running speaks volumes, but to then see the board encouraged to sign a letter of complaint to the SFC for attempting to rectify those problems shows how deep rooted issues of poor governance are, and an unwillingness on the part of the regional board to accept those or act to improve them,” McCrindle wrote.

“That the SFC has been forced to move back the date at which Glasgow can become responsible for its own budget and running speaks volumes,” McCrindle, GCCSA student president

CommonSpace revealed last week that the GCRB has racked up extensive bills since August last year, paying over PS100k for office costs to Glasgow Caledonian University from January-March this year, as well as McLeish taking over PS14k between August-December last year, more than double the amount the Scottish Government expected a board chair to take for a full 12 month period.

The GCRB have also projected “top-slicing” PS400k from the Glasgow college board to pay for its costs over 2015/16, some 14 times greater than the costs for the equivalent board in Lanarkshire.

The GCRB has admitted this has put Glasgow’s colleges “in a worse position” to other colleges in Scotland, and have sought discussions with the SFC to come to a new funding arrangement whereby the SFC pay directly for some of the SFC’s costs.

Maloney told The Herald that the student resignations were a “hugely worrying” development.

“The time for passing the buck has stopped and the Glasgow regional board, but particularly the Chair, needs to step up and recognise the mess they’ve created and how they can improve it for students,” Maloney added.

McLeish rejected criticism over his role, and told The Herald: “It was the unanimous decision of the board [not to get involved] and it’s important to note that on both occasions the key student representatives were in attendance and supported the action taken by the regional board.”