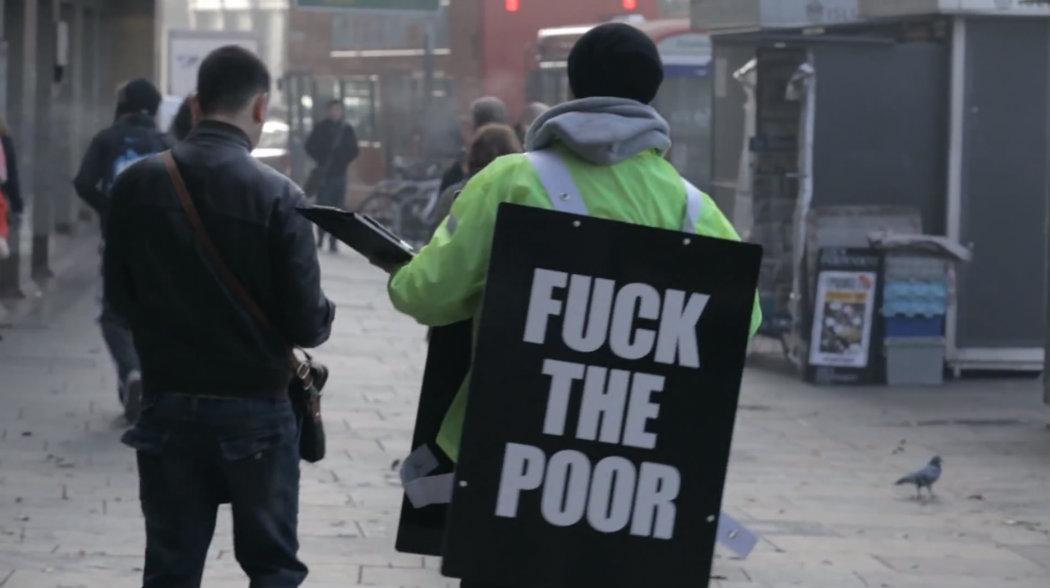 The stunt was an imitation of a popular Youtube video by the Pilion Trust that documented public anger at the offensive statement ‘fuck the poor’ followed by public disinterest when the slogan was changed to ‘help the poor’. The video of street responses in London has been watched 4.6 million times.

According to the Daily Record, Police Scotland issued fines under anti-social behaviour legislation.

Opinion online was split between those who supported the tactics to draw attention to high levels of inequality and those who thought the act was counter-productive or irresponsible.

Patricia Robertson asked for campaigners to think of the children: “There are other ways of getting attention for their cause. Have some respect for people who find the use of that word in public offensive and for children please.”

Kerry Douglas said there was an irony in the complaints: “By complaining about it, you’re giving them what they want. None of you are commenting on their ‘Donate to Unicef’ sign, are you? The point of the ‘experiment’ is that they’re trying to show how more people will retaliate when these opinions are shown, but less will interact with the sign holder when they are seeking help for the poor/homeless/charities.”

Guy Hamilton also criticised what he saw as St Andrews faux outrage: “There’s far, far worse things out there than the word ‘Fuck’ that go on silently every day. By being outraged by the public space having ‘fuck’ in it, but not the cruelty and indifference that happens every day, you are *specifically* the target of this stunt.”

Enrico Marelli was neither impressed or offended: “I don’t really believe this kind of initiative has a real power to do anything, but sure I find funny the fact that people have a problem with the words, rather than with the real problems of this world.”

Free speech and offence have been hot topics of debate following the shooting at the offices of Charlie Hebdo, a French satirical magazine. In Scotland the ‘Offensive Behaviour at Football Act’ also criminalises ‘offensive’ singing.