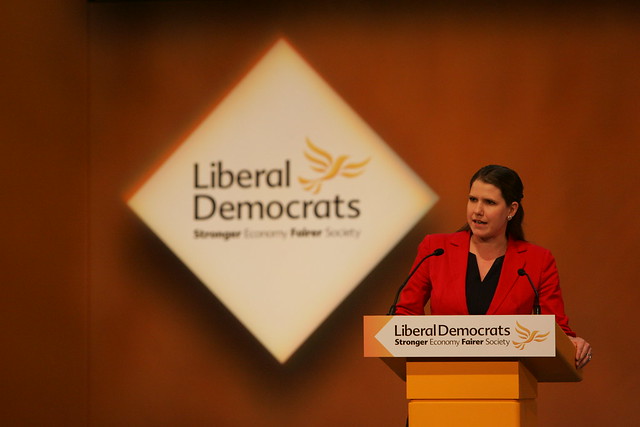 THE leader of the Liberal Democrats, Jo Swinson, is under pressure to re-think her instant rejection of Labour leader Jeremy Corbyn’s plan to oust Boris Johnson and become caretaker prime minister.

Corbyn wrote to the leaders of the Lib Dems, SNP, Plaid Cymru and Greens outlining his proposal on Wednesday [14 August] evening to defeat Johnson in a no confidence vote, before establishing a temporary caretaker government, which would then extend article 50 and call a General Election, on the basis of which Labour would campaign for a mandate to hold a second EU referendum.

I’ve written to the leaders of other political parties and senior backbenchers from across Parliament to lay out my plan to stop a disastrous No Deal Brexit and let the people decide the future of our country. pic.twitter.com/Jz1MjXCrqk

Swinson, who has said previously she would not work with any government led by Corbyn, dismissed the proposal out of hand, stating: “I would expect there are people in his own party and indeed the necessary Conservative backbenchers who would be willing to support him. It is a nonsense.”

That position has come under growing scrutiny over the course of the day, with Green MP Caroline Lucas sending a “personal plea” to the Lib Dem leader to reverse her position and back Corbyn’s proposal.

Lucas said: “Jo, please change your mind, Jeremy Corbyn has done the right thing. He’s reached out to bring together a broad coalition of MPs to stop Johnson’s disastrous No Deal Brexit and to give the people of the country a say in what happens next. I will support him in that move. And I’m calling on colleagues right across the house and in particular the Liberal Democrats to do the same.”

Lucas, who caused a stir on Monday when she floated the idea of an all-woman government of national unity to stop Brexit, added that she would be seeking a People’s Vote before a General Election, but that she thought that could be negotiated with Corbyn, and that it was a mistake to “reject his offer out of hand”.

SNP leader Nicola Sturgeon, responding to Lucas’ message on Twitter, backed her up, stating: “To be clear – the SNP remains willing to work across party lines and explore all options to stop a no deal Brexit. Jeremy Corbyn’s suggestion is not the only possible option – but given the circumstances, nothing should be ruled out at this stage. Jo Swinson should rethink.”

Earlier in the day, Corbyn doubled down on the position expressed by shadow Chancellor John McDonnell last week on a second independence referendum – that he was opposed to it, but as prime minister he would not block a request to hold one from the Scottish Parliament, a position which is at odds with Scottish Labour.

The move has widely been interpreted as laying the groundworks for a Labour-SNP pact at the House of Commons, and Sturgeon gave her backing for the Labour leader’s stance.

“I’m not Jeremy Corbyn’s biggest fan but on this he’s right,” she tweeted. “It is legitimate to oppose independence and to argue against a referendum – it’s not legitimate for Westminster to block a democratic mandate and a majority vote in the Scottish Parliament for indyref2.”

Swinson has refused to say whether she thought the UK Government should allow another independence referendum in Scotland if another pro-independence majority was elected at the 2021 Scottish Parliament elections, stating “that’s a hypothetical which I believe isn’t going to happen”.

The recently elected Lib Dem leader said to Channel 4’s Krishnan Guru-Murphy earlier in the day that she would back Conservative backbencher Ken Clarke or Labour backbencher Harriet Harman to lead an emergency government, both of whom have told her they would be willing to do so.

The MP for East Dunbartonshire responded to a day of criticism on Thursday evening with a more conciliatory tone, stating that she had offered to meet Corbyn to “discuss how we can work together on a deliverable plan to stop no-deal, including the option of uniting behind an MP who can command a majority in the House.”

Swinson added: “All the evidence is that Jeremy Corbyn does not have the support of enough Conservative MPs to command that majority.”

Labour MP David Lammy, an ardent supporter of a People’s Vote who has been critical of Corbyn in the past, also criticised the Lib Dem leader, saying it was “crunch time for the Lib Dems”.

Swinson also appears to be under pressure internally, with reports that Lib Dem MP Layla Moran is “much more on board” with working with a Corbyn-led government to stop No Deal.