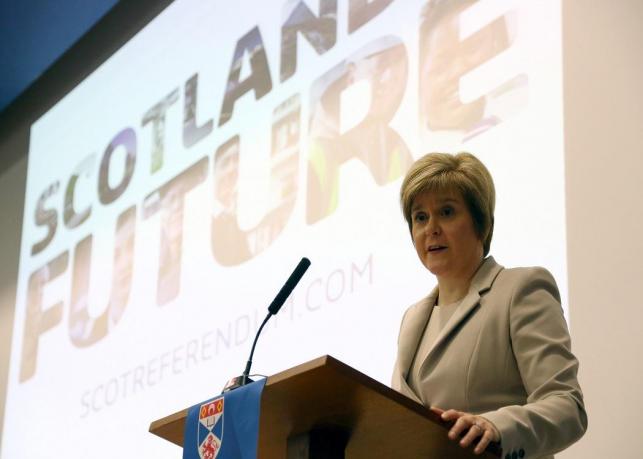 A ‘BREXIT’ VOTE would make Scotland vulnerable to an even more rightwing Tory government than Cameron’s, Nicola Sturgeon will say today.

Warning that the far-right of the Conservative party would make a “power grab” in the event of a vote to leave the EU in the upcoming referendum, the First Minister will urge voters to choose to remain in the European Union on 23 June.

In a speech later today, the First Minister is expected so say: “The time has come to brand the ‘Brexit’ campaign for what it is – a bid for a right-wing Tory takeover of the reins of power in the UK.

“The people leading the case for a vote to leave the EU are on the right of the Conservative Party and will take an ‘out’ vote as their signal to make their power grab complete.

“Make no mistake – a ‘Leave’ win would be a victory for politicians who actually believe George Osborne and David Cameron are moderates, and it would leave Scotland at their mercy.

“Outside the EU but within the UK, with most economic power still concentrated at Westminster, Scotland would be left vulnerable to the most right-wing Tory government in modern history.

“And if we leave Europe, they will take it as a green light to scrap workers’ rights and employment protection, slash public spending as part of their ideologically driven austerity obsession – and would target Scotland for extra cuts.

“There should be no doubt in people’s minds – if Leave wins then Scottish workers and family budgets will be in the firing line.”

The intervention will come as the Leave side strengthens its lead in opinion polls, with TNS and YouGov polls both putting Leave ahead by seven points yesterday [14 June].

Tom Harris, a former Labour MP who now heads up the Scottish ‘Vote Leave’ campaign, said the intervention was a “desperate bid to scare Scottish voters”.

“Just six months ago her Europe spokesman attempted to set a positive tone for the campaign by declaring that his party believed the UK could be successful outside the EU.

“That was a breath of fresh air – today is more like the smell of panic in Bute House.

“What Nicola forgets is that if we leave the EU it is her own government that would gain control in Scotland, not David Cameron – control over fishing, agriculture and important social and environmental legislation as well as other areas would be devolved to the Scottish Parliament.

“Leaving the EU puts the power of Scotland’s future into Scotland’s hands.”

Polls have so far shown a majority of Scots intending to vote ‘Remain’ on 23 June.

Campaigning in Glasgow at the weekend, Leave campaigner and Tory MP Michael Gove said it was still possible that Scots would vote to leave the EU, and said Scotland could have new powers over immigration in the event of a Brexit vote. Willie Rennie, leader of the Scottish Liberal Democrats, said Gove’s comments were “delusional”.