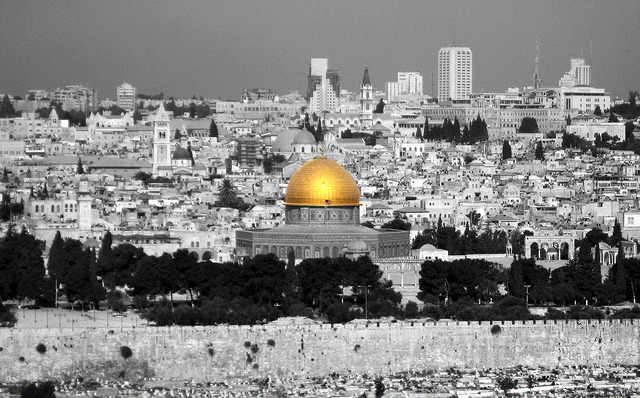 Donald Trump’s decision to relocate the US embassy in Israel has been criticised by the First Minister, Ivan McKee and SNP Friends of Palestine

FIRST MINISTER NICOLA STURGEON has condemned the decision of US President Donald Trump to relocate the US embassy in Israel from Tel Aviv to Jerusalem, joining others within her party and across the world.

In a Twitter post on Wednesday, Sturgeon wrote: “The decision by President Trump on Jerusalem – which includes occupied Palestinian territory – is reckless, wrong and a threat to peace. It is being rightly condemned across the international community.”

“The decision by President Trump on Jerusalem – which includes occupied Palestinian territory – is reckless, wrong and a threat to peace.” First Minister Nicola Sturgeon

Sturgeon reiterated her feelings on this issue during First Minister’s Questions when Labour MSP Anas Sarwar asked if she would join in condemning Trump’s latest inflammatory move. After pointing out that she had already done so, Sturgeon reiterated that she felt the decision was “reckless and wrong”, again citing the concerns of occupied Palestinians.

Elsewhere within the SNP, Nadia El-Nakla, convenor of the SNP Friends of Palestine group, stated: “This a provocative and dangerous act from the US president which is designed to fan the flame of division rather than create peace.”

“We call on the Scottish and UK Governments to exert whatever pressure and influence they have on the US to reconsider.” SNP Friends of Palestine convenor Nadia El-BNakla

“If President Trump proceeds with moving the embassy, he will further destabilise the region causing insecurity in both Palestine and Israel, in turn removing America’s role in any future peace talks.”

“World leaders must act quickly by condemning this reckless relocation and view this move by President Trump as a timely reminder of the huge importance of renewing efforts towards a sustainable long-term solution to the conflict in the Middle East.

“We call on the Scottish and UK Governments to exert whatever pressure and influence they have on the US to reconsider this dangerous move.”

Ivan McKee, SNP MSP for Glasgow said: “This ill-advised decision runs the risk of destabilising an already fragile peace process. I’d like to add my voice to the many who are calling on President Trump to reconsider.”

At present, no country currently has an embassy in Jerusalem, and the international community traditionally has not recognised Israel’s claim to the city.

The decision by the Trump administration, though welcomed by the Israeli Government, has been met with worldwide condemnation, even from traditional US allies, such as the UK, France and Saudi Arabia.

In response to the announcement of Trump’s decision, Palestinian President Mahmoud Abbas has issued a call for support from the UN Security Council and the Arab League, both of which will be holding emergency sessions within the coming days.

Hamas leader Ismail Haniya meanwhile called the US decision a “war declaration against Palestinians”, and called for the beginning of a new intifada.