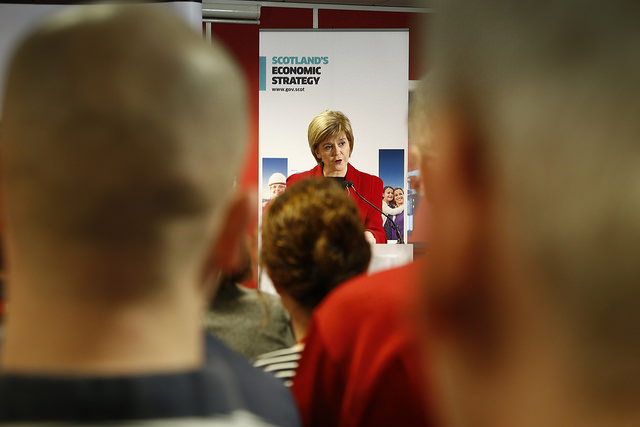 FIRST MINISTER Nicola Sturgeon has said that access to the European Union single market is part of a wider vision for the equitable sharing of growth.

In a speech to a gathering of the Institute of Directors (IoD) at the Royal Albert Hall, she linked the UK government's programme of austerity with Brexit and its additional negative effects on the Scottish economy.

She also stated that being part of a network of "cooperating independent nations" gave Scotland the chance to develop a culture of business which worked in the "public benefit."

"EU membership has been part, not just of our economic strategy, but of our wider vision of Scottish society." Nicola Sturgeon

Speaking about the royal charted of the IoD, the first minister said: "It was granted in 1906, but remains relevant today. It pledges – 'to promote, for the public benefit, high levels of skill, knowledge, competence and integrity on the part of directors.'

"The reference to the public benefit is crucial – it acknowledges that businesses are part of wider society; your fortunes are tied to the wellbeing of your communities, customers and employees.

"We are fortunate in Scotland that so many of our leading companies – as well as being innovative, dynamic, ambitious and successful – already recognise this."

Stressing the connection between a fairer society and government relationships with business, Sturgeon used the example of the living wage and its application in Scotland as opposed to the new living wage which is disputed in England and Wales.

"There are now almost 600 accredited living wage employers in Scotland. That’s up from 70 just two years ago. Next week, we publish a strategy for a fairer Scotland which includes pledges from a number of major employers. We are working with business to create a society where the benefits of economic growth are shared more equally, so that future economic growth is stronger and more sustainable," she continued.

"And so one consequence of the referendum must be a new effort – which needs to be given real substance in the UK Government’s autumn statement – to ensure that the benefits of growth, of globalisation, are more fairly distributed."

"Next week, we publish a strategy for a fairer Scotland which includes pledges from a number of major employers." Nicola Sturgeon

Sturgeon emphasised the line of the Scottish Government with regards to Brexit suggesting that the only “UK approach” as laid out by UK prime minister, Theresa May, was one in which access to the single market was guaranteed and cooperation between UK business to that effect was enhanced.

The first minister said: "I began this speech by setting out how much the Scottish Government values its partnership with the IoD and with business more generally. For nine years now, we have worked with you to encourage sustainable growth and to boost prosperity in all parts of Scotland. And throughout that time, EU membership has been part, not just of our economic strategy, but of our wider vision of Scottish society.

"So I look forward to making common cause with many businesses and voices across the UK. We will seek to work with others of like mind because in doing so, we will be working in the interests of individuals, businesses and communities – not just in Scotland, but across all the nations of these islands."