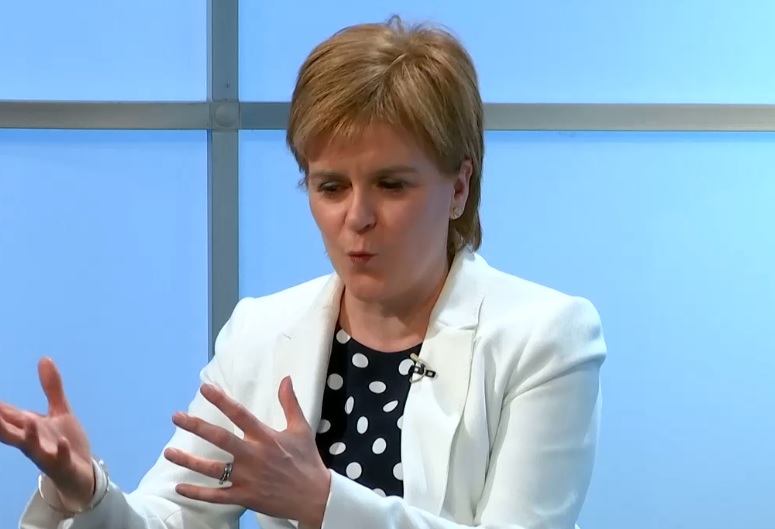 THE SNP’s Growth Commission will publish its findings in the next few weeks, according to First Minister Nicola Sturgeon, who said she had not yet seen the final report.

Sturgeon made the comments about the commission, which was established over 18 months ago to develop a new economic case for independence but has been repeatedly delayed, at a forum hosted by news agency Reuters in London.

The SNP leader said the commission was “due to publish over the next few weeks and I’m sure it will be hotly debated when it does”.

The publication of the commission, which is chaired by Andrew Wilson, former MSP and founder of secretive corporate lobbyist Charlotte Street Partners, is therefore set to come shortly before the SNP conference on 8-9 June.

The first minister’s comments to Reuters appeared to rule out an immediate move to an independent currency after the initial transition period to setting up a new Scottish state after a Yes vote. It has been reported that the commission is looking at a ‘gradualist’ transition to a new currency, potentially based on meeting a set of economic tests before doing so.

Sturgeon said: “My party does not propose or support using the Euro. The options the commission has been looking at are Sterling in a currency union, sterling outwith a formal currency union, or a process that would lead to a distinctive Scottish currency over time.

The commission issued its final report at the end of 2017, and Sturgeon had previously told an SNP National Council in December that it would “be published early next year”.

But it has been hit by repeated delays since and has rumoured to have been subject to further edits, as the party prepare the report for publication.

The National quoted an SNP insider in February stating that the commission report “is being proofed and will have to go to the publishers. We are looking at a possible date towards mid to end of March, sometime when there are no clashes with parties conferences”.

The Sunday Post published a story on 15 April while Sturgeon was visiting China, saying she had seen previous versions but had not yet read the final report, but would on her return.

“There have been reports of it sitting gathering dust in the FM’s drawer for months but she hasn’t seen the final version yet but will when she gets back from China,” the insider was quoted as saying.

Robin McAlpine: ‘Your bloody GDP, not ours’ – why the Growth Commission might not change minds

As well as a new currency, the commission report is expected to have sections on a plan for “inclusive growth” and proposals around fiscal policy.

During the Reuters interview Sturgeon was also asked about her views on Catalonia, after the suppression of its independence referendum last October by the Spanish Government and subsequent crackdown on pro-independence leaders.

She said that Catalonia is not Scotland and visa-versa, but: “Whichever side of the debate in 2014 you were on, we had a consented democratic process…I know there’s a different constitutional set-up in Spain, but I wish there was a consented democratic way there, where people in Catalonia could decide one way or another what its future should be.”

Referring to Spain’s jailing of Catalan pro-independence politicians, Sturgeon added: “Whether they support self-determination or independence, I think all democrats would feel a degree of discomfort about what they’ve seen in the past few months.”

The full interview can be watched here.