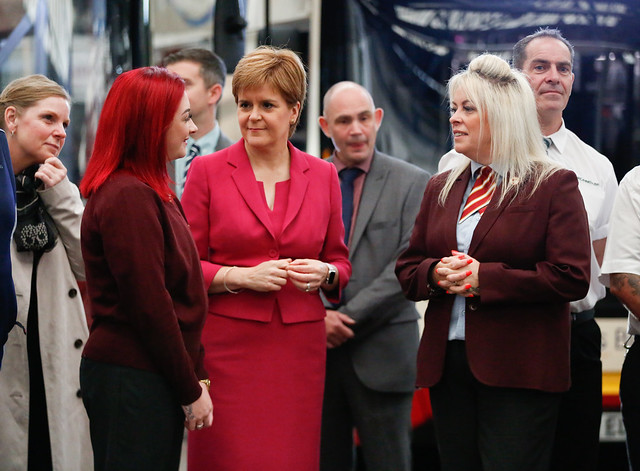 Outlining the 2019-20 Programme for Government, the first minister confirmed that the SNP will put Scotland’s opposition to Brexit and right to choose independence “at the very heart” of any General Election campaign

First MINISTER Nicola Sturgeon’s Programme for Government focused on the climate emergency, announcing a series of policy announcements which she said would “lay the foundations for a new Scottish Green Deal”, while addressing her party’s plans for an imminent UK General Election as the Brexit crisis deepens.

In her speech unveiling the 2019-20 Programme for Government, the first minister described tackling the climate emergency as the “centrepiece” of the latest Programme, saying: “The year ahead will consolidate Scotland’s position as a leader in the battle against climate change.”

Amongst the measures announced were new government support for the propagation of low-emission vehicles, a “transformational” capital investment programme for bus services and a coordinated effort to reduce congestion in Scotland’s towns and cities.

While acknowledging calls from climate campaigners for Scotland to completely withdraw support for the oil and gas sector, Sturgeon argued that doing so at this point would actually increase emissions, due to the requirements involved in importing oil to replace that currently being extracted from the North Sea.

However, Sturgeon stated that any further support for the sector would be “conditional” on its efforts to help pave the way for a transition away from the oil and gas industry.

Also announced was a new £3 billion Green Investment Portfolio, the details of which were sketchy but appeared to be focused on “attracting” foreign investment in waste, construction and renewables projects.

The Scottish Government will issue a public call for such projects in November, in partnership with public bodies such as Scottish Enterprise and the Scottish National Investment Bank (SNIB).

Sturgeon described the Green Investment Portfolio as part of a ‘Scottish Green Deal’, which also included a consultation on Scotland’s public procurement policy, which is currently based on securing best price but which could have low carbon criteria if reforms go ahead.

Sturgeon commented: “These measures cut across all parts of government but they are by no means the final word – instead they should be seen as a down-payment on our commitment to ensure that Scotland ends its contribution to global climate change by 2045 at the latest.”

Fleshing out the Scottish Green Deal further, Sturgeon also announced plans to decarbonise Scotland’s railways by 2035 and make the Highlands and Islands the world’s first net-zero aviation region by 2040.

Sturgeon also confirmed her support for MPs attempting to prevent the possibility of a no-deal Brexit, and announced that she will seek the transfer of power from Westminster necessary for the Scottish Parliament to hold a second independence referendum “beyond legal challenge.”

Noting the likelihood of a snap-General Election, as threatened by Prime Minister Boris Johnson if efforts to thwart a no-deal Brexit on 31 October are successful, Sturgeon added that the SNP would place Scotland’s opposition to Brexit and right to choose independence “at the very heart” of their campaigning.

Addressing what she described as “the political and constitutional emergency that is engulfing the UK” prior to any discussion of the Programme’s policy details, Sturgeon said: “SNP MPs will do everything possible to stop the UK crashing out of the EU without a deal.

“Today, in the House of Commons, MPs from across the political divide will seek to block the possibility of a no deal Brexit.

“Given the anti-democratic move last week by Boris Johnson to shut down Parliament, it is vital that this effort succeeds.

“Scotland did not vote for any form of Brexit, and having a catastrophic no deal Brexit imposed on us is completely unacceptable.”

“I can confirm today that, during the passage of the Bill, we will seek agreement to the transfer of power that will put the referendum beyond legal challenge.” First Minister Nicola Sturgeon

Reiterating the Scottish Government’s intention to offer the people of Scotland “the choice of a better and more positive future as an independent nation,” Sturgeon noted that the Referendums Bill introduced before Holyrood’s summer recess will shortly resume its parliamentary progress.”

Sturgeon continued: “I can confirm today that, during the passage of the Bill, we will seek agreement to the transfer of power that will put the referendum beyond legal challenge.

“We have a clear democratic mandate to offer the choice of independence within this term of Parliament – and we intend to do so.”

Addressing the possibility of a snap General Election, Sturgeon said: “Let me be crystal clear today – the SNP will put Scotland’s opposition to Brexit and our right to choose independence at the very heart of that contest.”

Sturgeon’s announcement came shortly before the dramatic defection of Tory MP Phillip Lee to the Liberal Democrats, leaving Boris Johnson without a Commons majority and making an imminent snap election all the more likely.

While re-stating the Scottish Government and the SNP’s opposition to a no-deal Brexit, Sturgeon emphasised that plans were being put in place to mitigate its potential effects on Scotland, should it occur.

However, Sturgeon said, “mitigating bad Westminster decisions should not be what this Parliament is about.

“We should be focussing all of our energies on the positive decisions that will secure the best future for our country.”

Other announcements included the date being brought forward for the first Scottish Child Payments to Christmas 2020, an additional £15 million of funding for staff and training to help children with Additional Support Needs (ASN), a further £20 million in funding over several years to help tackle drug abuse in Scotland, and a Women’s Health Plan aimed at addressing inequalities in women’s healthcare.