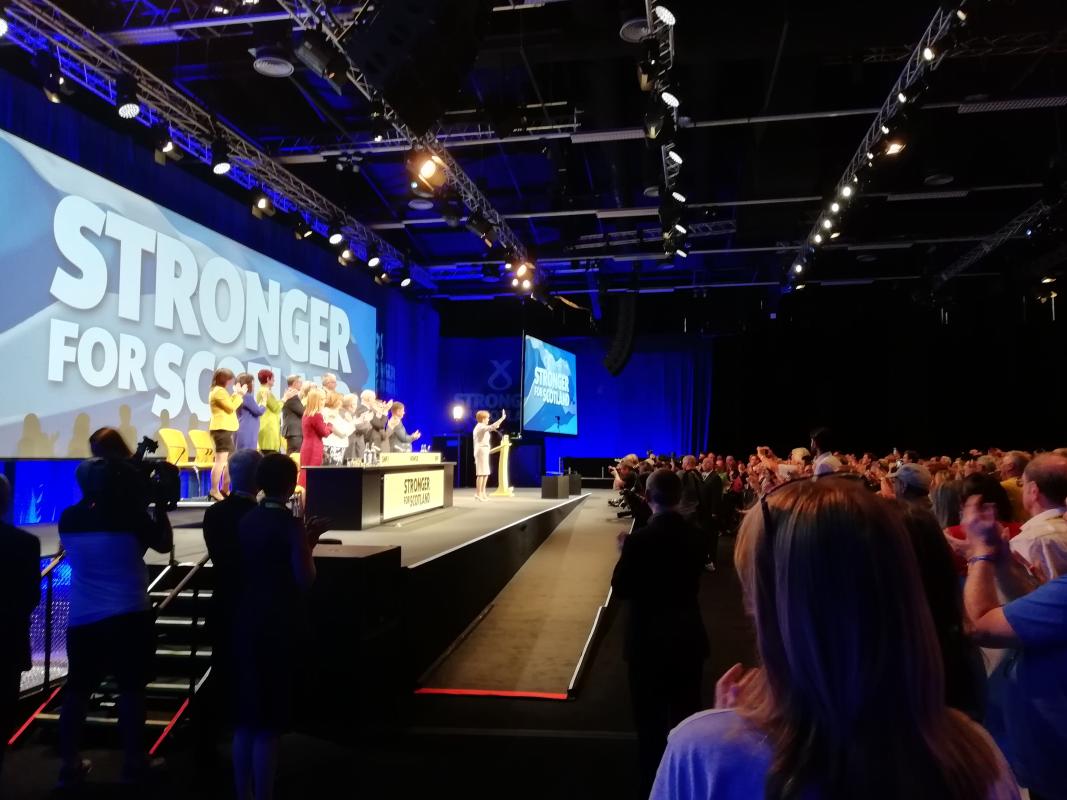 SNP LEADER Nicola Sturgeon has told her party’s spring conference in Aberdeen that “why” not “when” is the “more important task” for the independence cause “right now”.

In a speech which was packed with new Scottish Government policy announcements including on NHS and pay and student finance support, the First Minister told the party faithful “not just to focus on the ‘when’ of independence”.

She said they should use their “energy and passion to persuade those who still ask ‘why?’”

“Right now, that is the more important task,” she added. “And, if we do that, let me tell you this – I am more certain than ever before that persuading a majority of our fellow citizens that Scotland should be an independent country is well within our grasp.”

Sturgeon defended the Sustainable Growth Commission report, which was published two weeks ago [25 May] and has been hotly debated within the independence movement, stating that it provided “a blueprint” for how an independent Scotland can “build a better country, a stronger economy and a fairer society”.

She said the report would be debated at national assemblies over the summer, but that it “provides the platform on which we will renew the case for independence”.

The SNP leader presented an alternative analysis to critics of the report from inside and outside the independence movement, including the Common Weal think-tank and the Institute for Fiscal Studies, which have claimed the proposals in the Commission would lead to austerity.

Sturgeon stated: “On the deficit – created on Westminster’s watch, remember – it shows that the scare stories of Labour and the Tories are completely bogus.

“Even with no extra growth from independence, the deficit can be turned around within five to ten years.

“And it can be done with public spending rising, not falling.”

READ MORE – Economy debate at #SNP18: ‘If we don’t have our own currency we are at the mercy of the banks,’ Kerevan says

The First Minister was determined to quell arguments from the Tories and Labour that she was not getting on with the day job, announcing a raft of new policies the most eye-catching of which was a 3 per cent pay rise for 147,000 NHS workers which will be introduced immediately, raising NHS pay above equivalent staff south of the border, she claimed.

Sturgeon reiterated calls for the devolution of migration powers to end the UK Government’s hostile environment policy towards migrants and refugees, and she focused her ire towards Foreign Secretary Boris Johnson in particular, stating that he wasn’t fit for office.

Of potential Tory leadership candidate Jacob Rees-Mogg, the First Minister said: “Jacob Rees-Mogg – the member of Parliament for the 19th century – is waiting in the wings to drag us back two hundred years…where he will no doubt find the DUP waiting for him.”

Sturgeon went on to say new polling evidence showed the party was in good health, contrasting the SNP’s performance favourably to other European countries where “social democracy appears to be in retreat”.

She highlighted a new social attitudes survey released on Friday [8 June] which showed that there was now more confidence in the economy of an independent Scotland than in the UK, a first in the 18 year history of the survey. An SNP spokesperson told press afterwards that he considers it to be the most significant poll in a long time, an analysis that appears to be shared across the upper echelons of the party.

The party spokesperson also said that the First Minister would provide an update on the timing of an independence referendum in the autumn, but would not confirm or deny whether this update would be an announcement on a second referendum or not. He said the party was working on the basis that in a few months the shape Brexit will take should be significantly clearer, a development that is likely to inform Sturgeon’s thinking on a second referendum.

The spokesperson was keen to emphasise that the SNP leader was focused on governing Scotland, saying the speech was “jam packed with day job stuff”.

“The SNP leader opened her speech by talking about yet more North Sea oil extraction and the second point was about the opening of a new dual carriageway. Considering there wasn’t a single mention of the environment or renewables, this government can no longer claim that tackling climate change is a top priority.

“Better buses and more reliable trains are a real concern for people in Scotland, yet the only mention for transport was the Aberdeen bypass. Furthermore, SNP politicians continue to show more enthusiasm for a new runway at Heathrow than for improving public transport.

“The First Minister was right to say that we should be proud in Scotland to ask people to pay a bit more to protect public services and I hope this is a hint that the government intends to reform the outdated Council Tax.”