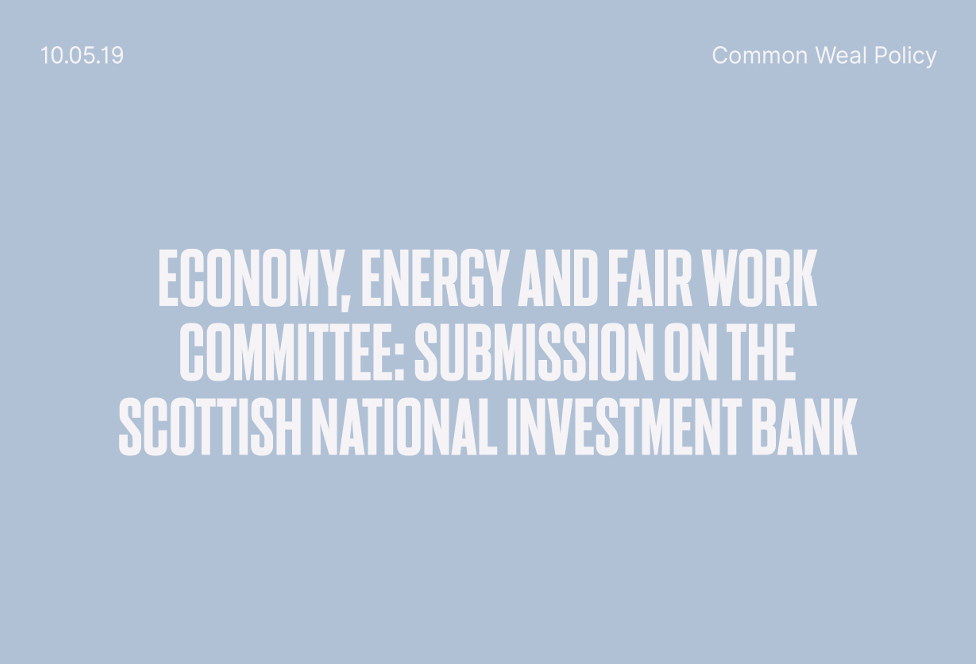 In May 2019, the Scottish Parliament’s Economy, Energy and Fair Work Committee asked for expert submissions on the ongoing work to establish a Scottish National Investment Bank.

Common Weal’s Director, Robin McAlpine gave evidence to the Committee on the 7th of May 2019 which can be watched below. We have also made a written submission which can be read here.

In answering the questions set by the Committee it will help to begin by briefly outlining Common Weal’s vision for a Scottish National Investment Bank. We published the two reports which led to the creation of the Bank (one on the scope and principles, one on the relevant technical considerations) and have integrated our vision for the Bank into many of our policy papers (for example on economic development, renewable energy, housing and public infrastructure). It is from this body of work that our vision derives.

Common Weal sees the Scottish National Investment Bank as a long-term structural intervention into the Scottish economy. Its aim is to drive investment into the Scottish economy in ways which prioritise the public good and in particular in ways that support the long-term development of Scottish enterprises and ‘anchors’ them in the Scottish economy. It should also support the development of world-class public infrastructure, housing and energy infrastructure for Scotland. In time Common Weal believes the Bank should also support and coordinate a Scotland-wide system  of local banking on a mutual or publicly-owned basis. This would both address the problem of declining access to banking services in many parts of Scotland and act as the primary financial support structure for small businesses (most small enterprises do not borrow money but rather rely on long-term relationships with local banking services).

We envisage the Bank as a source of finance which is tailored to public-good outcomes, but the bank must operate on full cost recovery basis as a commercial bank would (but without extracting private profit). It must be mission-driven not only to ensure the public good aspect but also to comply with European Union competition laws. But it should not be the job of the Bank to seek to achieve public-good outcomes alone. Rather it should work with a range of ‘intermediate institutions’ which would stimulate demand and make strategic interventions, providing finance packages tailored to need in discussion with customers and stakeholders. Common Weal has already outlined proposals for a Scottish National Infrastructure Company (an adapted form of the Scottish Futures Trust which would let the Bank lead on funding packages and instead focus on best practice in infrastructure design and project management), a Scottish National Energy Company and Energy Development Agency (based on the Danish model and driving investment into a coordinated energy system on a strategically-planned basis) and a revised enterprise support network orientated around the bank. We will publish further work on other intermediate institutions such as a National Housing Company and a body to oversee a Scottish Green New Deal.

In this model the bank would accept any applications for lending or equity investment. These might come directly from enterprises or projects or by negotiating appropriate lending packages with intermediate institutions which would market those to relevant customers. Any applications the Bank receives would then be assessed against a series of current ‘missions’ which would help to give a weighting to different applications based on an assessment of how well they align with the missions (and, in the initial stages at least, the available capital). For example, if two very similar applications were submitted, the Bank would prioritise the one which had a better profile on, for example, gender equality or efficient energy use – but it does not mean that both projects couldn’t be funded so long as both were judged not to be acting against the Bank’s missions. It is for the Bank to provide finance to applications which meet its criteria; it is for the intermediate institutions to stimulate demand and take a strategic approach to specific aspects of the economy.

A fully-operating Bank would be able to raise capital from sources other than government (for example by attracting pension fund investment) and would be able to leverage that capital when lending or investing (we believe that a three-to-one capital liquidity ratio is sensible and cautious, enabling the bank to lend £3 for every £1 it holds in capitalisation). To be able to attract this kind of investment the Bank should aim to develop a balanced ‘loan book’. Lending to medium-sized enterprises can be comparatively high-risk. This can easily be off-set if the Bank ensures significant exposure to low-risk lending. There is very substantial scope for this in Scotland because of under-investment in public rental housing and energy infrastructure and also because of the need to replace current funding models for public infrastructure. If the Bank has a portfolio exposure which is 70 per cent housing, energy and public infrastructure (all of which is very low-risk) it will position it well to be able to take a greater risk in the 30 per cent of its lending which is to businesses, social enterprises and so on. This will make the Bank a very attractive investment opportunity for investors looking for reliable long-term returns (such as pension funds). There is every reason to believe that the Bank could be capable of meeting as much demand as emerges through this form of capitalisation and leverage – we believe total investments made could quickly reach the scale of tens of billions of pounds, contingent on demand.

To ensure that a long-term approach is taken in the running of the Bank we have proposed that there should be a balanced governance structure. The Bank must be a corporate entity which has an independent Board which is wholly responsible for the Bank’s operation. It will be wholly owned by government and government may set broad strategic goals but government will not be able to instruct the Bank directly on its business practices. Governments can at times take a short-term approach as a result of electoral cycles and if left to financial administrators alone it would be easy for the public-good mission of the bank to get lost over time. To address both of these issues we proposed that the professionals who run the bank should receive advice from a second source to act as a balance to the role of government. We therefore proposed an advisory body which would be a tripartite stakeholder body representing customers (private and social enterprises), stakeholders (such as local authorities or housing associations) and representatives of public-good concerns (such as trade unions, environmental organisations and equalities groups). The Advisory Group would provide its advice directly to the Board of the Bank.

To reach this vision will take some time. The major barrier is that there will need to be negotiations with both the UK Treasury and Bank of England (and potentially the European Union) to gain dispensations to make all this possible. Effectively the Scottish National Investment Bank needs to be treated in exactly the same way as RBS (which is majority publicly owned but the liabilities of which are not counted against public sector debt and it is exempt from ‘co-investment’ restrictions). Common Weal has confidence in the team which is setting the Bank up. Their view is that we will be in a stronger position to engage in these negotiations if the Bank is first able to demonstrate demand. We agree with this position and so are content with the broad thrust of the legislation and the approach being taken since it enables the first phase and does not restrict a second phase. However, we would like to see an ambitious development programme set for the Bank which would see it seeking to begin the above negotiations within two or three years of operation, enabling the Bank to approach the vision set out above within perhaps five or six years.

Common Weal only exists because people who believe in what we do give us a small, regular donation. You can support our work here.