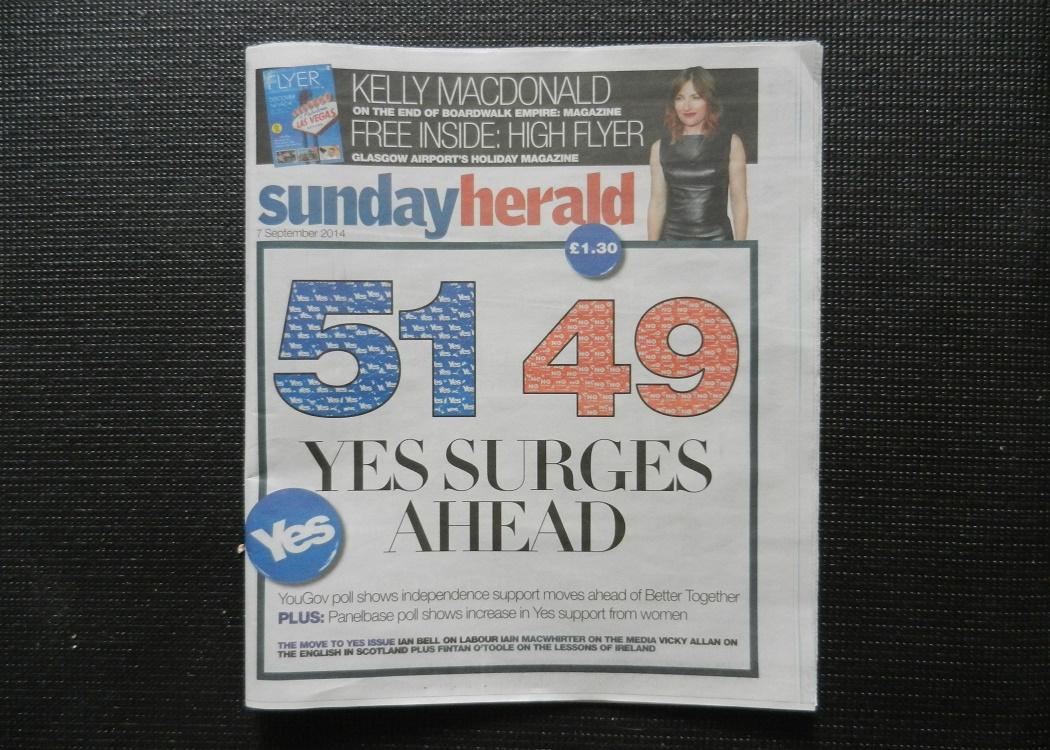 THE SUNDAY HERALD newspaper, the only title in Scotland to back Scottish independence ahead of the referendum vote, recorded a steep circulation increase of 34.7 per cent in the second half of 2014, according to official Audit Bureau of Circulations (ABC) figures.

The rise was a stark contrast to other Sunday/weekly newspapers, which on average fell by 9.1 per cent in circulation, and a significant increase on the Sunday Herald’s performance in the first half of 2014 when ABC figures recorded a sales boost of just one per cent.

The Sunday Herald was the only paper to back Scottish independence, declaring its decision in a May edition of the paper last year. Its sister title, the Herald, officially backed a No vote, along with the Scotsman and the Guardian newspapers.

While the referendum broadly lifted circulation to some extent over the immediate referendum period – the Scotsman reported a sales boost of 13 per cent during referendum week, for example – the Sunday Herald by far outperformed its rivals.

Scotland on Sunday, the Scotsman’s sister Sunday title, saw circulation fall by 16 per cent to 27,500.

For the full second half of 2014, The Herald saw circulation dip by five per cent and The Scotsman’s fell by a larger 11 per cent. However, the Herald’s online audience – which sits behind a metered paywall – increased by a substantial 39 per cent to 96,400, while the Scotsman’s online daily audience increased to 182,500.

The results mean the Sunday Herald is one of the only UK newspapers to significantly turn around the trend of sales decline in recent years.

The success of the Sunday Herald last year prompted publisher Newsquest to launch a daily pro-independence newspaper after the referendum in September, which delivered a vote of 45 per cent in favour of independence.

The National newspaper launched in November and a website followed on this month. Like the Herald, it sits behind a metered paywall.

Tim Blott, regional managing director at the Herald and Times Group, said: “We’re outperforming the market and our rivals because we understand our readers and provide news and content which is relevant, informative, insightful and entertaining.

“This is a huge, unrivalled and sustained success, and I commend our staff while thanking our readers in helping us in achieving it.”

The independence referendum also fuelled the creation of an alternative news and politics media in Scotland which saw the rise of websites such as Wings Over Scotland, Bella Caledonia, Newsnet Scotland, National Collective and CommonSpace.

A number of projects, including Independence Live and the Scottish Evening News, launched crowdfunding drives after the referendum to enable continuing coverage.

Overall in recent years, hundred of thousands of pounds have been raised by members of the public to provide an alternative media to balance what many critics believed was a broadly unionist press throughout the referendum campaign.