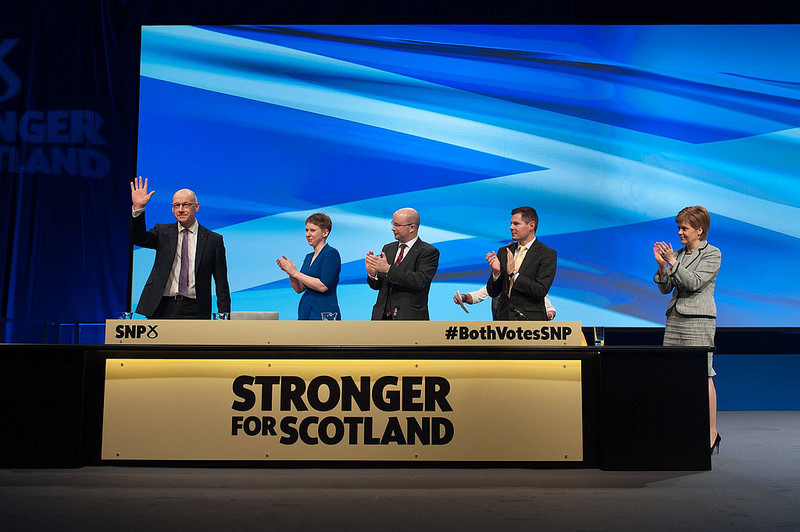 A PROPOSAL to the SNP conference in Aberdeen to explore caps of pay on the highest earners in Scotland has been welcomed by the veteran political activist Richie Venton, an executive member of the Union of Shop, Distributive and Allied Workers trade union (Usdaw).

Wage ratio legislation would effectively create a maximum wage, tying the highest earner in an organisation’s salary to the lowest earner in the business, or alternatively to the minimum wage rate.

Venton, who won support in Usdaw – which represents some of Britain’s lowest paid workers in the supermarket sector – for the principle of a wage ratio to 10 times the pay of a minimum wage worker last week, said the motion to SNP conference on the issue was an important step to introducing the idea.

“In Scotland, we have 11 billionaires with a combined wealth of over £16bn pounds, that’s over half of the Scottish Government’s entire budget.

“The wealth divide is obscene and morally repugnant, but it is also economically disruptive. When you have CEO’s earning in two days what the average worker takes a year to earn, that causes the mass of the population, the working class to have less spending power.

“That means job insecurity for working people, so it’s a vicious circle because of the theft of unpaid labour of the working class, with a million people in Scotland on the poverty line whilst the richest 1000 increase their wealth year on year.”

The SNP will debate the motion, supported by Glasgow Provan branch, at their conference in June at the Aberdeen Exhibition and Conference Centre alongside other motions including on women in the justice system, the recent Israeli massacre in Gaza and democratic party reforms.

The Scottish Government does not currently have powers in relation to minimum wage legislation, but the motion calls for the SNP to campaign for the devolution of the necessary powers.

Richie Venton also highlighted other things he thought the Scottish Government could do immediately: “Simply just supporting wage ratios in principle would be a massive step from a body as authoritative as the Scottish Government. That doesn’t take legislative powers but political will. That helps to change the whole conversation in society.

“Within the powers of devolution, the Scottish Government could take a partial step towards this, because they directly or indirectly employ workers, such as through the NHS or civil servants.

“They could declare that within public sector bodies that a wage ratio would be enforced, just like they could raise the living wage within the public sector.

“That gives workers in the private sector leverage, and would help to force private employers to copy the public sector so that they hold onto staff.”

“An increased share for workers through their wage packet ultimately means more money going back into the economy as their spending power increases,” he said.

Venton argued that this kind of growth is more sustainable, as it addresses the question of how to improve the lives of working class people, as their increased spending power ultimately helps to create more jobs.

A vote to implement a maximum wage law in Switzerland in 2013 failed, with only a 34.7 per cent vote in favour.

The SNP conference, expected to be dominated by discussion about party reform, will discuss and vote on the proposal on Friday 8 June.