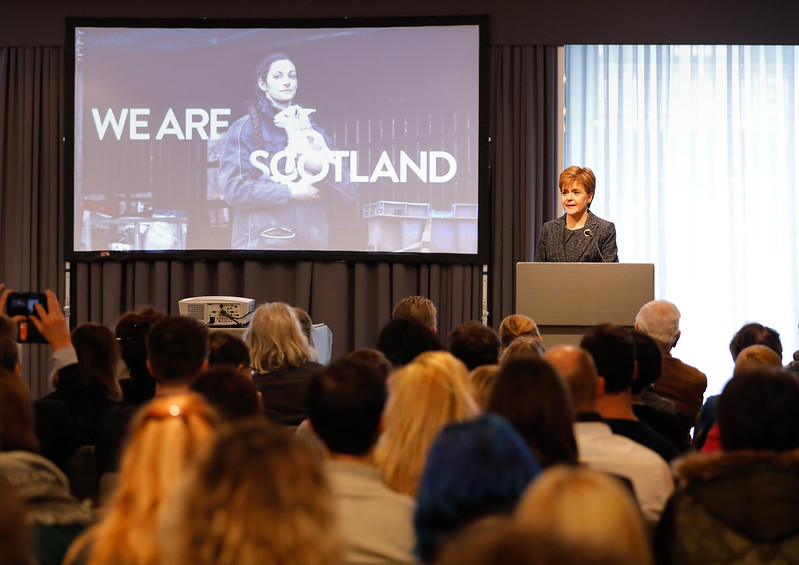 FIRST MINISTER Nicola Sturgeon has emphasised the “invaluable” contribution of EU citizens to Scotland, following the announcement today [20 January] of new funding to help provide them with information and support through the ‘Stay in Scotland’ campaign.

In addition to the £570,000 already awarded to the campaign, Citizens Advice Scotland will now receive an extra £10,000. This will allow the agency to expand legal support services for EU citizens with more complex cases who are applying for the EU Settlement Scheme, which they are required to do in order to remain in the UK after Brexit.

Also, JustRight Scotland, a legal centre focused on justice and human rights, will receive £7,000 to develop guidance for EU citizens, such as explaining their rights to vote and access healthcare, education, housing and benefits.

Speaking at an Edinburgh event held to celebrate the positive impact of EU citizens to Scotland, the first minister said: “We are stepping up efforts to support EU citizens and their families through our Stay in Scotland campaign.

“Since the EU referendum, EU citizens have been forced to live with unacceptable levels of uncertainty as to how Brexit will affect their lives, their careers and their families.

“I want to make it clear today that we welcome EU citizens and celebrate the invaluable role they play in building our communities, economy and culture.

“Scotland needs to maintain inward migration to help grow our population and economy which is why everyone who wants to be part of Scotland’s progress is welcome to live, work and study here.”

Commenting on the new funding, Citizens Advice Scotland chief executive officer Derek Mitchell said: “We have already provided support to over 4,100 people with their applications for the EU Settlement Scheme and in many cases they will have complex issues which need legal support.

“We are delighted to be working collaboratively with other organisations in Scotland to help citizens remain in the UK after we leave the EU by providing free, confidential and impartial legal advice on immigration issues.”

JustRight Scotland director Jen Ang added: “We are delighted the Scottish Government is supporting us to produce clear, accessible information for EU citizens living in Scotland.

“We are aware through our work and partnerships with frontline advocacy organisations that EU citizens continue to experience a great deal of uncertainty about their rights and how they will be impacted by Brexit.

“We are hopeful the multi-lingual and accessible resources we are able to produce with this funding will go some way to ensuring EU citizens feel more confident and supported in understanding their rights and in knowing where to access help and further information when they need to.”

The funding announcement follows SNP condemnation of recent reports that the UK Government that it plans to impose further restrictions of key EU workers coming to Scotland and the UK.

The Sunday Telegraph newspaper reported that Prime Minister Boris Johnson plans to scrap a temporary extension of the current immigration rules to 2023, and instead bringing immigration plans on the first day of Brexit following the end of the transition period this December.

These plans – which, according to the Sunday Telegraph, are being drawn up by the prime minister’s aides, and are expected to be presented to the Cabinet this week by Home Secretary Priti Patel – were characterised as “hostile environment 2.0” by the SNP, who warned they would harm key industries.

“This sort of signalling confirms our worst fears – that the Tories are engaged in a reckless race to the bottom on Brexit and do not care for the harm they will cause businesses and communities, particularly in the rural economy.”

“Holyrood should be given full control over immigration to build a fairer system that works for Scotland and meets our demographic and economic needs.” SNP MP Dave Doogan

“Rather than listening to concerns of small and large businesses and the immigration needs of Scotland and the UK, the Tories are instead ploughing ahead with their damaging immigration plans – which risks inflicting hostile environment 2.0.”

Doogan continued: “At PMQs I warned the Prime Minister that my constituency requires four thousand seasonal workers alone – with neighbouring constituencies requiring a similar amount – so his plans for ten thousand isn’t even enough for Tayside let alone the rest of Scotland and the UK.

“If the Tory government continues to fail Scottish businesses, farmers and agriculture sector on this issue, then Holyrood should be given full control over immigration to build a fairer system that works for Scotland and meets our demographic and economic needs.

“However, it’s becoming increasingly clear that this is a Tory government actively acting against our interests. The people of Scotland must have the choice of a better future as an independent country.”