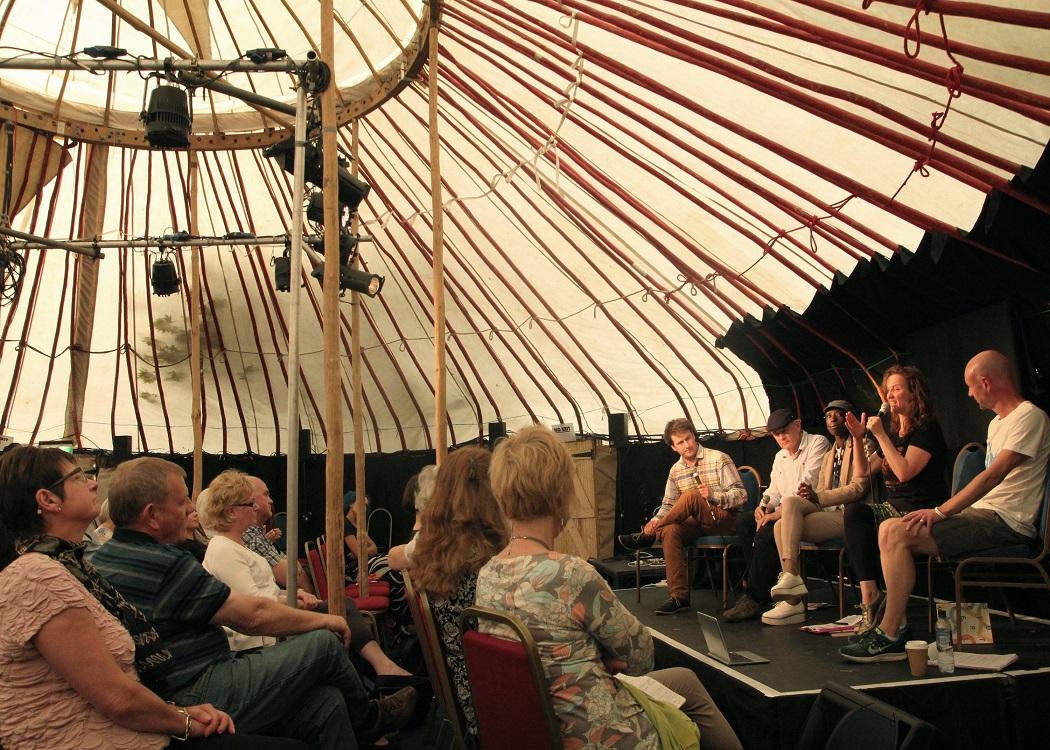 ALMOST everyone in the square is interested in the flyers and the blether – genuinely.

Up here we can talk things up very well now. Almost anything. Last year we learned and honed that skill. In fact it feels not so much a skill, more of a pleasure, part of our natural social interaction.

Even away from the flyering and the activist events, the politics will always come up. It’s accepted, it’s expected, at the bus stop, with clients, in the pub, and among the fairy lights and beers of this festival city right now.

Politics is accepted, it’s expected, at the bus stop, with clients, in the pub, and among the fairy lights and beers of this festival city right now.

Back to the flyering – We’re right in the middle of the festival month and flyer fatigue should be at its peak. You can barely walk a couple of metres in any public space in Edinburgh without a piece of paper or card being thrust in your face.

It’s a well used tactic of locals to avoid eye contact, bury our faces in our phones. But not one bit of it with the Rammyers – we know your moves, and our butterflies are just beautiful, enticing.

A transferable skill has been infused into most of us who bide here. Passion and involvement for all we interact with.

It’s not the Cambridge Footlights type luvvies, not the outlandishly dressed nor the public jugglers with their loud ostentatious ways who best snare the interest of the causal passer by.

It’s us who live here having the confidence and plenty of practice from last year. We spot people early who are looking for something. We’ve acquired that knack and dig into our magic box of approaches.

Last year we spoke to our family and our neighbours, the head teachers at our weans’ schools and the ubiquitous taxi drivers. This year it’s folks studying a programme or a chalk board of dates and times. Revellers having a drink and planning their day. Yet they’re not sitting ducks they want to be approached. They’re hungry for it.

We spot people early who are looking for something. We’ve acquired that knack and dig into our magic box of approaches.

The skill of passing around tables and engaging with folks on a one to one level? Quality. Local knowledge and blether? Irreplaceable.

We blew the dust off last year’s banter so very easily, talking and listening to our peers and those from further afield – our box of tactics overflows.

It’s about knowing that the middleaged, indistinct, couple about that you’re about to cross paths with might contain a wealth of knowledge or curiosity of all things cultural and political.

If they lived here last year they’ll want to reminisce and to look to the future too.

We admit we manage to flyer the bloke in the show after ours most days. Weel kent faces such as Lesley Riddoch and Alan Bissett are victims too as they amble along to our Yurt to take part.

They are hooked in before we even recognise them. But that’s enthusiasm for you. Well worth the red faces.

Selling ourselves as a Rammy, a smorgasbord, with room on the plate for all sorts is fun. Merging our Scandinavian neighbours’ language with the best of our home grown havering is a celebration.

The skill of passing around tables and engaging with folks on a one to one level? Quality. Local knowledge and blether? Irreplaceable.

And not one bit of negativity, not one offensive comment or derogatory remark – so many are interested and want to know more. They almost always know someone else who will be too.

Hail from Stenhouse or Hail from Stevenage? No problem. There is still work to be done. This time around it’s all the same, yet so different. Of course, the Jeremy Corbyn phenomena entices the curious into our world, helping our southern friends grasp it just a wee bit more.

As for the rammy itself – it’s an absolute delight to be involved in. The hosts Tam and Pauline welcome banter from everyone and you make the show.

My question about what message I might bring to a Labour leader hustings I am sent to this week met with some fantastic responses on and off the stage. Not all of which are printable, from the Artist Taxi Driver and an audience member who self declared as English/Scots/Australian and banged his head on a yurt pole in his enthusiasm. No damage done.

As for the rammy itself – it’s an absolute delight to be involved in. Tam Dean Burn singing our future national anthem is worth the ticket price in itself.

So if you want to sell your festival show or product or idea, find a Scot who is enthused by it and your thing will almost sell itself.

Tam Dean Burn singing our future national anthem is worth all the shoe leather and the ticket price in itself.

The Auld Reekie ground team are already hoachin with ideas for next year’s show. A front running word next time is carnaptious – as given to us by Stuart McHardy in his recent talk at Leith Common Weal group.

Do come and see the show. Every one that you miss is one you can never get back. Then dust down your interlocuting skills for Holyrood 2016.

You might just make some memories for ButterflyRammy 2 in 2016.

You can browse through some of the shows that have already taken place on our broadcast channel .