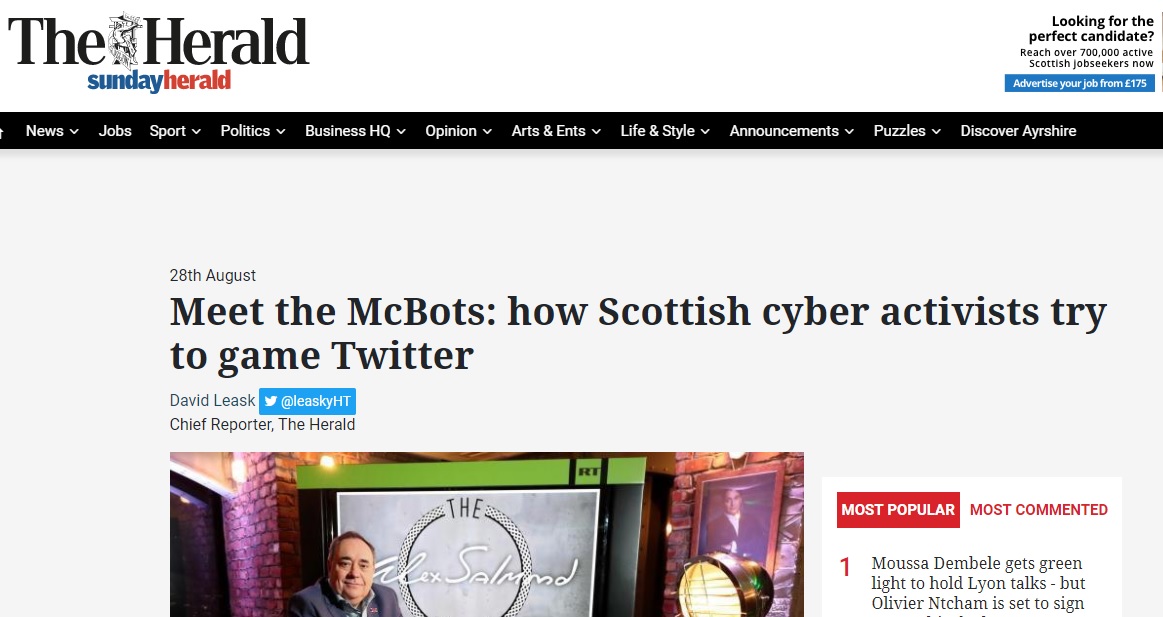 Sylvina Tilbury, an independence campaigner based in the Highlands who was accused of being a McBot on Twitter, argues that false accusations of this kind are derived from a lack of understanding and empathy with the feeling of alienation and marginalisation those in the grassroots of the independence movement have with the mainstream

IT’S been quite an eventful few days in the Scottish Twitter-sphere. A great deal of heat and not much light has been generated around the research of two self-declared internet experts who claim they have a methodology that can distinguish automated Twitter accounts, so-called “bots”, from real people.

One of those experts decided to test this out in real life by making accusations against a handful of accounts (apparently picked at random) that turned out to belong to real people, people who were understandably rather aggrieved at being singled out in this way and doubly annoyed when the person concerned refused point blank to respond to any requests for explanations, retractions or apologies. I know, I was one of them.

So what happened, and what can we learn from it?

Whether she realised it or not, the researcher at the heart of this storm managed to create an experimental microcosm of the current Scottish political climate. Unfounded accusations were made and the person who made them would not engage with those being accused and could not be reasoned with in any way.

This is essentially the same position that at least half of the Scottish population finds itself in every single day. We are repeatedly told that not only are we too poor to be independent, we are also a crucial part of the pooling and sharing of the UK. That the mismanagement of the UK economy which allocates us a 7.9 per cent deficit proves we are incapable of managing our own affairs.

That not only did we vote No because we were told we would otherwise be out of the EU, we also voted No in the full knowledge that an EU referendum was likely and that a Leave result was highly probable. We are accused day after day of being a blood and soil nationalist movement that wants to isolate itself from the world and hates the English, despite the fact that many of us are either English or married to English people and a large majority voted to Remain in the EU.

Over time this takes its toll, it really does. People become frustrated because they are being lied to, lied about and seem to have no right of reply via mainstream channels. They feel victimised and powerless, and this is not without consequences. The consequence is that the Scottish independence movement has created its own “safe space” on Twitter, an environment which it has achieved mastery over. Powerful use of hashtags, linking of like-minded accounts through following and re-tweeting, all serve to amplify the voices of ordinary people that would otherwise be drowned out by the almost exclusively unionist focus of the mainstream media.

This has apparently baffled some internet “experts” who find it impossible to believe that real people could have beaten the system and achieved so much exposure by themselves. The establishment feels powerless against this, and so the smears and attempts to discredit the independence movement get louder and shriller by the day culminating in the two “McBot” articles that appeared in Tuesday’s Herald (here and here).

That is not the end of the story however. For years, long before the media cottoned onto the new trend of pinning the blame on Russian (or in this case Scottish) bots, the independence movement has struggled to shake off the derogatory label of “Cybernat”. I’m sorry to say that this label is not always undeserved.

Most of the Twitter activity which pro-independence accounts are working hard to debunk en-masse comes from accounts that ‘post and run’, whether that be party accounts, individual politicians or partisan journalists. These accounts either never check their notifications, routinely mute or even block their critics, or are run by people with skin like rhino hide. Ironically they often meet many of the criteria used to identify a Twitter bot. However, the technique which works so well for amplifying the message of a grassroots movement does not translate well when the object of criticism, however justified that criticism might be, is an individual private citizen.

Both the Herald’s chief reporter, David Leask, and the researcher, dr Jennifer Jones, cited the cases of other pro-Indy women who have been the subject of what are commonly known as “pile-ons”, where a large number of people tweet very similar points and criticism in quick succession, some rather aggressively, sometimes going on for days at a time.

The problem is that a Twitter population on high alert, and feeling quite rightly aggrieved by some of the utter bile and garbage that is written about Scottish independence and its supporters every day, has next to no inclination to give the benefit of the doubt before all hell breaks loose. And when the tweet concerned is from an individual who does check their notifications and does care what people think about them, then this starts to feel like a personal attack. In a few regrettable cases the responses do step over the mark into the realms of personal abuse, and as a movement we must be clear that this is never acceptable, whether the abuse happens on the public timeline or, as is often the case, over direct messaging.

People are quite right to point out that such activity does not only affect female tweeters. During the recent furore over the “People’s Vote” rally in Edinburgh, both Rory Bremner and Femi Oluwole were subject to similar aggressive treatment. However, you only need to look at the numerous screenshots that Angela Haggerty has been sharing over the last day or so (mostly from a very different part of the political spectrum) to understand that there is a quite different, much more sinister dimension to many of the abusive tweets and messages sent to women.  Neither is this exclusive to Twitter, I don’t even want to imagine the state of the inboxes of high profile female politicians like Nicola Sturgeon and Mhairi Black.

So what does all this mean? Is the online Scottish independence movement a hotbed of abusive individuals and automated “bot” accounts? In both cases the answer is categorically no. The idea that the #DissolveTheUnion hashtag is being used to spread malicious propaganda via automated accounts is patently ridiculous. What the researchers have observed, and this has been proved over the past couple of days as more and more people have adopted the hashtag to poke fun at the research, is a real grassroots movement using the tools at their disposal to amplify their message to great effect. As for the aggressive activity that’s an unfortunate by-product of these online interactions, what we are witnessing here are real human reactions in an online world.  People generally don’t take too kindly to being misrepresented, even lied about, with no right of reply.

Yes, we should all try to exercise restraint from behind the keyboard, but don’t ask us to stop being human.