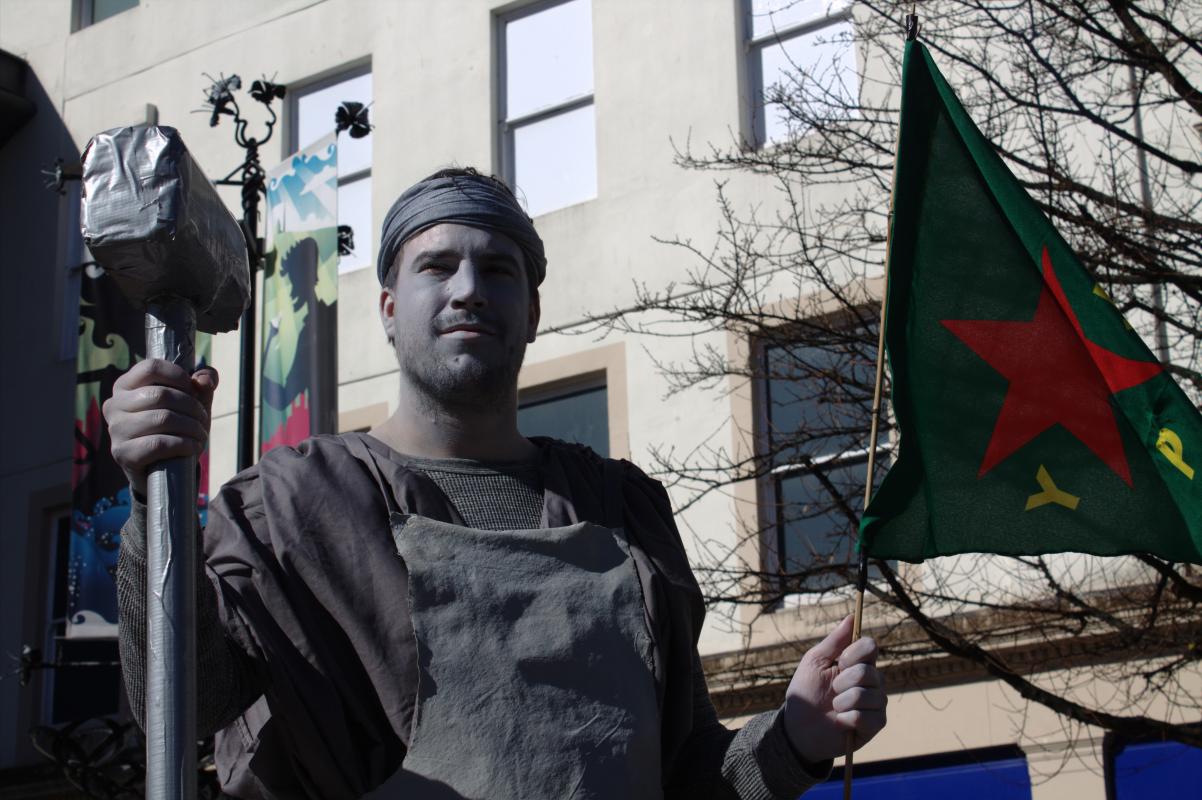 Human ‘statue’ of Kurdish symbol of resistance unveiled in Dundee

ACTIVISTS IN Dundee demonstrated solidarity with the Kurdish people in Northern Syria this Saturday (24 March) by unveiling a human ‘statue’ of Kawa the Blacksmith, a symbol of resistance.

Campaigners from Scottish Solidarity with Kurdistan (SSK) came together with the Dundee Trades Union Council to oppose ongoing Turkish aggression in the region.

READ MORE: Sarah Glynn: Meet the working class hero Turkey is trying to rip away from the Kurds

Following Turkey’s invasion of Afrin – one of three cantons which make up the Rojava region – in January, Afrin city fell to the invaders last week.

In a symbolic demonstration of the seizure of power, the soldiers pulled down the statue of Kawa the Blacksmith, a mythic Kurdish figure who represents the triumph of ordinary people over tyrannical rule.

In defiance of this move, Scottish campaigners produced their own statue of Kawa, in the form of a person covered in silver paint, holding his famed Blacksmith’s hammer in one hand, a Kurdish YPG (People’s Defence Units) flag in the other.

Speaking at the unveiling, Sarah Glynn of SSK explained: “Kawa is a mythical hero – an ordinary man who led the people against the tyrannical ruler who had captured their land, allowing the sun to shine again. He has become a symbol of Kurdish resistance.

READ MORE: “It should never have got this far”: Freed Kurdish leader’s arrest denounced by activists

“He is also associated with the return of spring, celebrated as Newroz on the spring solstice.That the statue was pulled down just a couple of days before Newroz was even more poignant.

“[This] made us think that the best way that we could demonstrate our solidarity with the people of Afrin, was to erect our own statue of Kawa in Dundee.”

Glynn said she had been inspired by the establishment of a new, grassroots democracy in Rojava, and condemned the UK Government and international community for its silence on Turkey’s actions.

“When I first heard about Rojava, the autonomous Kurdish region in Northern Syria, I felt as though I had found what I had been looking for,” she said. “We in Scotland had been proclaiming that a better world was possible, but here were people actually creating one.

“A world that really did put people – and community – before profit. And a world where people were taking real control of their lives and their society through a bottom-up democracy.”

Glynn highlighted the role of Kurdish fighters in pushing Isis out of the region after they invaded the city of Kobani, and said the area had become a “beacon of hope” in the midst of the Syrian war.

In January of this year, Turkey invaded the region in a bid, President Erdogan said, to push out the YPG, which the Turkish state claims has links to terrorism.

While the PKK (Kurdish Workers’ Party) in Turkey are classified as a terrorist organisation by the EU, USA and UK, this is not the case with regards to the YPG, which was supported by the USA in its efforts against Isis.

Gynn said that the Kurds were not able to protect themselves against the Turkish army, and criticised the “big powers”, who were “happy to see the Kurds defeat Isis”, for failing to act on their behalf or condemn Turkey’s actions.

“Our government parrots Turkish propaganda and sells Turkey arms,” she said. “They can act that way because not enough of us know what is happening.”

This, Glynn said, is why the campaigners were seeking to raise awareness of the situation.

Now, she added, the future of the Kurds and democracy in Northern Syria hangs in the balance. “Afrin residents have now joined hundreds and thousands of other refugees, and Turkey is thirsting to invade further into the Kurdish areas of Syria, and cast a longer shadow on the hope that is Rojava,” she said.