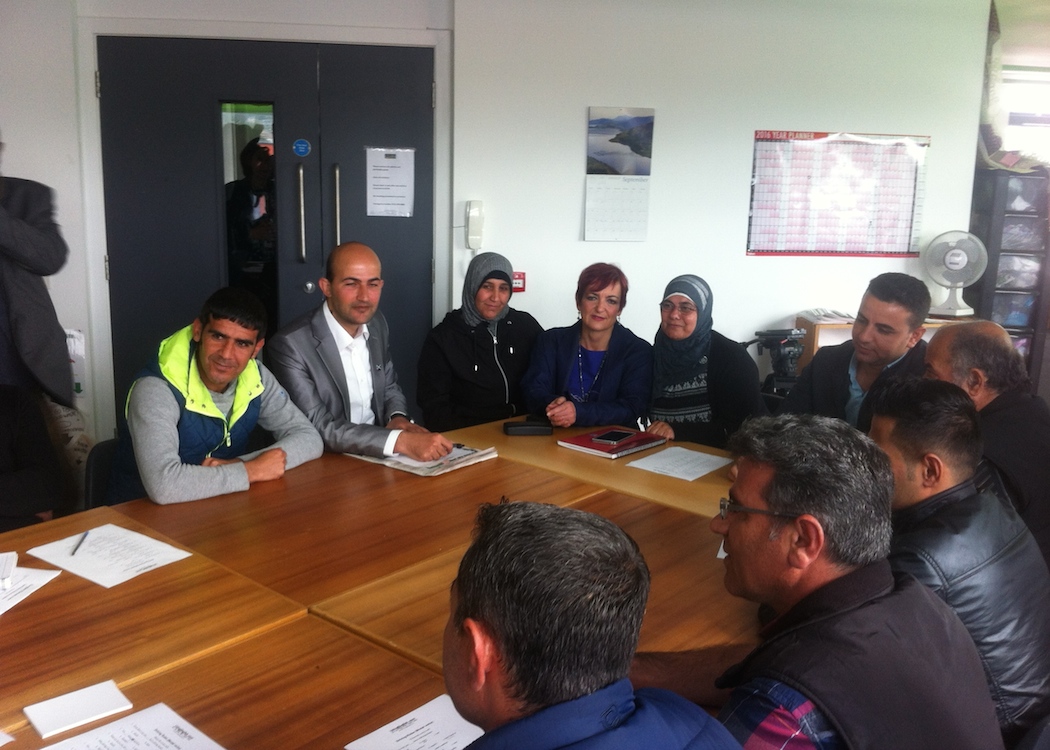 Through translation, two refugees from Syria speak to CommonSpace about their new life in Edinburgh

KAWTHAR SALOOM, 48, is one of a dozen Syrian refugees engrossed in an English lesson. This time it is about owning a car. Drink driving, seat-belts, traffic lights, taxes … all are covered to meet a dual purpose of teaching basic language skills, while introducing aspects of life in Scotland.

However, this is a less ordinary lesson. The event is also a media presentation, and a welcome event for government and council politicians. Minister Angela Constance and David O’Neill greet each member of the lesson in turn, as part of the recognition that Scotland has welcomed 1,000 refugees from Syria in the past year.

Saloom was one of the earliest to arrive in Scotland through the resettlement programme, arriving in the cold of December 2014 with three of her four daughters. Her fourth remains in the refugee camps of Lebanon.

“In the beginning when they arrived here the people at the airport were so welcoming and they felt overjoyed with happiness,” she explains. “The first week was a bit difficult for them until they started to get used to people and to settle down and understand the system and what is going on here.”

Saloom and her family fled Homs, one of the city’s most brutalised by the Syrian civil war. A three-year siege between the regime and rebel troops brought a world of fear and violence to what was one of the country’s largest and most vibrant cities.

“This is the hope for all Syrian families – to be able to bring their families back here.”

“There were so many bombs around their area, so their home [was] somehow destroyed. At that point they were arresting so many people, so her husband was arrested. And she doesn’t have any other people like men or family to help her,” she explains.

“Once he was released they decided to get out. That’s mainly because she was looking for education for her daughters in Lebanon. But when they went there the education was absolutely nothing in Lebanon. One of her daughters had health issues. Now they are working to resolve that problem.”

While arriving in Scotland has brought some security, it has still left her family divided with one daughter still in Lebanon. “This is the hope for all Syrian families – to be able to bring their families back here,” Aktar says.

But stability in Edinburgh has brought happiness, and stability for a new life for Saloom.

“Her daughters are very happy at school, and they are settling down and people there are caring and loving them. They are integrating with other children at the school,” she says.

“He would like to speak the language today, and tomorrow go to work.”

It’s also given her opportunities to start to feel at home in a new city and country.

Hassan Alish is another member of the class working his way through a new curriculum.

Laughing while explaining in Arabic, Hassan adds: “[I’m] very happy for the ambulance people because a few days ago a fire happened next to [our] house and [we] were amazed how quickly it arrived. This was a completely different experience to back in Syria.”

Explainer: 5 problems with the way the UK treats refugees

Similar to Saloom, the English lesson are providing a crucial outlet for him.

“[I] only did the primary school [level of education] so it’s quite difficult to get back and learn a new language,” he explains. “His friend worked for 40 years in Syria and now he finds it hard to get back to jobs because of the language barrier,” the translator explains.

His immediate hopes can be summed up in two words: language and work. “He would like to speak the language today, and tomorrow go to work. They would like to get back to jobs because they all used to work back in Syria and now they find it so difficult because of the language.”

Over 1,000 people pass through The Welcoming centre in Edinburgh – an education support group – on a similar journey each year. With the world’s wars and flows of refugees only expected to increase in future decades, that challenge of compassion is set to continue.