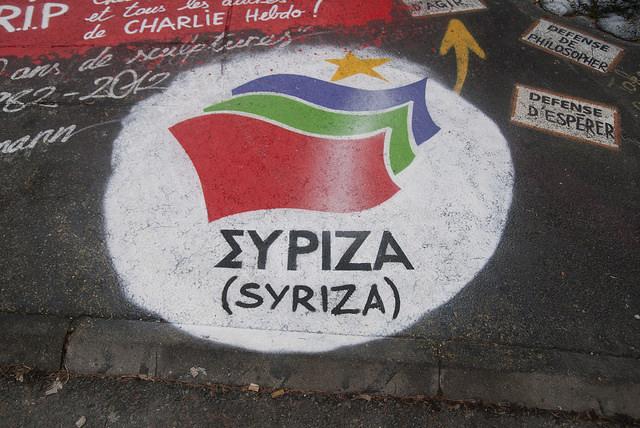 As Europe celebrates the election of the first anti-austerity government it’s worth examining how SYRIZA broke through to take power. With its roots in the Communist Party of Greece, there will be many misconceptions about SYRIZA. It is, rather than an authoritarian party in the Stalinist tradition, a party that exemplifies later communist thinking on popular movements. Having rejected instructions from Moscow, the main group in SYRIZA (and the one to which Alexis Tsipras belonged) developed its own approach to politics that relied much less on small groups seizing power, and much more on developing a popular movement to change society.

This approach has its origins in the Popular Front formed in Spain to defend the Spanish Republic against Franco’s right wing forces. This brought together communists, social democrats, anarchists and even liberals in the fight against Franco. It created a politics that worked beyond the ideological strictures of the previously divided left. While the Popular Front in Spain failed both at working well with other forces and at stopping Franco, it showed communists that they could work across ideological differences. It’s important to note that anarchists were particularly badly treated by communists, as George Orwell observed at first hand and described in Homage to Catalonia.

This strand of thought was particularly dominant in the Italian Communist Party, drawing as it did on the work of founding Italian Communist Antonio Gramsci. And it manifested itself in the broad working that allowed communists to transform cities like Bologna and Florence. Communists worked with the rest of the left to build a broad movement that allowed them to deliver the best government in Italy at the time. They provided universal free child care and free public transport. This became known as Eurocommunism, and became the dominant stream in many other communist parties in Europe, including the Communist Party of Great Britain. It was the Italian Communists that recorded the previous best result by a communist party in a major European country, with 34.4% in 1976. This reflected their reach into popular movements, and the ability to build an alternative to the capitalist status quo.

In the UK the Communist Party of Great Britain, shut out of electoral politics by the First Past the Post system, focused its energy on influencing the Labour Party through Trade Unions. Later this became a broader focus on social movements. The movements for women, gay rights and the environment all had Communists in leadership positions. Indeed, the lead character (Mark Ashton) in the film Pride about solidarity between the gay community and miners during the miners’ strike was General Secretary of the Young Communist League.

The basis of this approach was to build mass movements that could support and hold to account the governing coalition. It wasn’t enough to win an election and seize power. Politics had to work in Parliament and on the streets. And the movement should be antagonistic to its party, ensuring that there is always pressure to deliver for the people. All of this suffered a major setback with the end of the Soviet Union in 1991. While communist parties in countries like Greece, Italy and the UK had long distanced themselves from the Soviet Union, there was still a great deal of soul searching amongst communists. Many of the lessons learnt about working as a popular front, with other organisations were forgotten.

The radical left was replaced by a ‘Third Way’ approach to politics, characterised by New Labour in Britain and the ‘new middle’ of Germany’s social democratic SPD. Third Way politics encouraged the electorate to leave politics to the experts. It ignored popular movements (most notably the anti-war movement in the UK in 2003) and drove people away from engagement. The result was increasing capture of state apparatus by big business and a collapse in interest in politics, with consequent low turnout in elections.

It has been a long way back for movement politics on the left. But with the election of SYRIZA, and the Scottish independence referendum, we are beginning to see the revival of this tradition. Instead of the tired triangulation and centrism of the social democratic parties SYRIZA and parties like PODEMOS in Spain are developing a new politics that draws on the movement politics developed in the 1980s.

It was of vital importance to the largest grouping in SYRIZA (Synaspismos -Coaliton of Left, ofMovements, and Ecology) that they widen their coalition. This coalition of forces included other parties of the left, but perhaps more importantly, the anti-austerity Green Party joined just before the 2015 election, gaining their first MP. In return SYRIZA accepted the Green Party’s manifesto in whole. This is Europe’s first Green government.

What we need are parties that act as an expression of popular movements. This is a fundamental break with the technocratic and elitist politics of the 1990s and 2000s. It’s a politics that we realised partially during the referendum in Scotland. It’s a politics that must be nurtured through difficult times in government in Greece. And it is a politics that can begin to reengage people with decisions that are essential to their lives. Where the Third Way parties saw ignoring the public as evidence of their ability to govern, we need parties that are beholden to the movements that produce them.

We can see in the campaigns for equal marriage, against TTIP – the Transatlantic Trade and Investment Partnership (a classic piece of technocratic politics) and Fracking the beginnings of a movement politics. In the referendum, Women for Independence, Generation Yes, National Collective and Green Yes were expressions of this movement politics. That this fed into an increased membership of the SNP, Greens and SSP shows people want a Parliamentary expression of this politics. And we are beginning to see the parties shape up to this challenge on issues like equal marriage, fracking and TTIP. We need to build a popular movement that brings together Trade Unions, the women’s movement, the environmental campaigns, the LGBTIQ movement and other social movements to ensure we take back our politics from big business and the global elite.