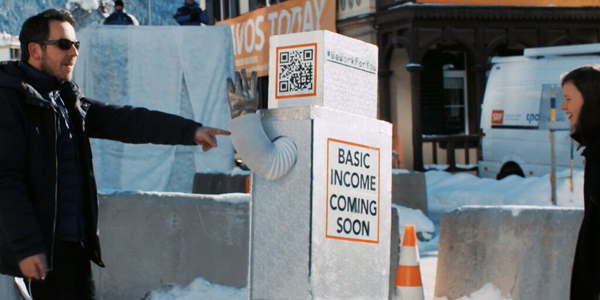 TAKE ONE ACTION MUST BE SOOTHSAYERS. How else could they have known to close their film festival with a feature documentary about unconditional basic income (UBI), a week after the Scottish Government announced it would begin to look into such a scheme for Scotland?

That’s what Take One Action does. An annual cinematic event taking place in Edinburgh and Glasgow, with smaller versions in Aberdeen and Inverness, it broaches the big questions of our time in our societies and environment.

As UBI becomes an evermore familiar discussion in politics, it’s only right to end the festival with Free Lunch Society. It’s a profile of the idea’s history, and of its potential future.

The concept of free money rubs a surprising amount of people up the wrong way. One commentator simply decries it as un-American. Others think UBI is the future of democracy. Machinery is replacing humans in the workplace, meaning labour is harder to come by, and at the expense of an income.

The concept of free money rubs a surprising amount of people up the wrong way. One commentator simply decries it as un-American.

The concept separates labour from income, but that in itself is an intimidating prospect considering the time and effort put into making them co-exist as best as can be in our current socioeconomic landscape. Would the laws of work be rewritten if everyone became less reliant on employment to survive?

Free Lunch Society takes all of these hopes and fears and looks at where they have been implemented before. UBI is not without precedent, and exists for different reasons. Rather than see it as something alien and radical, the film welcomes the idea of change, unimpressed by the status quo and wondering if such a major shift in living would really be such a bad thing.

Executive director of Take One Action Tamara Van Strijthem says of the film: “As a Festival focusing on global change, we are particularly interested in stories that shed an inspiring light on pressing social issues or provide new perspectives on the world – and our place within it.

“A Universal Basic Income could profoundly transform our relationship to work, money and time, altering our sense of purpose and our freedom to dedicate ourselves to the causes we believe in. Free Lunch Society is a brilliantly accessible foray into a potentially radical shake-up of our social structures. We’re really honoured to be closing our tenth festival with such a topical film for everyone in Scotland and are looking forward to a lively post-screening conversation with fantastic guests.”

These specialist line ups can be powerful in their activism, deafening in their protest, and urgent in their warnings.

Ten years into its life, Take One Action is going from strength to strength by always showcasing cinema relevant to what is happening now. Alongside Free Lunch Society, there are features like Stranger in Paradise about the relationship between refugees and the EU.

Theater of Life looks at the ignored possibilities of food wastage that leave homeless people hungry, despite means of feeding them being readily available.

Thank You for the Rain is about climate change affecting farming in Kenya. As the news is dominated by storms unlike anything seen in modernity, it is a reminder of the global effects of climate change, and how it is impacting our ways of living.

Full listings of Take One Action’s programme can be found here, with details of all guests (including Lesley Riddoch for Free Lunch Society) and post-screening discussions. The Edinburgh and Glasgow programmes run from Wednesday 13 September until Sunday 24 September.

Film festivals are an amazing way to immerse yourself in experiences you may never otherwise have. At the big ones, the Glasgow and Edinburgh Film Festivals, this typically means independent cinema and foreign films. Between those events are these specialist line ups which can be powerful in their activism, deafening in their protest, and urgent in their warnings. Take One Action does all of this and more, and it’s right on our doorstep.