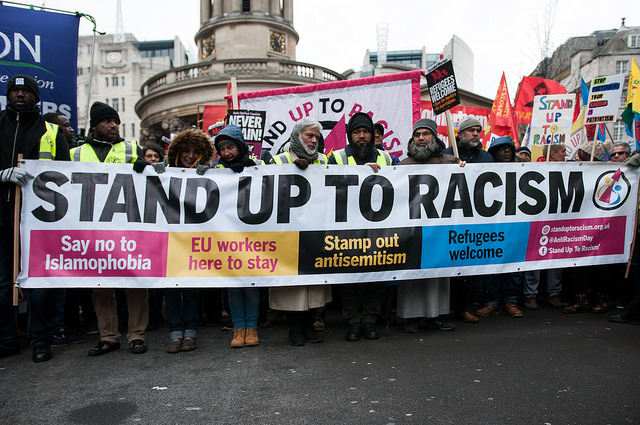 Talat Ahmed, convenor of Stand up to Racism Scotland, defends the organisation’s approach ahead of its demonstration on Saturday [16 March] in Glasgow, after criticism published on CommonSpace from pro-Palestinian activist Mick Napier about the anticipated participation of Glasgow Friends of Israel on the march

THIS Saturday 16 March tens of thousands of people in 22 countries and more than 60 cities across the world, from Warsaw to Washington DC, will march against racism and fascism around UN Anti Racism Day.

In Britain demonstrations in London, Cardiff and Glasgow called by Stand Up To Racism (SUTR) and backed by the trade union movement will demonstrate our confidence in our values of respect and equality for all, for multiculturalism, strong cohesive communities and peace.

Saturday’s demonstrations could not be more timely. Racism and fascism are on the rise across the world. Far right political leaders such as Victor Orban in Hungary, Trump in the US and Bolsonaro in Brazil are stoking up hatred and hostility to refugees and minorities such as the LGBT community.

In Britain Theresa May’s ‘hostile environment’ has fuelled a racist environment which has resulted in the Windrush scandal and the growth of a neo-Nazi street movement around Tommy Robinson.

Fortunately growing numbers of people understand the threat posed to us all by the racists and neo-Nazis and are working hard to build Saturday’s demonstrations.

Given the amount of ‘fake news’ around this issue on social media, it is unfortunately necessary to re-state (again) that no invitation has ever been issued at any time by SUTR Scotland to COFIS to participate on this demonstration nor is there any formal relationship between COFIS and SUTR.

The proposal from Scottish Palestine Solidarity Campaign (SPSC) that SUTR should ban COFIS from taking part in Saturday’s demonstration is not the answer.

According to a 2015 poll, nine out of ten British Jews support Israel’s right to exist as an independent state. The British TUC and most British trade unions support a two-state solution which also involves recognising Israel’s right to exist. And of course the British Labour Party and the Scottish National Party run Scottish government have signed up to the IHRA definition of antisemitism. Should members or supporters of these organisations also be banned from Saturday’s march?

If the criterion for the march is opposition to the existence of the state of Israel, then it will be a very small demonstration indeed!

The reality is that there will be many issues on which those marching on Saturday will disagree: not just Israel and Palestine but also Brexit, Scottish independence, Jeremy Corbyn and many others. What unites them, however, is a recognition that Islamophobia, antisemitism and anti-Roma racism pose a greater threat to us all but especially to these minorities than at any time since the 1930s and a willingness to put these differences aside in order to build a mass united anti-racist movement that can drive the racists and the neo-Nazis back into the gutter that they came from.

The SPSC insisting the rest of the anti-racist movement adopts its analysis that the issue of Palestine is the defining criteria is a mistake. A similar attempt in London recently to insist that to oppose fascist Tommy Robinson you must also be anti-Brexit thankfully failed and united counter demo outnumbered his three to one.

At a time when Robinson is visiting Scotland looking to build his forces we must fight for maximum unity here. As SUTR has stated many times the key criteria for Saturday’s march in Glasgow are opposition to the rising tide of racism, Islamophobia, antisemitism and the scapegoating of refugees and migrants.

If you support these principles please join us and the #worldagainstracism demonstrations against the far right internationally. Unity is our strength.