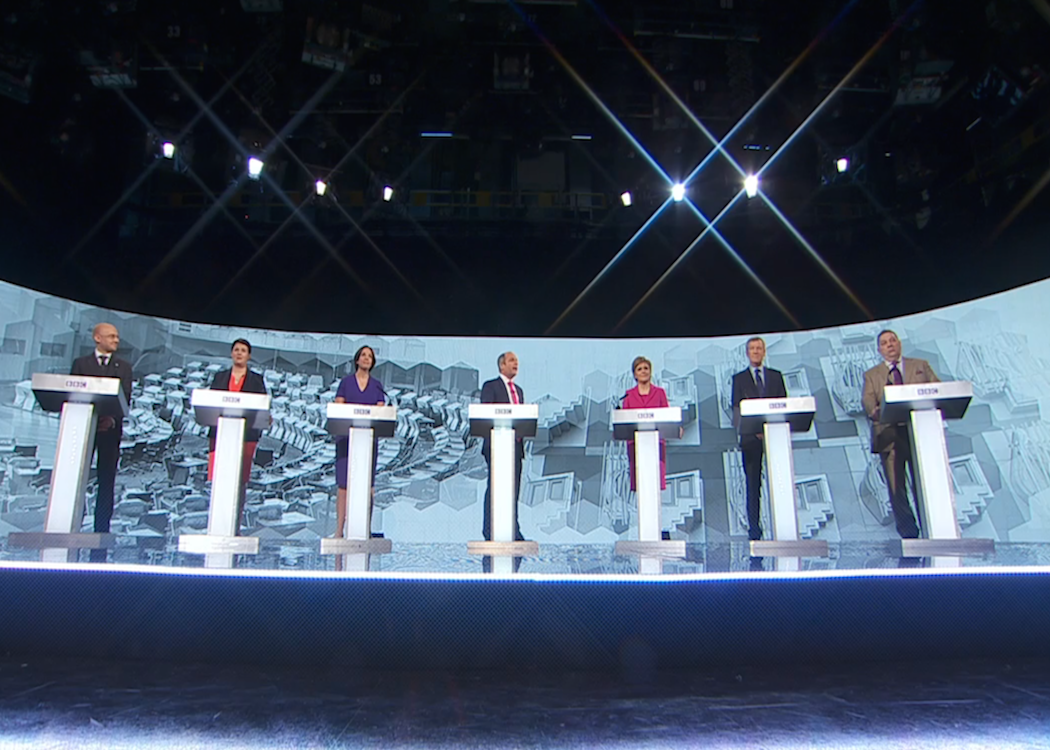 THE SCOTTISH ELECTION CAMPAIGN took off tonight in Glasgow [Thursday 24 March] with party leaders split on how to raise extra revenue to support public services.

With the Scottish Parliament set to gain more tax powers than ever before, the majority of party leaders pledged a more ‘progressive’ form of taxation when full control of income tax bands and rates begins from 2017/18.

The Scottish Greens, Labour and the Liberal Democrats pledged support for higher taxes on the wealthiest individuals, with the SNP saying it will not pass on Tory tax cuts if the party is re-elected.

First Minister Nicola Sturgeon was pressured to justify maintaining the Tory income tax rate of 45 per cent for the 17,000 people in Scotland earning over PS150,000 a year.

Labour leader Kezia Dugale accused the SNP of running scared of the rich and rolling back on previous support for a more progressive tax system.

However, Sturgeon warned that a higher rate “might lose us PS30m” and, overall, her tax plans were “balanced and sensible”.

Yet she did not rule out implementing a higher rate if the practical advice changed: “I think there should be a 50p rate of tax,” she added.

Scottish Green co-convener Patrick Harvie recommended a broader appraisal of tax policy through replacing the council tax: “We need to be ready to scrap the council tax…it’s more than 20 years out of date.”

He backed higher taxes to “close the wealth gap as well as the income gap and that means local taxes too.”

Discussion of tax merged with wider discussions on the economy – where the Scottish Government holds substantial influence through it’s multi-billion pound enterprise agencies.

Labour and Liberal Democrats both advocated an immediate 1p tax rise in the first year of the parliament for greater education funding, that would apply to everyone paying income tax.

The Tories opposed any tax rises – meaning that Westminster cuts would be passed on in full.

An audience member, during the tax debate, said that she wanted a high standard of living for people in Scotland – and that meant the public had to be willing to pay for it in progressive taxes.

The debate, on front of a 150-strong studio audience, placed SNP, Labour, Tory, Green, Liberal Democrat and Ukip leaders against each other in an early campaign showpiece.

Discussion of tax merged with wider discussions on the economy – where the Scottish Government holds substantial influence through it’s multi-billion pound enterprise agencies.

Candidates were asked how they would respond to a phone call from extreme right-wing presidential candidate Donald Trump. Few of the party leaders expected a call.

One audience member called for a end to subsidies and grants for tax avoiding, poverty paying corporations like Amazon – which the Scottish Government has given tens of millions of pounds over the past decade.

Harvie called for “tax dodging companies to pay their fair share” – although the powers to enforce this in Scotland remain limited.

An audience member said Davidson had a “wee bit of a cheek considering all the cuts that are happening” when discussing social security.

Davidson joined with Ukip to advocate fracking, but Harvie led the charge in warning that more fossil fuels extraction would be destructive for the environment with the threat of climate change looming.

While Sturgeon did not guarantee a full ban, her rhetoric leaned towards a ban if any evidence of environmental damage emerged. An audience member and Labour leader Dugdale both stated that there was overwhelming scientific evidence against fracking.

In the final ‘comedy’ question, candidates were asked how they would respond to a phone call from extreme right-wing presidential candidate Donald Trump.

Few of the party leaders expected a call – and all leaders condemned Trump’s racist politics.

The final TV debate, also hosted by BBC Scotland, will be just days before the Thursday 5 May polling day on Sunday 1 May.