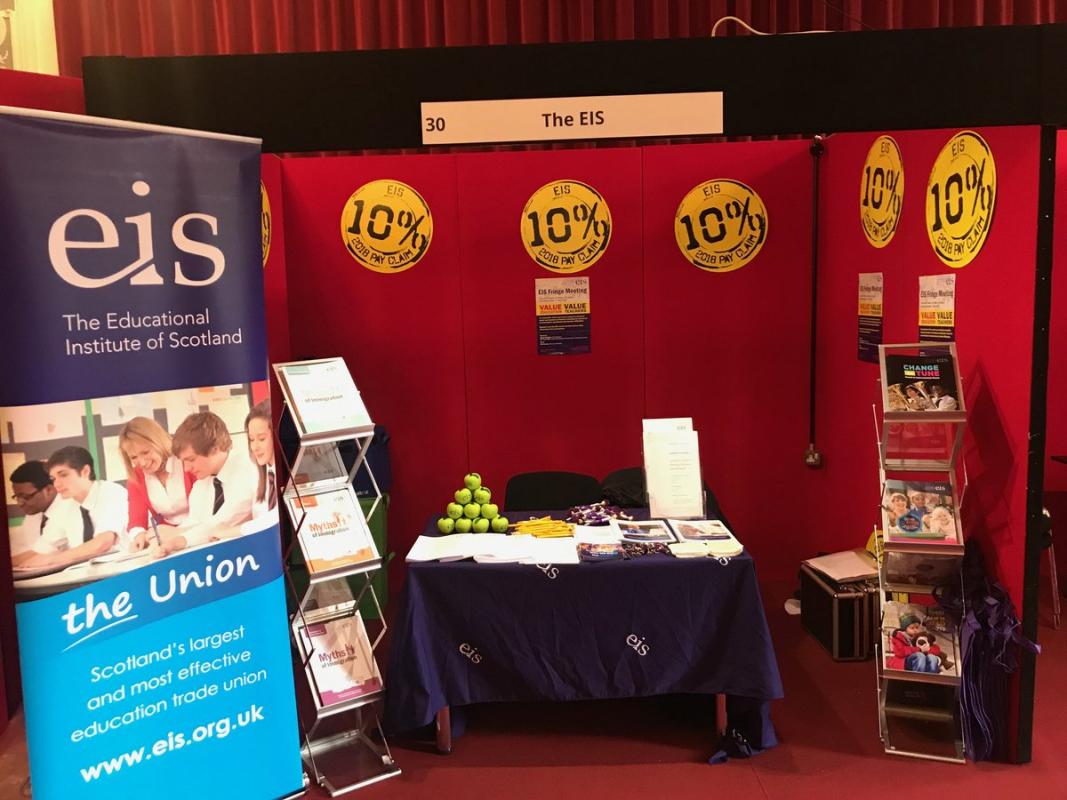 New offer includes agreements on other issues, including teacher workload

THE EIS teachers’ union is recommending to its members to accept a new deal on pay with the Scottish Government, after Education Secretary John Swinney upped his offer in advance of a strike ballot which had been set for Monday [11 March].

The new offer is a three year settlement which will see a total uplift in teacher pay of 13.5 per cent, and with the inflation rate slipping below two per cent for the first time in two years last month, it amounts to a significant increase in disposable income for teachers, who had faced a decade of declining incomes from austerity.

Swinney’s last minute offer – 3 per cent for the past year, 7 per cent next year and 3 per cent the following year – came after two previous offers which the Scottish Government had said was final, and increases the overall offer by 1 per cent.

The dispute had appeared to be heading inevitably for industrial action following a 98 per cent vote to reject the deal in November last year. That followed one of the largest demonstrations of teachers in Scotland’s history, with 30,000 marching in October calling for the Scottish Government to “value teachers”.

The union had been campaigning for a 10 per cent increase in teachers pay, saying that not only was it what teachers deserved but that it was necessary to tackle teacher shortages by attracting more people into the industry.

“It has been secured through strong campaigning delivered through the committed collective stand taken by Scotland’s teachers.

“By standing together and remaining united, our members have secured a strong deal for Scotland’s teachers which will also deliver stability and security for Scottish education.”

“Throughout the campaign it became increasingly clear that, in addition to pay, teachers also have serious concerns about issues such as the recruitment and retention of teachers, professional development, workload and the level of support for pupils with additional support needs. These issues then became a factor in the ongoing discussions.”

First Minister Nicola Sturgeon had said Education was what she wanted to be “judged on” over the 2016-2021 parliamentary term, and Swinney said that the “landmark agreement” will “provide the stability we need to make the reform Scotland’s education system needs”.

Swinney said: “Given the importance we place on valuing teachers and improving the attractiveness of the profession, I have looked again at the investment the Scottish Government is making.

“I am prepared to increase the funding for restructuring pay grades from three per cent January to four per cent April 2019.

“That would mean teachers will see a minimum 10 per cent increase between January 2018 and next month, and a further three per cent from April 2020, before any salary progression is taken into account.

“This landmark agreement brings together a partnership with local authorities and professional associations to tackle critical issues, in tandem with a settlement on pay.

“Given the importance we place on valuing teachers and improving the attractiveness of the profession, I have looked again at the investment the Scottish Government is making.” John Swinney

“It is an agreement that removes the threat of industrial action, will provide the stability we need to make the reform Scotland’s education system needs and deliver the best possible outcomes for our young people.”

“This is great news for Scotland’s overworked and underappreciated teachers, after a near 25 per cent pay cut over recent years. The Greens have supported teachers from day one because we recognise the pressures they are under, particularly given the three thousand colleagues and thousands of support staff they have lost at the same time as workload has exploded. This pay offer goes some way to recognising that.

“This is great news for Scotland’s overworked and underappreciated teachers, after a near 25 per cent pay cut over recent years.” Ross Greer

“Late last year around 30,000 teachers marched in Glasgow, asking the Scottish Government to value education and value teachers. I was privileged to address that incredible crowd and I think was clear to John Swinney from that day onwards that this was a campaign the teachers were going to win.”

“This is a positive development, nobody wants to see strikes in our schools, now it is up to teachers to decide if the offer is acceptable.

“However, it should never have come to this, and it should not have taken John Swinney nearly two years to listen to what teachers are saying about pay erosion and workload.”