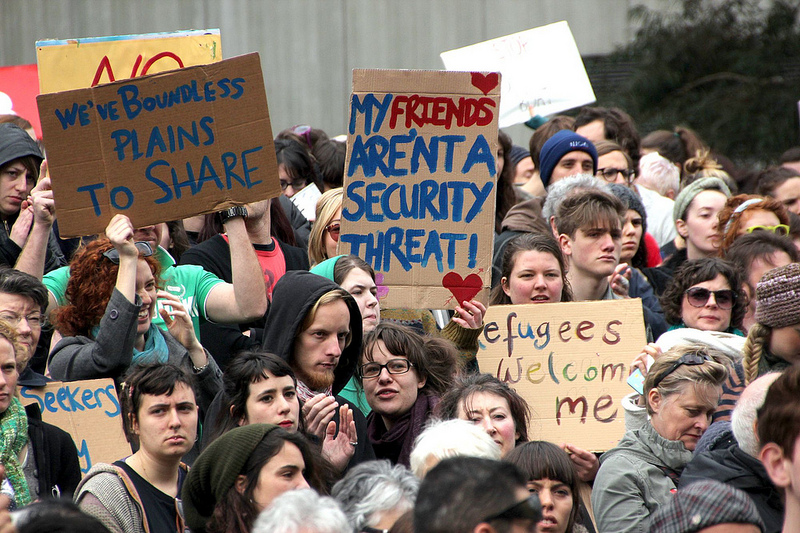 GLASGOW lawyers have won a temporary reprieve for asylum seekers threatened with homelessness after Serco confirmed no evictions would take place whilst the court battle over the legality of the evictions took place.

Govan Law Centre was scheduled to ask Scotland’s supreme court, the Court of Session, for an interim interdict on Tuesday morning [7 August], but the hearing was postponed after negotiations with Serco lawyers.

A similar understanding was reached after action by Glasgow Sherriff court, with Serco saying that it would not issue any further notices until the court had clarified the matter.

Speaking after he received the confirmation from Serco on Monday [6 August], GLC solicitor advocate Mike Dailly said: “Serco’s lawyers have written to GLC this evening to formally confirm that no eviction proceedings will take place against our client and her partner.  Accordingly, there is no need for an interim interdict hearing at the Court of Session tomorrow morning in Edinburgh, but our client’s court action will proceed in terms of the legal principles in dispute. “

After extraordinary pressure from campaigners, Serco agreed to give those six asylum seekers who had already been given ‘lock change notices’ a period of 21 days to allow due process to be followed.

Both Shelter Scotland and GLC argue that the 21-day temporary reprieve offered by Serco will be inadequate to allow time for the complex areas of law to be properly debated. and both legal teams have said it is likely they will seek a further delay to the evictions.

Living Rent, who have been coordinating the grassroots opposition to the evictions, welcomed the move by Serco but stressed that it was only temporary: “We welcome this decision by Serco to put a temporary halt to any lock changes, but let’s be clear it’s temporary. This concession from a multi-billion-pound multinational has only come about through the combined mobilisation of ordinary people and dedicated organisers; this belongs to the people and its only through our continuing mobilisation that we can ensure this victory is seen through.

“The best way to ensure a victory in the courts is to show that the ordinary citizens of Glasgow are ready to take to the streets in defence of their neighbours no matter what. We have been planning and building up our capacity for neighbourhood defence all week in preparation for Serco’s attempt to evict people, we have seen a massive response from the people of Glasgow who are rightfully horrified and angry at these plans by Serco. In less than a week we have already shifted the balance of power – over the next 21 days we need to gather our forces to finally show Serco and the home office that we mean business”

Also campaigning alongside Living Rent, Robina Quereshi from Positive Action In Housing said: “Whatever the legal outcome, Scotland has to ask itself whether it is morally right for a civilised country to create a humanitarian crisis on our streets, where women, children, the elderly and sick are left destitute.

Read More: ‘I am only Rahman from camp number 16’: The story of a ‘citizen of nowhere’ on hunger strike to keep the Serco wolves from the door

“Glasgow is now the frontline of the new hostile environment.  We have taken in waves of immigrants before, from the Highland clearances to immigrants from the Irish famine and now the global refugee crisis. We need immigrants.”

Glasgow City Council leader Susan Aitken met with UK Government immigration minister Caroline Nokes today, although limited details about the meeting have been made public CommonSpace understands that the ongoing crisis was to be discussed in detail.

The Scottish Government will also meet the immigration minister on Wednesday [8 August], and a spokesperson said they will continue to work with partners to ensure the Home Office meets its responsibilities: “The current situation in Glasgow is a human rights issue which people across Scotland have quite rightly shown outrage at. We will continue to press the UK Government to fix their failing system to ensure that people at the end of the asylum process are treated in a way that respects their dignity and rights.

“The Scottish Government is working with partners to try and ensure that the Home Office lives up to its responsibilities and that support is in place for people under threat of eviction. We expect the Home Office to work with all the relevant agencies to find a long-term solution to ensure the current situation cannot happen again.

“The Home Office also need to ensure equity of funding for Scotland’s local authorities like Glasgow which is a dispersal area, and full involvement of stakeholder organisations.”