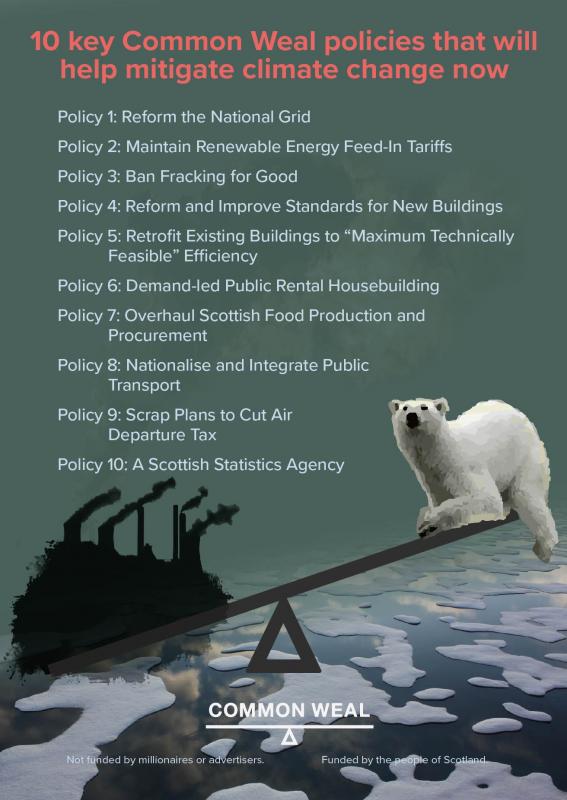 The International Panel on Climate Change has published a special report on the impacts of global warming surpassing 1.5oC above pre-industrial baseline levels.

This report details the current projections for the world if we continue to ignore the magnitude of the climate change problems ahead for the world as well as strategic pathways for limiting warming below that 1.5oC threshold.

Common Weal has published many policy papers which deal with the causes of climate change – from energy policy, through transport policy and social polices. The need for change is growing increasingly urgent and while some governments may wish to talk about big plans to come at some point in the future, we recognise the need for action now. This briefing outlines ten Common Weal policies that the UK and/or Scottish Governments could implement now to help to meet the targets laid out by the IPCC.

The current grid was built for the age when it was easier to move coal by train than it was to move electricity down a wire. Power stations are encouraged to be built near major population centres (i.e. near London and the South East of England). If a 1MW generator is built in Cornwall the owner will receive a subsidy of nearly £5,000 per year from the National Grid. If the same generator is built in Caithness, it will have to pay a fee of £24,000 per year.

The energy sources of the future are wind, waves and solar. These cannot be moved – generators need to be built where they are. And Scotland has these sources in abundance. If Scotland is to fully embrace its renewable future, then the National Grid must be devolved or reformed to stop acting against it.

The UK Government currently plans to scrap all renewable energy feed-in tariffs from March 2019. This would be a disastrous move for the Scottish renewable energy industry and would particularly impact small schemes like rooftop solar generators and community wind turbines. Scrapping these tariffs is utterly at odds with any notion of transitioning to renewable energy and so this proposal should be cancelled immediately.

Whilst the Scottish Government continues to maintain a moratorium on shale gas extraction by hydraulic fracturing – popularly known as ‘fracking’ – the UK Government is still very much in favour of the policy and protesters against the policy have recently been jailed. Scotland very much leads the way in this area but with the IPCC recommending that almost all hydrocarbon extraction be halted within a few decades, it makes no sense to be opening up new wells. The UK should follow Scotland’s lead and ban fracking permanently.

Around 50% of all energy use in Scotland is used for heating buildings. There is no technical reason why new buildings cannot be constructed to “passive” heating standards. The heating bill of an average sized house built to passive standards in Scotland is typically around £12 per month. The principle issue blocking construction of passive buildings is regulatory with the private market only ever building to the minimum compliant standards in order to maximise profits. If the Scottish Government mandated that all new buildings in Scotland must be constructed to passive standards then supply chains would adapt (or could be assisted with adapting) and the new standards would be met.

Existing buildings must be retrofitted in order to reduce their heating burden. Current Scottish Government proposals include retrofitting all existing buildings to meet EPC Band C energy efficiency standards by 2030 but this is insufficient to meet IPCC targets. Improving those buildings again before 2050 would involve two or more rounds of retrofitting. Whilst it is recognised that some older buildings will never meet passive heating standards, a more efficient solution would be to assess every building and retrofit it to its “maximum technically feasible” potential. Instead of improving a house to Band C efficiency in 2030, Band B in 2040 then Band A in 2050, it would be easier and cheaper to simply improve it to Band A immediately.

Whenever the current generation of politicians discuss building public rented housing, the conversation is often dominated by arbitrary housebuilding targets with more concern about “one-upping” the opposing party than selecting location or building appropriately. The proper application of the Scottish National Investment Bank and newly announced Scottish National Infrastructure Company would allow the Scottish Government to adopt a “demand-led” model of housebuilding where actual need is considered rather than merely winning points in a political debate. This model of housebuilding could also disrupt the damaging rises in house prices which have locked so many out of living in quality homes and, of course, the government could mandate the highest possible standards for the housing which will force the private market to compete on energy efficiency standards. This would rapidly reduce overall heating demand in Scotland’s energy budget.

Agriculture is the second largest carbon emitting sector of human activity after transport. Scotland could lead the way in integrating environmental footprint into food production and procurement by encouraging more diversity in locally grown food and exploring technologies like indoor hydroponic farming or raised bed farming in urban environments and brownfield sites. This would reduce the transport costs of food – particularly of out of season produce. Procurement is also a major issue. Many farmers who wish to sell food to, say, their local school are unable to because the procurement contracts cover the entire local authority and only the largest suppliers can manage such volumes. France already mandates that 50% of food sold in public buildings must be organic and locally grown. Scotland could adopt and expand on this kind of policy.

As stated above, transport is the single largest producer of greenhouse gas emissions. 25% of Scotland’s energy budget is dedicated to transport and the vast majority of it is driven by fossil fuels. Whilst the electrification of transport is proceeding and could always be supported to accelerate further, Scotland could push to properly nationalise and integrate its public transport network and work to reduce the carbon footprint of the typical commute. This may also involve supporting more active transport – particularly in cities where the roads could be reworked to favour walking and cycling over driving. Integrating transport into economic policy to encourage employers to reduce commuting distances may also be possible by supporting virtual office hubs that allow jobs to move nearer to the people who work there. It’s notable that beyond climate change, this move would improve public health by reducing exposure to pollution and would allow people to use the time otherwise spent commuting to spend more of their life living.

The single worst form of transport in terms of passenger.miles is air transport. The current Scottish Government proposal to half and then scrap the Air Departure Tax would increase significantly the number of flights taken in Scotland but would not increase the number of tourists in Scotland. Our research has shown that a cut in the tax is likely to cause more domestic tourists to choose a cheap, shorthaul flight than would be replaced by inbound tourists choosing to come to Scotland because of the cheaper flights compared to elsewhere in the UK. Overall tourism numbers in Scotland could well reduce as a result of this tax cut. Instead, the Scottish Government should promote alternative methods of coming to Scotland (by train or ferry) and should promote more “staycations” where domestic residents choose to holiday within Scotland.

If we can’t measure something, we can’t monitor or mitigate it. Scotland needs a much more robust system of collecting and analysing statistics than it currently does for many reasons but one of the duties of a Scottish Statistics Agency could be to measure all policies based on their environmental impact and to monitor the implementation of policies to ensure that they meet promised targets and goals.

Climate change is the single greatest threat facing Scotland and the world in the 21st century. We cannot keep ignoring it or pushing mitigation policies beyond the next election horizon. If Scotland and the UK want to be serious about mitigating climate change then it must start acting hard and start acting now. There is much that could happen immediately and politicians have run out of excuses to not get on with the job of preserving our planet. If they don’t, then policies of any description may cease to matter much at all.