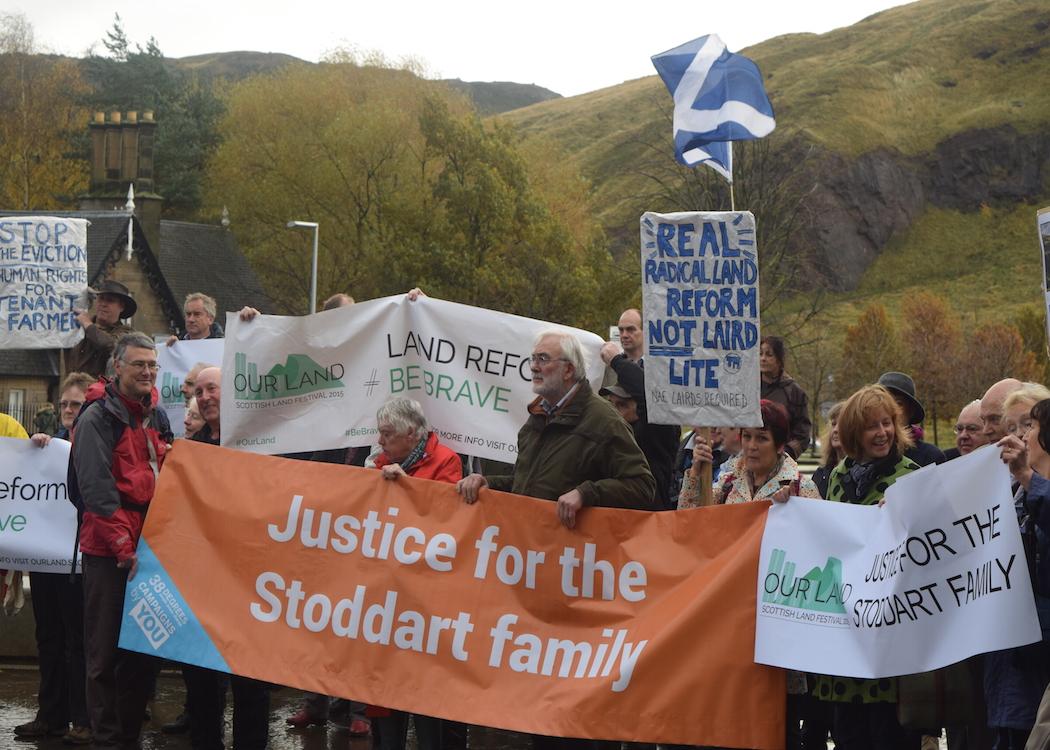 IT WAS a story that briefly grabbed the media’s attention. On 28 November, farmer Andrew Stoddart faced eviction along with his wife and three children. After a flurry of publicity, interviews and a 20,000-strong petition, he was granted a last-minute reprieve – of just two months.

January will see the whole family forced to leave their home; their farm workers, who also have young children, have already gone.

Teaming up with Independence Live , who livestream political events around the country, Commonspace interviewed Stoddart on the eve of a critical committee report last week that set the tone for the upcoming land reform debate, as the much-discussed Bill goes through parliament.

Tenant farming, Stoddart told us, faces a bleak future in Scotland. Since 1982, the proportion of agricultural land let to tenants has dropped by 44 per cent, reaching the lowest level of any other European country. The rights enjoyed by, for instance, French tenant farmers, are not found here.

On top of an unusually concentrated land ownership pattern and weak tenancy rights, he said, the strange mechanisms of EU agricultural subsidies are apparently the nail in the coffin for the sector.

“A massive amount of land has been take back in hand this year because of the change in the subsidy regime,” he said.

“My tenancy is just the latest example of this grab for subsidy. Five years ago, if I’d been put out of the farm, the landlord couldn’t have claimed the subsidy … now the new CAP regime allows for a tenant to be put out the farm and the landlord can claim it the following year.”

In 2011, journalist George Monbiot reported that some of the biggest recipients of the EU’s farming subsidy were the biggest landowners – the Duke of Buccleuch, who owns 240,000 acres, at that time received PS400,000 per year.

This is leading to a trend for landowners to replace tenants with contractors, something Stoddart called “a desperate thing – it’s the death of tenant farming”.

“A tenant like myself will be put out the farm, a contract farmer will be brought in, the landlord will become the farmer and he will then collect the subsidy … I expect our houses, when we leave, will be renovated and let out to commuters on short-assured tenancies. A cottage rent round here now is PS800 per month.”

During the live broadcast, listener Mike Edwards suggested via Twitter that contract farming sounds a lot like zero hours’ employment. Stoddart agreed: “if you look at ‘zero hours’, the worker is living a very insecure life – this is mirrored exactly by the shift to contract farming … The contract can be ended almost at will. It’s very difficult for anyone to be a contract farmer – the bank would never entertain you. So it’s generally only for people who already own a farm – not something a young person can go into.”

The insecurity of Scotland’s tenant farmers is nothing new; Stoddart has researched his farm, Colstoun Mains, and found that in the 100 years prior to 1900 the farm had eight different tenants – “most of whom did not leave voluntarily”.

Stoddart’s own situation is complicated. His landlords – a trust comprised of people he’d never met until recently, despite 22 years on the farm – say it’s all the fault of the Scottish Government’s “defective” legislation over 10 years ago.

Years of expensive court cases and waiting in limbo have culminated in this – notice to quit. In a statement last month, as the petition to stop the eviction was handed in to MSPs, the estate’s factor Sir Francis Ogilvy said : “Colstoun Mains is not ‘Mr Stoddart’s farm’. He rented the farm for fixed period of time in the full knowledge that the lease would terminate”.

The level of compensation offered to Mr Stoddart for the buildings and improvements made on the farm was described by the STFA as “unacceptably low”.

Another listener, Hazel Roger, asked Stoddart what he would do next. Can he start all over again?

“I would hope so. Not quite sure where or how, but we will start again somehow.”

As for the Land Reform Bill, currently going through choppy waters as campaigners decry its weakness and landowners its strength, Stoddart expressed disappointment. “Social justice is a word I hear a lot from the government. And I have to ask: when’s it coming?”

Alongside campaigners in the Our Land group, he has been speaking out about the need for a stronger Bill that will ensure no other farmers find themselves in his position.

The message seemed to have an impact. Stoddart recalled standing on stage in an Aberdeen church, addressing hundreds of SNP members at an unofficial land reform fringe during their October conference. When they heard his story, he said, “their jaws just dropped”.

Previously that day the membership surprised everyone by voting to ‘remit’ the land reform proposals , rejecting them as “not radical enough”. Stoddart’s story was one of the reasons given by Dundee member Nicky Lowden MacCrimmon as he spoke against the motion.

Now, the Bill is set to be debated in Holyrood on 16 December, following a critical report by the Rural Affairs, Climate Change & Environment (RACCE) committee which has been taking evidence for several months.

The committee’s recommendations are stark: re-instate the rules intended to crack down on tax haven ownership, and offer some tenant farmers the right to buy. But the report has already been slammed by the Scottish Conservatives, who said the Bill “becomes really unstuck” in its Agricultural Holdings section and should omit farming issues entirely.

The RACCE report sets the scene for the coming months of debate over this crucial bill. Land campaigner Andy Wightman, now spokesperson for the Scottish Green Party and list candidate for the Lothians, welcomed the report’s findings.

Wightman said: “Scotland needs to have a democratic system of land ownership but we require much bolder legislation if we want to achieve real reform. The range of voices calling for an end to the current unfair system is growing all the time, and today’s committee report adds pressure on the government to listen.”

Whatever comes of the legislation, it will be too late for Stoddart and any others who face similar problems. A spat broke out recently between the Scottish Tenant Farmers’ Association and the landowners’ body Scottish Land & Estates – Lord David Johnstone, chair of SL&E, accused the STFA of “ill-founded accusations” after STFA chair Christopher Nicholson stated that landlords were seizing their last chance to hike up rents before the fairer system came into play.

The accusations ring true with Stoddart, who told Commonspace he knows of “lots of other farmers who are losing their farms as we speak, or who do soon. They’re being subjected to big rent reviews. They won’t speak out because they’re still dependent in some way on their big landlord and they don’t want to fall out with them.”

He insisted that rent controls, the right to buy buildings and some land, and a presumption for tenants to stay in time-limited leases would greatly improve the lot of tenant farmers in Scotland.

“It’s going to be too late for us”, he said, “but if other people can benefit, that’ll be something.”

Asked for comment, the RACCE committee’s convenor Rob Gibson MSP said: “Andrew Stoddart’s case has been complex and harrowing. However, the Land Reform Bill is set to tackle many problems for tenants and has already attracted positive remarks from various commentators.

“The stage one debate on 16 December and stage two will see a very good time to debate these important matters. My committee looks forward to the opportunity to explore ways to make the Bill even more effective.”

Many tenant farmers will be holding their breath as this Land Reform Bill makes its way through parliament in the coming months. But despite the objections of 20,000 people, Colstoun Mains farm will once again be empty by the end of January.