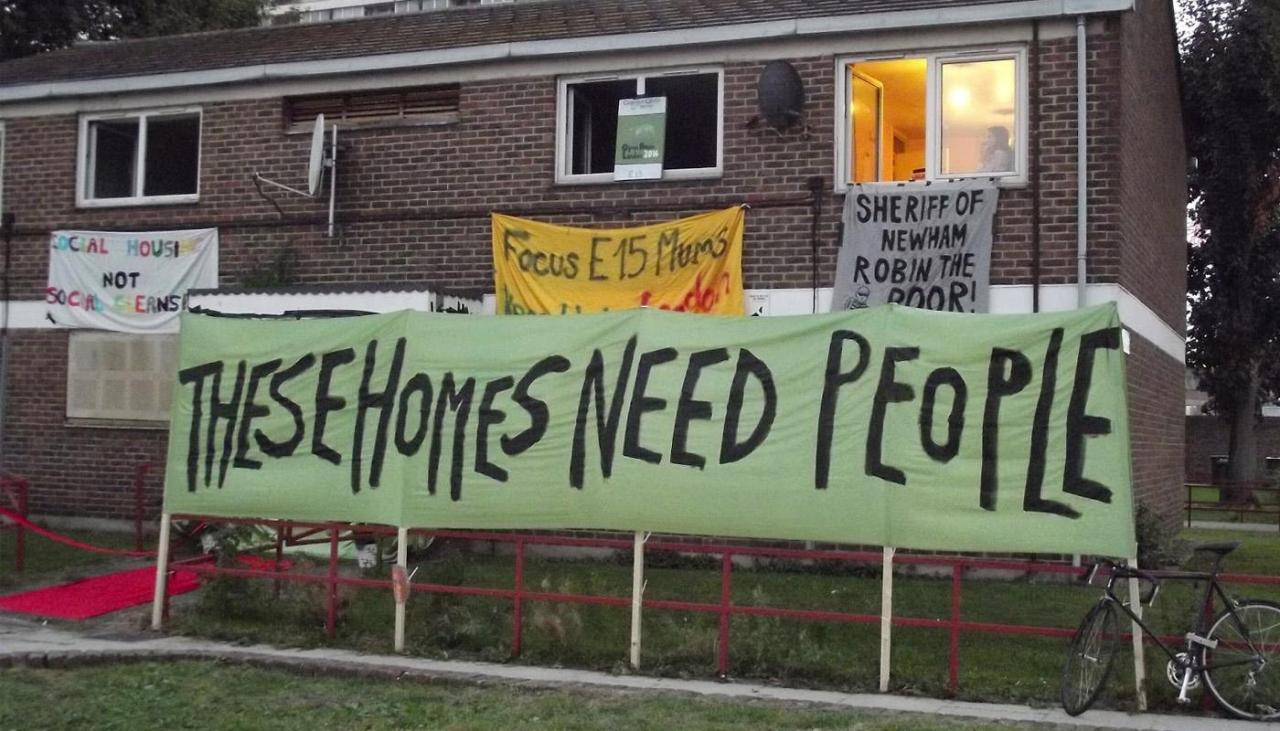 “It’s a national crisis”, says Lindsay Garrett, chair of the New Era Estate residents association. “It’s completely being ignored by the government here in London. They don’t give a shit about us and don’t want the likes of us living here. It’s only the rich professionals they want. But you know what? We ain’t going anywhere.”

The 93 homes in the New Era Estate in Hackney, east London, have been bought over by New York investment company Westbrook Partners who are understood to be planning to evict the tenants, refurbish the estate and re-let the flats at full market value.

The case of New Era is symptomatic of the dangers posed by the private rental market. Indeed, they are symptomatic of a wider housing crisis being felt right across the UK. In cities and towns up and down these islands the message ringing out from tenants is the same: we need more affordable housing. In Scotland this coming Thursday that message will be taken right to Holyrood with the Living Rent Campaign’s rally for rent controls.

Indeed, just as rents continue to escalate at an ever increasing pace, so do the campaigns of communities refusing to be victims of social cleansing. The people of the New Era Estate – with a little bit of support from Russell Brand – have brought their campaign into the national mainstream and recently delivered a 300,000 strong petition to Downing Street demanding government intervention.

A few miles east of New Era is the London borough of Newham. Until recently, located here was the Focus E15 hostel which provided housing for young mothers with support needs. In August this year the mums were issued with eviction notices by the local housing associations and advised to look for private accommodation elsewhere in the country such as Birmingham, Manchester or Hastings. The mums ignored this ‘advice’ and instead they rallied, they marched and they occupied, demanding a right to fair housing. Newham council eventually caved to the pressure and gave them alternative accommodation in the borough.

What is taking place in London is drastic. But the housing crisis is far from just confined to there. In Scotland, a lack of social housing allied to exploitation in the private sector has led to a fall in people’s living standards.

According to Sarah Glynn, academic and author of Where the Other Half Lives: lower income housing in a Neoliberal World, the private renting sector should ultimately be “minimised”.

“There are other things we can do like introduce a land value tax in order to stop houses becoming a thing for speculation” Sarah Glynn, author and academic

“I think the Scottish government should be doing all it can to build more social housing,” says Glynn. “However, we know that without independence there isn’t the funding that there would otherwise have been. But there are other things we can do like introduce a land value tax in order to stop houses becoming a thing for speculation.”

A land value tax is a levy collected by government (local or national) on the value of land and land alone. Advocates for it, such as the Scottish Green Party, say that it would be a progressive tax, paid primarily by the wealthy and would reduce economic inequality. It is claimed that taxing the value of land, as opposed to the value of property, will encourage more housing and a more efficient use of by making it economically beneficial to develop.

While the Scottish government has so far resisted calls to implement the land value tax, it recently launched a consultation into tenancy reform, which could lead to the first major overhaul of legislation in the private rented sector for 25 years.

This comes largely in response to increasing rents and a lack of security for privately-renting tenants.

Over the past four years, monthly rents for two-bedroom properties have increased by 11.1 per cent in Glasgow, 17.2 per cent in Edinburgh and 39.8 per cent in Aberdeen, while wages have stayed much the same.

Indeed, according to data from HomeLet, the average tenant in Edinburgh spends nearly half of their income on rent. In Aberdeenshire, the average monthly rent for a two-bedroom property is PS898, in Lothian it is PS779 and in Greater Glasgow it is PS626.

The housing problems in Scotland have led to the recent launch of the Living Rent Campaign.
The campaign will stage a demonstration at the Scottish parliament on 18 December calling for rent controls and the protection of tenants from eviction, as well as the provision of security and flexibility for tenants.

The campaign’s press officer, Alyson MacDonald, says that her own bad experiences with private landlords motivated her to get involved.

“Pretty much everyone I know has had a horror story with private renting,” she says. “I had my rent doubled over the summer in Edinburgh for the festival so was forced to move out. I then moved to a flat which was an unlicensed HMO (house of multiple occupency). It was in such poor condition that the list of faults was eight pages long and we were forced out to move out again. Things weren’t even that much better at the next place I went.”

MacDonald says that the demand for rent controls is key to the campaign’s aims.

“We are looking specifically at the consultation launched as a springboard into forcing about change,” she adds. “We want to pressure the Scottish government into improving the situation for tenants and will keep campaigning for rent controls until we get it.”

Rent controls are already implemented in several other European countries, including Germany and the Netherlands, where conditions in private accommodation are also perceived to be better.

When questioned on the issue of rent controls, a Scottish government spokesperson said that it is committed to making the private rented sector an “attractive and affordable housing option” for people.

“We do recognise that rising rents can be a problem in some areas which is why we are currently consulting and inviting views on a new tenancy for the private rented sector,” said the spokesperson.

Whatever the eventual proposals for reform are, they will be closely monitored by tenants who seem no longer willing to accept shoddy and expensive living conditions. The issue of housing is uniting people in Scotland, England and beyond. When the Focus E15 mums spoke at the recent Radical Independence Conference in Glasgow, they received a standing ovation from the 3,000 guests assembled.

“The struggle for housing is one which links us all” Saskia O Hara, Focus E15 Campaign

“The struggle for housing is one which links us all,” Saskia O’Hara, one of the Focus E15 campaigners says. “We relate to what is happening in Scotland, inadequate housing and soaring rents, and we encourage direct action and for people to represent themselves.”

In Scotland, that action begins this Thursday with the rally for rent controls at Holyrood. But if the demands aren’t met then it is unlikely to end there.