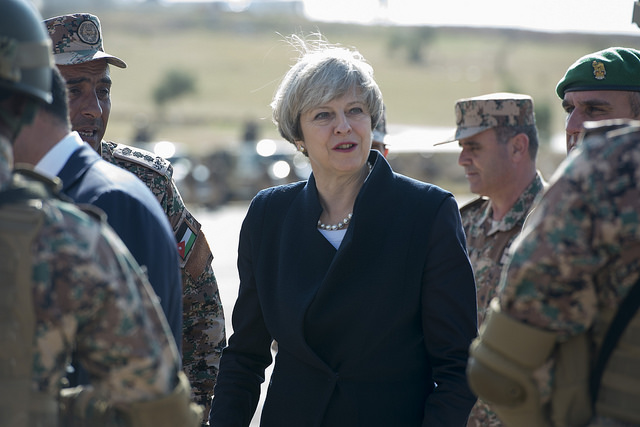 THE June 2017 election has become about whether we want a Westminster system that stereotypes men and women, mistreats its citizens and unleashes the full rightwing excesses of a Tory hard Brexit on us, or whether we want to live in a system that promotes empathy, togetherness, the collective good and collaborative problem solving.

It’s the Common Weal vision versus ‘bitter’ and isolated together – that is the choice that we face at this election.

It was not an accident that Theresa May recently appeared on television with her husband and announced her view that there were ‘boys jobs’, such as putting out the bins), in their marital home. Don’t be fooled by any notion that May is a centrist: the Tory campaign is accentuating a patriarchal rightwing narrative in a tokenistic attempt to appeal to older voters.

The June 2017 election is a fight between hope over fear, empathy over shame and a gender-equity future over a patriarchal past. On gender issues, the divide between May and Nicola Sturgeon couldn’t be clearer. It can be characterised as the difference between the image of May, in the USA, letting President Donald Trump patronise her (by holding her hand and therefore intimate he was more powerful than she), and the image of Sturgeon, in the USA, speaking powerfully at the UN on gender equality.

May expects men to put out the bin and not show emotions – just as Tory MPs have shown no emotion at the way their policies kill people. If you need one reason to reject May’s patriarchal politics, it should be the suicide statistics in the UK.

Tory welfare policies unfairly sanction people for the most pathetic and mean spirited of reasons (if elected, the Tory government will cut welfare to disabled people, families, young people and, through the benefits freeze, by £12bn by 2020). Such polices cause illnesses of despair.

Around 599 extra suicides have been found to be connected with the changes to assessment for work, and around 4,000 people have died after being assessed fit for work. The UN recently reported there had been grave and systematic violations of disabled people’s rights by this Tory government at Westminster (see link here).

Death by suicide involves a complex web of economic, social, biological and emotional causes. Poverty is a major cause, particularly when connected with ‘man up’ patriarchy. Patriarchy works insidiously, for example, by sending messages that connect masculinity with physical/emotional strength, economic ‘bread winners’, male ‘stiff-upper-lips’ and the avoidance of open discussion.

May expects men to put out the bin and not show emotions – just as Tory MPs have shown no emotion at the way their policies kill people.

Stoicism is sold as a virtue, yet the suffocating ‘strong and stable’ stiff upper lip attitude of May’s politics is dangerous to the health of all individuals.

Patriarchy sets men an impossible role model to live up to, suicide is the leading killer of adults between the ages of 35 and 49 and accounts for around one in five deaths in England and Wales (see Guardian article here, Samaritan’s report here).

What is it about Westminster and voters in England that they cannot wake up to this national failure?

How can voters re-elect a party which not only presides over these figures, but adds to them through its welfare policies?

Stoicism is sold as a virtue, yet the suffocating ‘strong and stable’ stiff upper lip attitude of May’s politics is dangerous to the health of all individuals.

Such figures suggest that the ‘man up’ position is a life-threatening concept as it induces shame in the people who do not live up to male stereotypes.

Shame is a key tool of unionist politicians and shame has always been employed as a weapon of the powerful to keep everyday people in line, to put a break on collective action and to prevent societal change.

Poverty and shame are inextricably linked: the higher your socio-economic status, the less likely you are to feel shame and show empathy for others.

Presently, Scottish Conservatives leader Ruth Davidson’s only political strategy is to throw mud at the SNP in an attempt to create shame around Sturgeon, and May does the same with Jeremy Corbyn.

Ironically, it is Tory politics that knows no shame. They point fingers at everyone else, in the hope no one notices their inadequacies. Yet, it is they who crashed the recovery (resulting in UK Government debt increasing by over £1729.5bn during their time in office), it is their economic mismanagement that has reduced the Scottish Government budget (by 12 per cent), it is they who lacked a plan over Brexit (putting up prices in the supermarket when the pound crashed) and it is they who now refuse to guarantee the pensioners’ triple lock (that increases the state pension by price inflation, wage inflation or 2.5 per cent).

Patriarchy sets men an impossible role model to live up to, suicide is the leading killer of adults between the ages of 35 and 49 and accounts for around one in five deaths in England and Wales.

The Tories continually utilise shame as a shield in a way that lacks empathy, honesty and self-reflection. This inability makes them unfit for office.

As Sturgeon said during the ITV debate – the Tories attack all welfare recipients as “scroungers”, but the majority of recipients are in low-paid work and on zero-hours contracts enabled by the Westminster system.

Just imagine, post-June 2017, unfettered Tory austerity economics further attacking Scotland, continuing to harass disabled people and fuelling in-work poverty. We can aspire to a different way of being, to live in a system that saves working class lives, rather than damages people in search of profit.

Empathy is what the 2017 election is about. We, as a society, have the opportunity to reject Tory blame-and-shame politics, reject Tory foodbank society and reject a model that creates the cultural, economic, emotional and social conditions that fuel illnesses of despair.

Shame is a key tool of unionist politicians and shame has always been employed as a weapon of the powerful to keep everyday people in line, to put a break on collective action and to prevent societal change.

Sturgeon argues that Scottish politics involves connectedness and empathy to your fellow voter (see here). Traditionally, over 70 per cent of Scots vote for parties other than the Conservative party.

If England wants Scotland to remain part of the union, it needs to show empathy and reject Tory ‘man up’ politics.

For critical analysis by Christina and John of the Scottish policy context that has reduced male suicides by 20 per cent, see this longer blog post here.