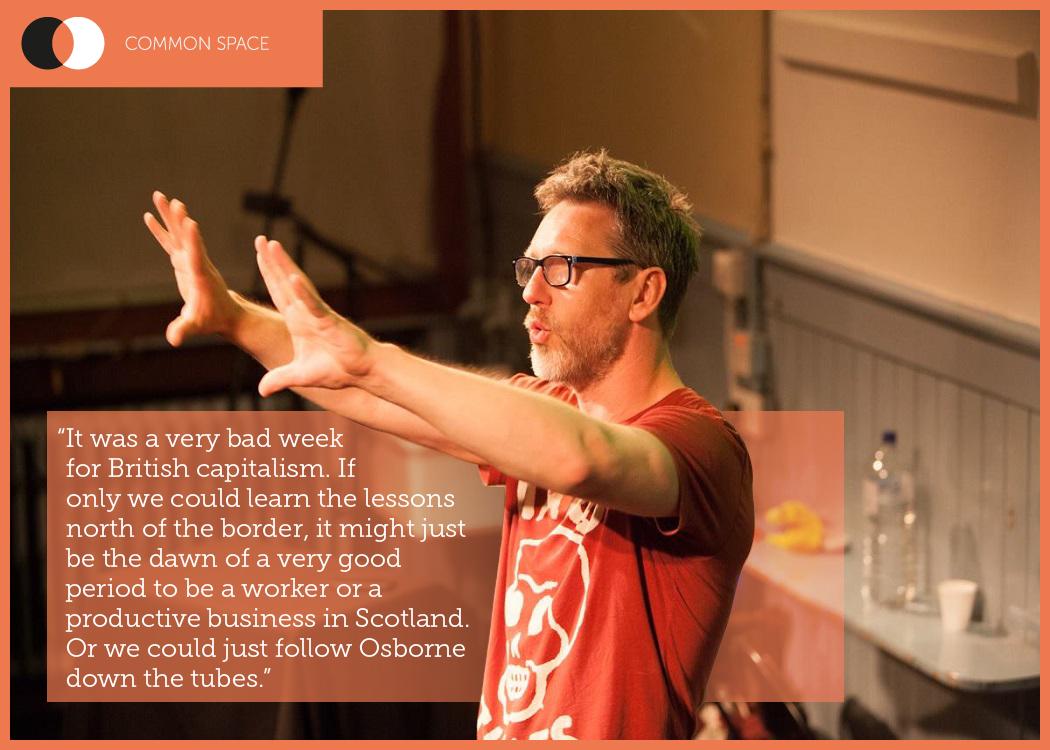 Common Weal director Robin McAlpine argues that as the crisis in British capitalism grows, it’s time for Scotland to reject economic orthodoxy, and invest in a productive economy.

Well, that was another bad week for British capitalism. It turns out that not caring who owns your economy, not caring what the industrial environment is like and not caring about money laundering may not be genius solution to perpetual prosperity after all.

Britain has prided itself in being an ‘open’ economy, a true believer in market fantasy. Whenever the UK has had the opportunity to intervene to shape the economy in the interests of its general population, it has refused. It fundamentally disagrees with the idea you should try.

It’s certainly a brave position. Almost every other country in Europe interprets EU procurement directives (for example) in a way that still allows them to use pubic buying power to support and grow the indigenous production sector.

Not Britain. In Britain we have interpreted the same directives in a manner most conducive to overseas multinational corporations, sacrificing British businesses at the alter of free market ideology.

Tax cuts for profitable businesses and giving away ownership of our economy are no ways to achieve the ‘inclusive growth’ the Scottish Government wants to pursue.

Likewise with tax. Most European countries consider seeking to get a fair amount of tax from the corporations which profit from the pockets of their citizens to be a collective good idea. Not Britain. Here we virtually fetishise how clever the corporations are in tricking us out of our fair share.

In fact, you would almost think that British governments (Blair was as bad) were so in love with the financial sector which profits from overseas buy-up of British infrastructure and from complex tax avoidance that it is very willing indeed to sacrifice almost all of the rest of the economy on their behalf.

But enough about how ropey the British economy is – you can read about it to your heart’s content if you take any interest in real economics. The question is, are we stuck with this failing approach in Scotland?

It shows that we can do more. But it does also raise the question about why we only seem to do more in the face of crisis. If intervention works, what is it that compels us not to do it until we really, really need to?

Because it is an enduring shame that Scotland (of its own free will) has stuck rigidly to the same corporation-friendly interpretation of procurement laws as the UK Treasury. Despite a substantial campaign from a few years ago, virtually nothing has been done to reform Scottish procurement laws to give Scottish firms a fair chance of selling to their own schools, hospitals and local authorities.

At Common Weal we talk quite a bit to Scottish manufacturers and producers and one of the predominant messages we get every time is that one of the biggest problems they face is getting access to Scottish markets.

Most European countries consider seeking to get a fair amount of tax from the corporations which profit from the pockets of their citizens to be a collective good idea. Not Britain.

Producers can make great stuff in Scotland, but consumers can’t buy great quality Scottish stuff. And yet for reasons I’ve never fully understood (though I have my concerns), public procurement policymakers resist any moves to help them. Apparently the interests of Serco come first.

Another big British problem is investment – a country where the net rates of investment are currently effectively zero . Britain is not investing to grow.

But as a report we recently published (along with Friends of the Earth Scotland and the New Economics Foundation) shows, we could create a Scottish National Investment Bank within the powers of the current Scottish Parliament and fairly easily capitalise that bank to be able to lend PS10bn (at least) into the Scottish economy.

That would allow Scottish-owned firms to grow and secure themselves in this country, anchoring jobs here and preventing profits from being exported to multinationals. But while successive governments have talked about this, all we have are a couple of piecemeal and ineffective funds here and there.

Meanwhile, this week we learned that the Scottish Government is exploring an investment deal with China. Let me be clear, if Chinese firms (or companies from anywhere else in the world for that matter) really want to invest in Scotland, that is to be welcomed. But a real investment would involve that company putting its money towards a new and growing industry based on Scottish skills and knowledge – and taking risks on its investment.

Being given risk-free control over crucial aspects of the economy is something else altogether. We’ve repeatedly given corporations ridiculously generous access to our renewable energy capacity and they’ve made a lot of money out of it (the profits are virtually guaranteed). The same is doubly true of housing. And now we may be about to hand over yet another generation of our own national wealth, this time to the Chinese.

The Scottish Government should follow a simple rule – if we can finance and own something from within Scotland we should not be seeking overseas investment. Both renewables and housing can very easily be financed and owned for our benefit, not for China’s. There’s very little risk.

It is difficult to get people to understand how damaging mass overseas ownership is to an economy because in Britain we’ve been celebrating it for so long. If you want to know why the GERS figures don’t look good for Scotland, just be clear that very large chunks of the nation’s wealth are taken out of the nation’s economy and given over to the corporation-owning global elite.

It’s our indigenous industries and businesses that pay the price and our tax revenues that suffer. But still we plough on. If it ever feels like Scotland’s citizens fail to benefit from our amazing renewable energy potential, the way we give its ownership away explains it.

Scotland’s approach to its economy is a bit like the Scottish Futures Trust, the public company designed to replace PFI in Scotland. It is certainly better – but it’s only a very little bit better, and nothing like as good as it should be.

Whenever the UK has had the opportunity to intervene to shape the economy in the interests of its general population, it has refused.

So Britain’s economy is failing and it’s a result of poor public management of the economy. But we’re hardly in a position to crow because Scotland is still following a Britain-lite approach to economic management.

It shouldn’t have been like this. In 2007 when the SNP took power it was saying all of the right things – a proper industrial strategy to build up manufacturing, a national infrastructure company to build and own infrastructure on behalf of the Scottish public.

But gradually, as the dirty fingerprints of consultants and financiers and corporate lawyers smeared themselves all over those plans, the vision was stripped out and replaced with sorry compromises passing themselves off as a new era.

Now the headlines are about selling off our future economy to Chinese corporations for easy short-term money and cutting Air Passenger Duty which is mainly paid by big business which takes a majority of the flights. There is nothing at all in that which would make George Osborne uncomfortable if he was asked to do the same.

The SNP was right in 2007 – It just didn’t follow through. Unless we discuss big and important issues that are not being discussed – market access for Scottish producers, public investment strategies, a proper industrial strategy, a housebuilding programme designed in the interests of the public and not the developers – we will continue to be a slightly less woeful version of declining British economic management.

Common Weal is suggesting four big, core economic policies that can turn this around. First, create an industrial strategy based on neither free markets nor central planning but on creating mutual sector associations which enable industry sectors to devise their own economic strategies .

Fourth, pick a couple of big, national investment projects which are income generating or where money is already committed and design them as major economic tools, not to benefit big business but to create rapid, high-quality jobs. We’re suggesting childcare and housing (we’ll publish a major paper on housing in the summer).

If it ever feels like Scotland’s citizens fail to benefit from our amazing renewable energy potential, the way we give its ownership away explains it.

We have been far too timid in Scotland, far too nervous about straying away from the British orthodoxy in managing the economy. Tax cuts for profitable businesses and giving away ownership of our economy are no ways to achieve the ‘inclusive growth’ the Scottish Government wants to pursue.

So it was a very bad week for British capitalism. If only we could learn the lessons north of the border, it might just be the dawn of a very good period to be a worker or a productive business in Scotland.

Or we could just follow Osborne down the tubes. It really is our choice.