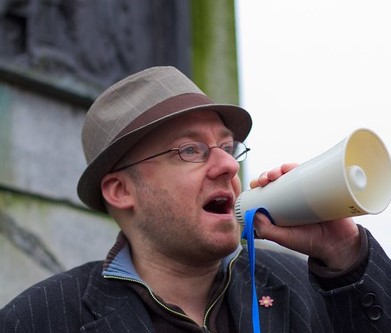 The Scottish Green co-leader discussed the future of the party, the economics underpinning the climate emergency, and the responsibility of detailing how independence can change Scotland

SCOTTISH GREEN co-leader Patrick Harvie MSP today [24 August] argued that the Scottish independence movement has a responsibility to be inclusive to its diverse ideological strands, while simultaneously setting out in detail how self-determination could change the face of Scotland.

Speaking at the Edinburgh Fringe in a public discussion with the award-winning Scottish sportswriter Graham Spiers, Harvie – freshly returned from campaigning in Shetland ahead of the upcoming by-election – elaborating on his views over the timing of a potential second independence referendum, said: “There has been talk of late 2020 – I think it that can be achieved, that would be good.

“The trouble is the current political climate and particularly what’s happened with Brexit – not just Brexit itself, but the contempt that has been shown by the UK Government for Scotland.”

Asked by CommonSpace if he felt a second referendum would see a recreation of the multi-party Yes campaign which saw the Greens come together with the SNP and the Scottish Socialist Party, Harvie responded: “I think probably both sides would learn the lessons of what did and didn’t work. Both the Yes Scotland and the Better Together campaigns had their problems internally.

“The Yes Scotland campaign, for example, was started by the SNP before they had done any throwing open doors, building trust between political parties… They started that, they set it up, they appointed the board, and they set it on its track. We eventually decided to take part in that and get them to agree to a broader governance structure, but it wasn’t perfect.”

Harvie continued: “The case for independence needs to be inclusive; it needs to be pluralistic. But that can’t be simply saying: ‘Independence is about everything you might want it to be’. Even though I support independence, I would not have been willing to take part in that campaign if all it had was some vacuous slogan like ‘Take back control’, as if it means everything and nothing. I think it’s a fundamentally dishonest kind of campaigning.

“Political parties have a responsibility to set out in detail what it is they’re trying to achieve, and what for, and what difference it would make. I think a successful pro-independence campaign needs to be inclusive of those different strands, without trying to say they’re all the same thing, because they’re not.

“There are those who have a view of independence as an economically right-leaning, small government, low-tax, low-public services sort of Scotland – I would vote against that. If I thought that was going to happen. But there are a great many people who see independence as about opening up the possibilities of a better, fairer, more inclusive Scotland.”

Elsewhere in the conversation, Harvie addressed the ongoing crisis in Brazil, where fires continue to burn across the Amazon rainforest and diplomatic tensions rise between the international community and far-right Brazilian President Jair Bolsonaro.

Responding to Spiers’ contention that the kind of environmental reforms sought by the Scottish Greens would require “an utter economic revolution”, Harvie says: “It precisely means that.

“I’ve been experiencing this on the doorstep – people talking about climate in a sense of helplessness, and looking at the Amazon burning, and feeling powerless: what can we do?

“This is not some technical issue… This is about power and economic relationships. Economic elites – those who have been served very, very well by the hoarded wealth that the rest of us have generated – are unwilling to share. They were unwilling in Brazil to see a modicum of social democracy; they were more willing to help Bolsonaro into power and see a genuinely scary far-right power bloc coming together.

“And that is why what happened has happened: Bolsonaro has been perfectly clear all along that he saw the Amazon as an economic asset to be exploited, that big business should have priority over climate – which he denies the science of – and over indigenous people’s rights, which he has no respect for.

“So this is about power, this is about economics, this is about whether we see a natural asset as part of the healthy body of the living world we depend on, or whether we see it as an economic asset to be extracted – in Scotland as well. If we think of oil and gas, of every drop we can get out of the North Sea, is of economic value, we will be contributing to our generation’s continued failure to provide not just a better but a liveable world for the next generation.”

In a further comment on international political matters, Harvie was asked by Spiers if he would agree that US President Donald Trump was an “utter tit”. Harvie replied that such a characterisation would be an “insult to anatomy”.

“This is about whether we see a natural asset as part of the healthy body of the living world we depend on, or whether we see it as an economic asset to be extracted – in Scotland as well.” Scottish Green co-leader Patrick Harvie MSP

Turning to climate issues closer to home, Harvie expressed his dissatisfaction with the new Climate Change Bill introduced to the Scottish Parliament in May 2018, which seeks to raise the ambition of Scotland’s domestic emissions reduction targets in line with the UN Paris Agreement.

Harvie commented: “I have to admit, I am feeling scunnered with the whole idea of targets. I chaired the climate change committee at Holyrood [that oversaw] the first Climate Change Act a decade ago. And it was okay – we all thought it was good, we all patted each other on the back for our consensus on these ‘world-leading’ targets. But if you look at the trajectory of Scotland’s emissions cuts, you cannot see that bill make a difference. That piece of legislation did not accelerate our emissions cuts; we continued down the path we had been on.

“Targets in themselves are all very well as a political signal of where you want to get to, but they don’t say how you’re going to get there. They don’t talk about binding governments to actions that are going to make a difference. The new climate change bill that’s going through…I struggle to see what value it has if it can’t be amended to put in real substance. All it does is tweak targets, which can be done under existing legislation. There’s very little substance.”