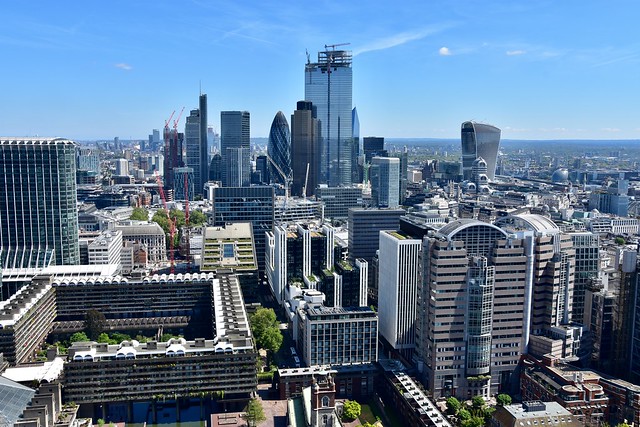 TWO experts on UK finance have used the example of a Scottish PFI project to illustrate how the financial sector, concentrated in the City of London, extracts wealth from other regions of the UK, contrary to popular wisdom.

The analysis came in a submission to a House of Commons inquiry into regional inequality, which is the most severe of any country in western Europe.

London and the South East have a significantly higher GDP than other regions of the UK and contribute significantly more in tax, leading many politicians and commentators to argue that the rest of the UK benefits from the redistribution of the City of London’s wealth creation.

Labour’s Glasgow North-East MP Paul Sweeney, for instance, argued on Novara Media in May, when criticising the economics of Scottish independence, that: “London essentially generates the wealth, and it is re-distributed to other regions of the UK”.

Chris Giles of the FT wrote in 2017 that “if London was a nation state, it would have a budget surplus of 7 per cent of gross domestic product, better than Norway. . . . the idea that London sucks the life out of other parts of Britain is absurd.”

In their submission, Nicholas Shaxson, author of 2018 book The Finance Curse, and John Christensen, Director of the Tax Justice Network, challenged this view, arguing that “the very obvious one-way flow of wealth as evidenced by London’s tax and budgetary and jobs contribution, is only the most visible part of a more complex, less visible, two-way flow, with powerful and troubling regional implications”.

To demonstrate the argument, Shaxson and Christensen look at the case of the Police Scotland college at Jackton in South Lanarkshire as “a particular wealth extraction technique”.

The 2002 Private Finance Initiative (PFI) project has a capital value of £17 million, but it’s cost to government has been “£111 million over the 26 year financial life of the project”. The cost would have been £35-50 million if it was funded from government borrowing rather than PFI.

Shaxson and Christensen mapped out the “financial superstructure” built on top of the Police Scotland college (formerly a training centre) in the following flow chart. 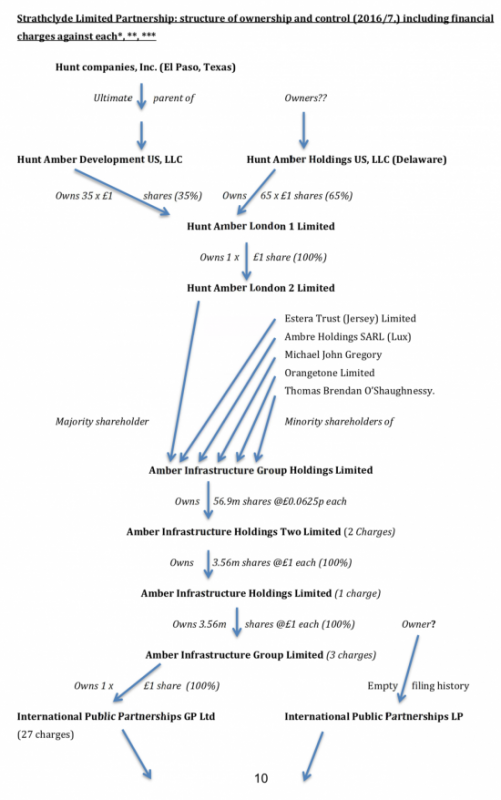 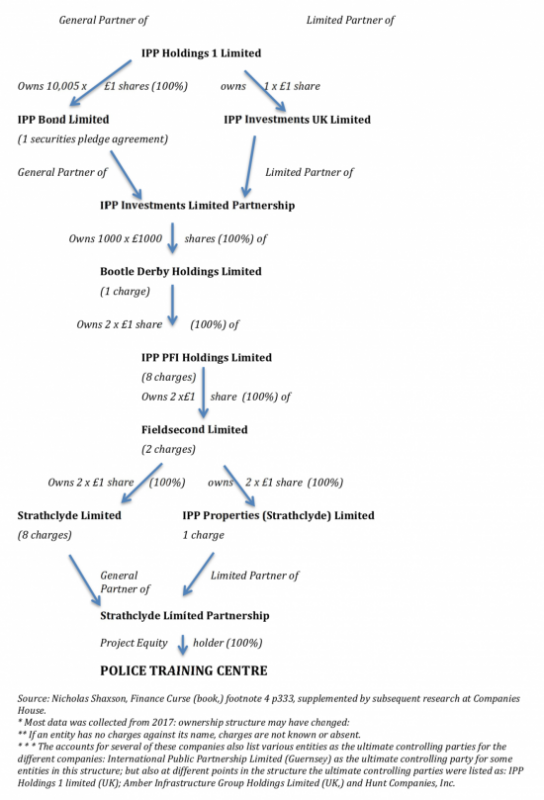 “Nothing remotely illegal is being alleged here,” Shaxson and Christensen state. “Yet it raises an important question: what is the purpose of this astonishingly complex corporate tower sitting atop a police training centre in Scotland?

“The shortest answer is that this is a classic example of the financialisation of apparently mundane parts of Britain’s economy…this is not an outlier: it is increasingly the way business is done.

“Overall, the general purpose of such complexity is for the owners higher up in the corporate tower to obtain maximum possible rewards from a particular arrangement, while shifting maximum risks onto others’ shoulders.”

Explaining the regional imbalances involved in the PFI training centre example specifically, Shaxson and Christensen write: “All of these named entities apart from the entities in El Paso, Texas, and the police training centre itself, are based at 3 More London Riverside, by Tower Bridge in London). What is more, the accounting firms and the banks for all the different accounts and charges examined (there were far too many to investigate), were also all registered in or near central London, or in the United States, Canada, or in various tax havens.”

The authors conclude that  the “financial superstructure extracts wealth from Britain’s regions, such as East Kilbride and Scottish police budgets in this case, and delivers it to central London, its hinterlands, overseas and offshore.

“This is not an aberration of British capitalism: these complex corporate structures reflect techniques and arrangements that increasingly lie at the heart of the British economy, each with the same rough implications for regional imbalances.”

PFI has not been used by for new building projects by the Scottish Government and Scottish local authorities since the SNP came to power in 2007, though the Hub and NPD models which replaced it still rely on private finance to pay the upfront costs for new schools, hospitals and roads.

Commenting on Shaxson and Christenson’s findings, tax expert Professor Richard Murphy, stated on his blog: “Imagine just how much more efficient our economy could be if a police training centre did not have to bear the burden of all that financial admin, the burden of which all does fall onto the state?

“I know PFI is ceasing to be used. But the message is clear: these structures have got to go. I have long argued that Quantitative Easing could be used to fund this at fair value, and stand by that argument now.”

In May, a study by the UK2070 Commission found that regional inequalities were likely to continue to grow further unless much more serious policy action was taken to address it.

Lord Kerslake, former head of the civil and chair of the Commission, compared efforts to address regional inequality to “peashooters or sticking plaster — too small, shortlived or disjointed to have a lasting impact”

On Wednesday [21 August], the Government and Expenditure Revenue Scotland 2019/20 analysis of Scotland’s fiscal position in relation to the UK as a whole will be published. The findings of GERS, which assess Scotland’s fiscal position within the current constitutional settlement, have precipitated fierce debate over whether Scottish independence is financially viable.