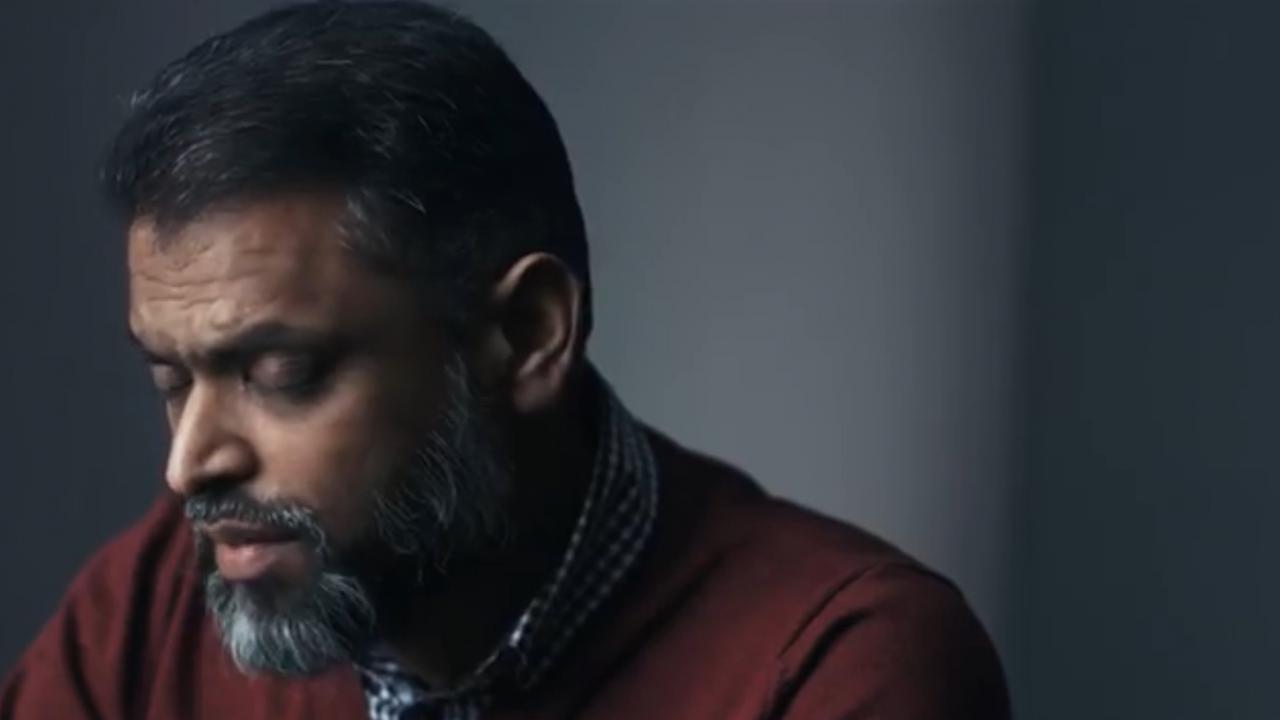 CommonSpace went to the premier of 'The Confession: Living the War on Terror' at the Glasgow Film Theatre, a film charting the experiences of the human rights activist, education campaigner, scholar and Guantanamo detainee Moazzam Begg

A MAN on his knees, caked in freezing mud is dragged off a military aircraft with his hands and legs cuffed behind his back. He is thrust upon the ground as two soldiers dig their knees and feet into his back and head, pushing him deeper into the ground as they tear away his clothes with a knife.

Naked, they push him into a line of other captives still shackled, spat upon and shouted at while dogs bark incessantly in the dark. Delouser is thrown upon his head and body while the light from several stadium type spotlights shine down on his shivering body. Photographs are taken, then everything goes black.

This account by Moazzam Begg of his initial ordeal, led to him finding himself a prisoner of the US military, considered an enemy combatant and held without trial or evidence for three years between 2002 and 2005. After initially being arrested in Pakistan, Begg was imprisoned in Kandahar and Bagram jails in Afghanistan and then transported by plane to the US army base in Guantanamo, Cuba.

"So I was on my knees – again – and the hood that covered my head was ripped off. And I realised that I recognised a face. Andrew, it was Andrew, the same one who had come into my house in Birmingham, who had spoken to me and my wife and the children." Moazzam Begg

The Confession is a documentary film that tells his story from his youth and family to his political awakening and the fateful years he spent as a captive and terrorist suspect.

While he was never charged with a crime or put on trial, interrogators accused Begg of running Muslim training camps for fighters who had attacked American forces. After the intervention of the UK prisoner-rights legal group Reprieve, Begg was finally released in 2005, after three years in American detention.

Even as he was released he was hooded and shackled for the plane ride back to the UK, a chilling reversal of the trip made from Afghanistan to Guantanamo.

"How can we pretend to care about democracy, about rights or justice, when there are people who have been released out of illegal custody and have never seen their children." Moazzam Begg

The film about these events was made in the style of an extended Panorama programme, with the spine of the production being the long interviews between director Ashish Ghadiali and Begg where he recounts his early life and his experiences travelling and being detained.

Director Ghadiali spoke about the process of filming where, he said: "It looks like a sit down meeting and it is in a way, very simple. I wanted us to catch a certain feeling in the film. I felt that you would get a better quality film, dynamic between the interviewer and Moazzam, between two people who still don't know each other that well.

"But also not many people know we spent, what, two days filming the sit down interview scenes."

Three themes emerge from the film: the question of identity, the power of the state as an actor in violence and government accountability.

Moazzam Begg had travelled to Chechnya for what he states was purely charity work and trying to help the families of Muslim fighters during the conflict with the Russian army at the time. He often went through Turkey and specifically Istanbul as a transit point for meeting friends and gathering supplies like clothes, food and medicines. This had been the kind of activity Begg had undertaken since the seminal life-changing experience of his life during the conflict in Bosnia where he witnessed thousands of Muslims massacred.

"And I remember thinking to myself, well I know and don't need you to tell me this. I am British. But I found it interesting that they felt the need to tell me." Moazzam Begg

After travelling back and forth he was detained and initially questioned by two security service personal, one of whom told him that if he knew anything that he could help them. As Moazzam Begg recalled: "I remember one of them saying the most curious thing to me. She said, 'you know this is your country too, you’re British'.

"And I remember thinking to myself, well I know and don't need you to tell me this. I am British. But I found it interesting that they felt the need to tell me." It is a constant theme running through the film, the idea of having your identity and agenda set by the government which has impunity over you, your actions and motivations.

The main idea is that of government power and accountability, especially when the security services are used as the ultimate tool of coercion, war and information gathering. The viewer is told of the random visits to Begg's house before his detention in Pakistan and even after he was freed in 2005, and where as a result of travelling to Turkey and Syria he was held in Belmarsh Prison in south London on charges later dropped, which included aiding Syrian rebels and terrorists networks.

"I remember one of them saying the most curious thing to me. She said, 'you know this is your country too, you’re British'." Moazzam Begg

"How can we pretend to care about democracy, about rights or justice, when there are people who have been released out of illegal custody and have never seen their children."

There is additionally a trace a dark humour underlined by the threat of violence at every turn. On one occasion at Guantanamo Base, Begg was interrogated by, he claims, an MI5 officer who he knew only as Andrew.

Andrew had been invited into his house years earlier to question Begg on people he knew and more on his own political views. It was at this point that he understood the power of the state, which he says had "declared war on me without me even knowing it".

"If we think about the leadership of Isis, al-Baghdadi and 13 others, they all came from the US prison called Camp Bucca. This is where they learnt terror and the ignoble talents of cruelty," Moazzam Begg

Begg's statements are at odds with the signed confession he allegedly gave to FBI agents while held in Afghanistan after his capture in February 2002, a copy of which was obtained by The Daily Telegraph.

In the statement, which US officials insisted was not obtained with torture, they said Begg admitted to having attended three separate Al Qaeda terrorist training camps in Afghanistan where he learnt to fire AK-47 rifles, rocket-propelled grenades and use primitive explosive devices.

In the statement, they also claim he admitted that, when living in the UK, he acted as a "communications link" between radical Muslims in the UK and others living abroad.

The UK has since 2005 repeatedly denied the enacting of any torture by UK security forces and been reserved in confirming or denying wether MI5 or MI6 operatives were regularly at Guantanamo with the UK detainees during interrogation.

Begg went on: "So I was on my knees – again – and the hood that covered my head was ripped off. And I realised that I recognised a face. Andrew, it was Andrew, the same one who had come into my house in Birmingham who had spoken to me and my wife and the children.

"It was then that I did feel truly scared and understood the reach, the power of these people. After the other interrogators had gone away he sat down opposite me and placed a Mars bar on the table. Which is funny now, because I hate Mars."

Such tales are also used to express the nuance that Begg was able to hold on to via his interactions with some of the soldiers who guarded him in Guantanamo, like a US soldier who was excited to give him a Cadbury’s cream egg. Begg said: "I didn't have the heart to tell her that I didn't like them, but I ate it all the same and made sure I gave her back the wrapping paper because, well, that's contraband. There are soldiers even in my time there who got severely punished for 'fraternising with the enemy'."

Life for inmates in Kandahar was brutal, they were not allowed to exercise, shared one bucket as a toilet between 10 of them and ate one half of an army ration per day for a meal. Throughout this whole time, Begg was not permitted to contact his family or given access to a legal representation. The occasional letters which arrived from his family, including those from his six-year-old daughter, were often completely blacked out by censors.

After several months in Kandahar, Begg was transported to Bagram and finally Guantanamo Bay. For two years, Begg lived in eight-by-six-foot solitary confinement in Camp Echo and, nearing the end of his time in Guantanamo, he was moved to the infamous Papa Block, which consisted of wire mesh cells resembling dog kennels. All this treatment in Begg’s mind crystallised the idea that the war on terror and manner of its conduct had created as many monsters as it tried to destroy.

"Look at Isis, where did it come from? From the smashing of Iraqi society and the birth of Al Qaeda. If we think about the leadership of Isis, al-Baghdadi and 13 others, they all came from the US prison called Camp Bucca. This is where they learnt terror and the ignoble talents of cruelty," he said.

Begg recalled watching footage of Isis and being sent back in his mind to Guantanamo. He said: “I looked and thought, why? I saw a video where some fighters had hostages dressed up in orange jumpsuits, like the ones we wore in Guantanamo and those that the leaders of Isis would have worn in Camp Bucca. Why would they put orange jumpsuits on their hostages? For solidarity’s sake? Of course not. I thought, they are returning what they have been taught. It is no coincidence."

In the question and answer session that followed the screening of the film, Begg touched on how the topics in the film connected with actions and law in Scotland. The event was chaired by Richard Haley, chair of Scotland Against Criminalising Communities (SACC), which was set up in March 2003 in response to fears that minority communities in Scotland were being victimised to create a climate of fear.

"Look at Isis, where did it come from? From the smashing of Iraqi society and the birth of Al Qaeda. If we think about the the leadership of Isis, al-Baghdadi and 13 others, they all came from the US prison called Camp Bucca. This is where they learnt terror and the ignoble talents of cruelty." Moazzam Begg

They have, along with Begg, been putting together a handbook to help teachers, lecturers and other professionals tackle the UK Government's Prevent strategy.

Prevent is described by the government as a strategy to stop people turning to terrorism, but campaigners call it a "manipulative, Islamophobic, anti-democratic programme that divides Muslims from the rest of the community, normalises war and suppresses attempts to hold the government responsible for its foreign policy".

According to the group, it is being stepped up in Scotland, partly because the Counter Terrorism and Security Act 2015 creates a new "duty" on public bodies across the UK to implement the strategy. Teachers, doctors, social workers and university lecturers in Sotland, are being trained to watch out for people whose political views or day-to-day behaviour hints that they may be at risk of "radicalisation".

The Confession will be released nationwide on Friday 12 August.