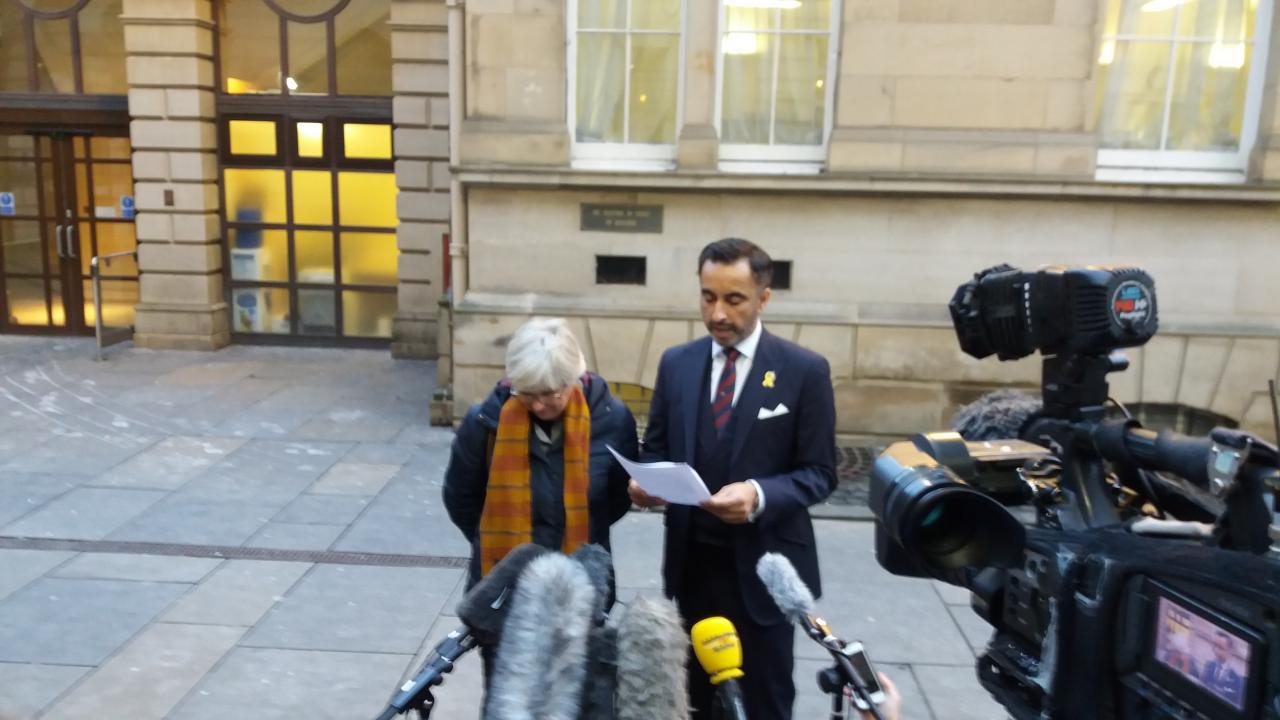 –          After being released on bail, Clara Ponsati will next appear in court on 12 December

–          A full hearing for the former Catalan minister is likely to take place in Spring, 2020, according to her lawyer Aamer Anwar

FOLLOWING her bail from Edinburgh Sheriff Court after handing herself into police, exiled former Catalan minister has placed her fate “in the hands of the Scottish judicial system”.

Ponsati, who arrived at St Leonard’s Police Station in Edinburgh this afternoon [14 November] in response to a European Arrest Warrant issued by Spain over her involvement in the 2017 Catalan independence referendum, subsequently appeared in court, was granted bail and allowed to retain her passport.

Ponsati, the former education minister for the Catalan Government and a professor at St Andrews University, is scheduled to next appear in court on 12 December, with a full hearing likely to take placed in Spring, 2020.

Ponsati was released without travel restrictions, as she is not considered a flight risk.

Addressing press and supporters, who had gathered outside the court in solidarity, her lawyer Aamer Anwar said that the crime of sedition with which Ponsati is charged by Spanish authorities was abolished in Scotland “many years ago.”

In a statement on behalf of his client, Anwar reiterated prior criticisms of the warrant issued by Spain, describing it as “full of contradictions and mistakes,” and arguing that “whilst it accuses Clara of everything, in reality the warrant provides no real examples of any alleged crime.”

Anwar said: “This warrant comes as no surprise, because when the Supreme Court sentenced 9 Catalan leaders to 100 years between them it wrongly accused Employment minister Dolors Bassa of the decisions taken by Clara in her role as Education Minister.

“Clara submits that she should not be extradited for a ‘show trial’ in the Supreme Court, where she believes the only verdict would be one of guilt.

“Clara views these charges as a ‘politically motivated prosecution’.”

Anwar stated that Ponsati’s legal team would submit that her human rights could not be guaranteed by the Spanish courts, saying: “The warrant signed by Judge Pablo Llarena of the Spanish Supreme Court charges Clara Ponsati with the crime of sedition.

“Sedition is the archaic offence invented in the 16th century Courts of Europe, by Kings and Queens who feared a backlash from people demanding their freedom.” Clara Ponsati lawyer Aamer Anwar

“Sedition is the archaic offence invented in the 16th century Courts of Europe, by kings and queens who feared a backlash from people demanding their freedom.

“Sadly for Spain, in Scotland like most democracies, the crime of sedition no longer exists.

Anwar added: “Clara trusts that her fate now lies in the hands of the Scottish justice system which she believes to be impartial, robust and independent.”

Referring to recent statements by Pedro Sanchez, Anwar continued: “President Sanchez recently exposed himself to accusations of interference in the extradition process whilst the leader of the far-right Vox party believes Scotland should face consequences if Clara is not extradited.

“Our legal system will not be swayed by such interference or threats and will come to a decision based on the law.

“Clara believes that the Catalan people are changing the course of their history and that each act of repression by Spain brings the day that Catalonia is free closer.”