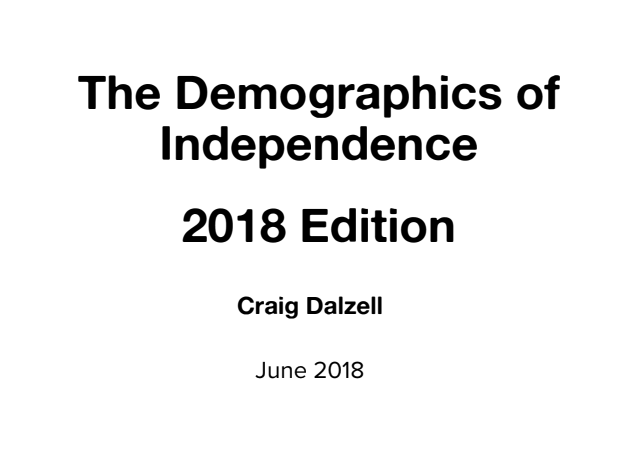 The Demographics of Independence – 2018 Edition

COMMON WEAL publishes an in-depth study of the demographics of independence supporters in Scotland.

This study is an update on one produced in January 2017 which can be read here and extends that study using new polling data to run from September 2014 – the date of the first independence referendum – till March 2018.

Some of the key findings include the substantial rise in independence support amongst young voters. The newly enfranchised 16 year olds from the first referendum will now be entering their 20s but their passion for independence does not seem to have diminshed and their younger peers appear, if anything, to be even more enthusiastic at the prospect of independence. Support amongst this age group has risen from around 45% in 2014 to around 65% in 2018.

Party Affliation remains a strong indicator of support for independence – it should be no surprise that SNP supporters are overwhelmingly in favour whilst Conservative voters remain overwhelmingly against – but the trends in support have been interesting. Support for independence amongst SNP voters was, for a long time, on the decline – reaching a low of 72% in early 2017 – but this trend has reversed and SNP voters are now as much in favour of independence as they were at the time of the referendum.

Finally, Liberal Democrat voters seem to be the most sensitive to events such as Brexit. The EU referendum result caused a sharp spike in independence support as voters considered Scottish independence as a mechanism of preserving EU membership. This support has remained volaitile, however, and has since retracted back to pre-referendum levels.

By contrast, voters born outside of Scotland and England have utterly changed their position on independence. Where once they were one of the demographics most likely to be against independence, support has risen to above 50%. Only around one third of this group will be EU citizens so it is possible that the direct impact of Brexit on these citizens – critical though it is – cannot fully explain this massive increase in support. The UK Government’s “hostile environment” policy towards immigrants and scandals such as those afflicting the Windrush Generation may also play a role in highlighting the inhumane policies of the UK Government towards incoming citizens and residents. The prospect of a more welcoming independent Scotland as well as policies such as the Scottish Government protecting their right to vote may be playing a role in public opinion here.

Finally, income and social class is also a strong indicator of independence support. Voters who fall into the C2DE social grades are both much more likely to support independence than richer peers but support within this group is rising whereas support in the ABC1 social group is low and declining.

An independence campaign which is founded on imrpoving the lot of people who already are fortunate enough to earn enough to pay upper rates of tax is almost certainly doomed to fail. Not only is this group much more likely to be against independence than their poorer counterparts, they – as a group – only make up around 15% of the total population so there simply aren’t enough of them to swing a referendum result – even if policies designed to appeal to this group do not involve disenfranchising other Scots.

This study can point towards trends in the polls and can point to who’s vote is changing and in which direction but it will take further study through canvassing and focus groups to delve into the question of why these views are changing. Only by fully understanding public opinion can a future independence campaign craft itself into one which can offer the policies of hope and change that will win the next independence referendum.