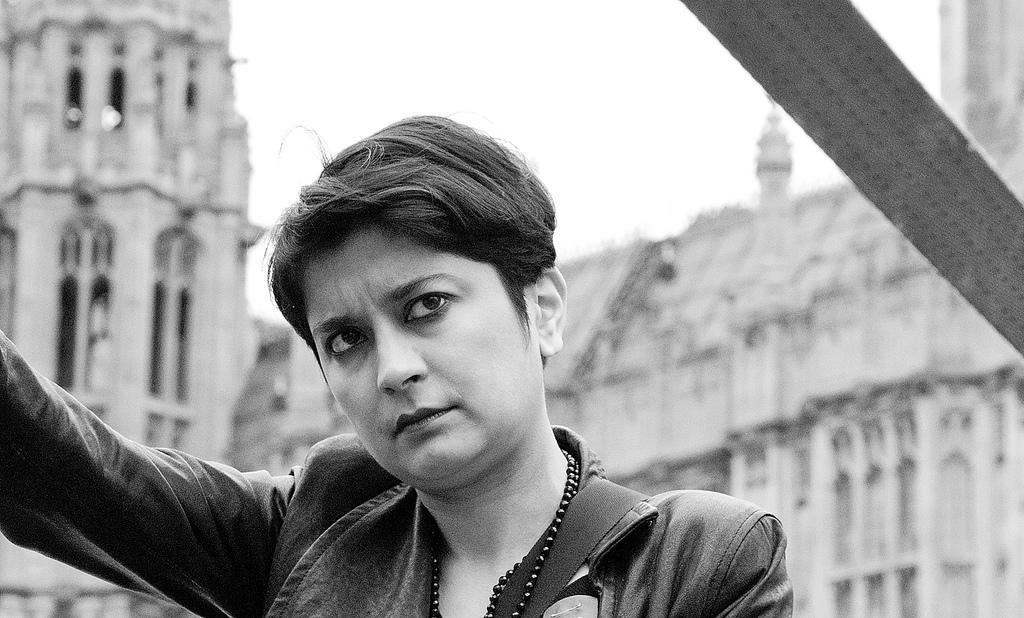 Director of Liberty talks to reporter Michael Gray about threats to civil liberties, human rights, and plans to engage more with Scottish politics

“IF they can get away with it,” Shami Chakrabarti emphasises to me early in our London interview.

It’s a reoccurring theme during our tour through potential threats to UK human rights, freedom of speech and the right to privacy. The new Tory government claims a majority in parliament, but Chakrabarti will ensure David Cameron cannot rest easy when he moves in an authoritarian direction.

Already her campaign organisation scored the earliest and most significant post-election success: delaying any repeal of the Human Rights Act.

“They will have done their numbers and worked out that there is a considerable concern among backbenchers, coupled with the new UK context,” she explains.

It’s the latest challenge in over a decade of pressuring all shades of UK Government on fundamental freedoms. Liberty, with Chakrabarti as its figurehead, took centre stage opposing Tony Blair’s crack down on civil liberties through the Terrorism Act.

On mandatory identification cards, deportation powers and interment without trial, it was Liberty that made the case for freedom in the face of authority and control.

“For too long, we have been a passively tolerant society, saying to our citizens: as long as you obey the law, we will leave you alone.” Prime Minister David Cameron

With the Human Rights Act repeal delayed – but not cancelled – she describes her mood as “positive but not complacent”. The Tory leadership, hurt by a refusal of leading MPs to back the move, was forced into a temporary retreat.

After further ‘consultation’, the debate is likely to return. “They will now be trying to repackage and rebrand the proposals to make them more acceptable. They will try and make deals with backbenchers… Human rights have to be saved every day and every year and every decade,” Chakrabarti says. She’s certainly not short of further rights to save.

As well as keeping an eye on attempts to water down human rights protections, the Tory leadership
plans a Snooper’s Charter (focused on claiming ever greater spying powers over digital information) and a ‘Counter-Extremism Bill’ (to criminalise forms of radical political speech).

The issue of ‘meta-data’ gathering rose to public prominence when whistleblower Edward Snowden, in conjunction with leading media organisations, revealed abuses by the National Security Agency in America and GCHQ in the UK.

The UK has seen a more lukewarm response to the scandal, compared to more active protests in Germany, Brazil and the United States.

“I hope this new dynamic of the SNP being the 3rd party could help Labour to reflect on the dangers of meta-data.” Shami Chakrabarti

For Chakrabarti, the lack of awareness is troubling: “Your web-log [of sites visited and actions online] can paint a massively intimate picture of your life, especially when you combine it with the location data of where you’ve been. So the idea that it’s just communications data and not quite intimate material is really quite a dangerous delusion.”

Snowden’s documents unveiled spying on US-UK allies, corporate espionage and a vast expansion in unaccountable gathering of personal phone and internet records, yet at the time digital privacy remained on the periphery of UK debate.

“Part of our problem has been the lack of effective opposition to blanket surveillance. Frankly, Snooper’s Charter number one began with the New Labour government and you had the Conservatives, once they came into coalition, shelving its libertarian position, and the Liberal Democrats effectively swallowed,” bemoans Chakrabarti.

“The Labour party, when it was in opposition, didn’t shift from the orthodoxy of playing to the right on security. Now there is a new opportunity with Labour, but also we have the voice of the SNP, which I hope can start creating a race to the top and not the bottom on the liberal vs authoritarian agenda.

“I hope this new dynamic of the SNP being the 3rd party could help Labour to reflect on the dangers of meta-data.”

While Labour and Liberals provided minimal opposition, it was down to Liberty and other campaign groups to fill the void. One important moment came when the courts found that GCHQ – the UK Government spying service – was found to have broken the law.

It still rankles with the director of Liberty: “The outrage that Snowden exposes and that our litigation exposes is that this was going on [mass surveillance] with no legal basis.

“When we were having these arguments about Snooper’s Charter – different proposals were being written and dropped – they [GCHQ] were doing these things anyway, outside the law. And that is contempt for parliamentary democracy and the rule of law.”

“They’re protecting free speech against ‘wicked Muslims’ but they’re not accepting the free speech of Muslims. You can’t do that. It doesn’t work.” Shami Chakrabarti

The remit of the Home Office doesn’t end there. The ‘Counter-Extremism Bill’ – which “ought to chill your heart just with its title” according to Chakrabarti – intends to impose tougher restrictions on those who spread “extreme” ideas in the media and at political events.

David Cameron, announcing consultation on the Bill, said: “For too long, we have been a passively tolerant society, saying to our citizens: as long as you obey the law, we will leave you alone.”

Cameron’s words suggest that if someone falls into the category of ‘Muslim extremist’ (which the planned law specifically targets), obeying the current law is no longer enough.

Just months ago, David Cameron stood alongside world leaders in a show of solidarity with the bravery of Charlie Hebdo, the French satirical magazine which was attacked for depicting the prophet Muhammad.

“They’re protecting free speech against ‘wicked Muslims’ but they’re not accepting the free speech of Muslims. You can’t do that. It doesn’t work. It leads to extremism. There’s nothing more likely to radicalise people than the obvious injustice of hypocrisy. That’s the problem,” Chakrabarti explains.

These three proposed law changes suggest that the UK is becoming a less hospitable place for civil liberties. However, the second major change during May’s election – the surge of the SNP – gives Chakrabarti some hope.

“We’ve had an authoritarian arms race in Westminster politics… The competition to be to the right of each other on terrorism, immigration, law and order.” Shami Chakrabarti

The SNP has a mixed record on civil liberties – opposing the crack down that followed the ‘war on terror’, while blocking the right of prisoners to vote and banning ‘offensive’ singing in Scotland.

“There is a big opportunity in Westminster, partly because you’ve got a bunch of people who are new to Westminster politics who are not complicit in the worst aspects of the ‘war on terror’, who are fresh faces in the palace of Westminster, and are already committed as a party to defending the Human Rights Act. So that’s a very good start,” says Chakrabarti.

“We’ve had an authoritarian arms race in Westminster politics for the best part of 20 years. It started with Michael Howard and Tony Blair [Howard was Home Secretary, Blair shadow Home Secretary 1992-94] and it continued.

“[It was a] competition to be to the right of each other on terrorism, immigration, law and order.Having a new party in Westminster which has declared itself a progressive party and said it can be a progressive force in UK politics is a whole in an opportunity for us.”

“The challenge is that you have a party which is a one party government in Scotland. With the best will in the world that’s going to bring challenges. When any single party has such dominance in parliament.

“We have to recognise that. I’m sure members of the SNP would recognise that it’s important that civic society do scrutinise very carefully the work of the Scottish Government, given the limited numbers of the opposition.”

Like Nicola Sturgeon, Chakrabarti was once dubbed “the most dangerous woman in Britain” in a tabloid paper. How does she feel about losing the title to Scotland’s first minister?

“Completely outraged,” she jokes. “No, I hope she wears it well and enjoys it. For me, my brief reign being ‘the most dangerous woman in Britain’ was the gift that kept on giving.”

She adds that Liberty plans to be “more present” in Scotland as a civil liberties campaign group.

The group’s current HQ is not far from Westminster – keeping a watchful eye on the activities of the ministry of justice and the home office. It’s a place Chakrabarti knows well, as she used to work as a barrister for the Home Office.

Then she changed tack, campaigning from the outside to protect individual freedoms from the abuse of power.One moment that captures that conflict was her appearance on BBC show Question Time.

When Labour minister Geoff Hoon prevaricated over the government’s involvement in torture, Chakrabarti hit back. When told she was “emotional”, with venom she replied: “Yes, I am emotional about torture, sir.”

Under pressure and in the spotlight, what keeps her going?

“Solidarity. It’s an old fashioned phrase. Knowing you’re not alone, knowing that other people share these values – not just on these islands but all over the world. The greatest danger is complacency about human rights. You can take freedoms for granted in the face of government power, corporate power or criminal power.

“People all over the world are dreaming of the rights and freedoms that we enjoy. And that’s what keeps you going. Solidarity with people here and people everywhere. Because these values aren’t mine. These are universal values, I really believe that.”