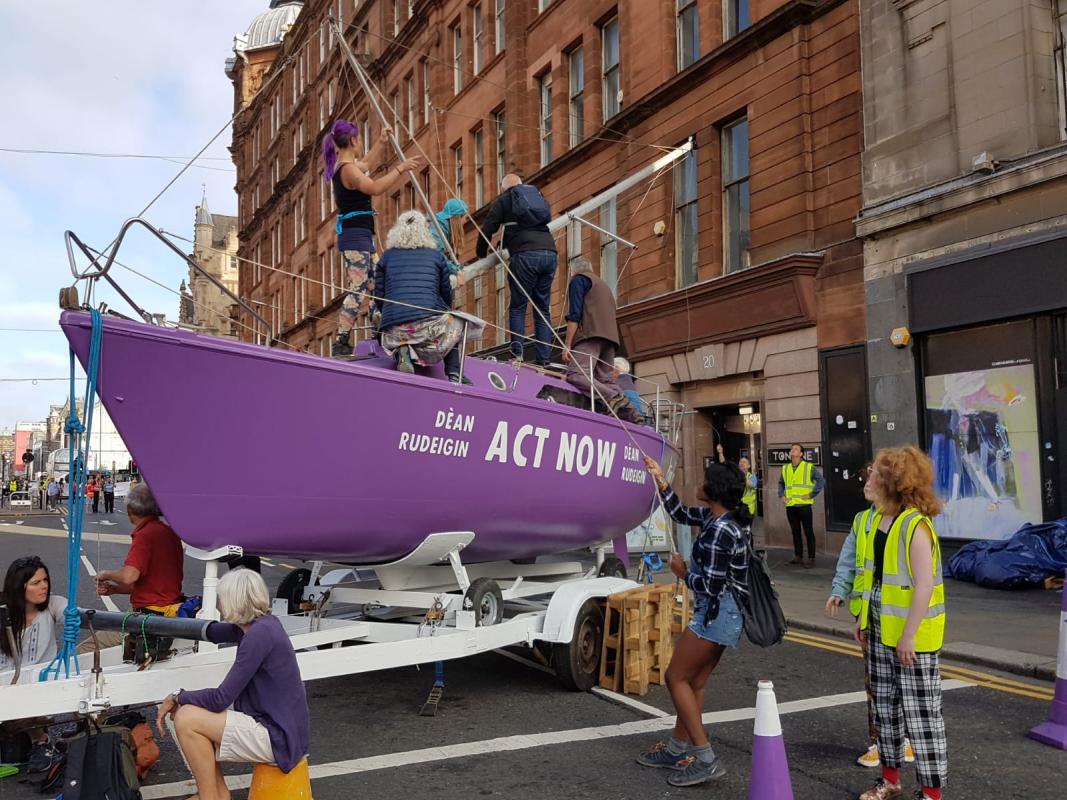 In addition to Glasgow, four other boats similar to that which occupied Oxford Circus during the environmentalist group’s ‘International Rebellion’ in August are today being used to occupy spaces or block roads in London, Cardiff, Bristol and Leeds.

The boats have been painted with the words “Act Now”, in reference to Extinction Rebellion’s demand that “government must act now to halt biodiversity loss and reduce greenhouse gas emissions to net zero by 2025.”

The Glasgow boat also bears the slogan “The Future You Fear is Already Here”, focusing on those who have already been displaced by climate change, with hundreds of millions expected to be made climate refugees due to climate breakdown by 2050.

Working in collaboration with Gàidheil XR, the statements on the side of the boat are painted both in English and Scots Gaelic, “Dèan Rudeigin” and “Tha àm an eagail ann my thràth”. The boat itself has been named Amal Gous, after a Sudanese activist and tea seller murdered in June by Sudanese authorities after she participated in a peaceful sit-in before the army general command in Khartoum.

Extinction Rebellion Scotland activist Dougie Graham commented: “Climate breakdown has already begun, with those hit first and hardest often the poorest and therefore least able to adapt. We are currently accepting a path where millions will be displaced or die. By not acting we are collectively complicit in this.

“We are also not immune to the effects of climate breakdown. We either change direction or it gets changed for us. How severe this change will be depends on our actions now. We have the technology and capability to make the change we need now! To carry on as business as usual is madness. We must act now!”

Also commenting, Extinction Rebellion Scotland activist Daniel Armstrong added: “As the water reserves dry up, like we have seen in India. As the coral reefs die off, causing mass destruction of sea wildlife. As the trees are cut down, as the ice caps melt, as the air gets polluted. As resource’s necessary for survival gets more and more scare, and the world experiences the biggest influx of homeless refugees the world has ever seen, due to water rises and areas are made uninhabitable.

“The situation will get desperate, when people are starving, displaced and desperate. We will see war, we will see people fighting for survival, it will be chaos.

“This is why, we must, act now, if we are to have any change of averting environmental collapse. We must swiftly respond to the climate emergency, with the kind of urgency an emergency requires.

“The truth is, on our current path, we have limited time to reverse the breakdown of the environment. Time is running out. Act Now.”