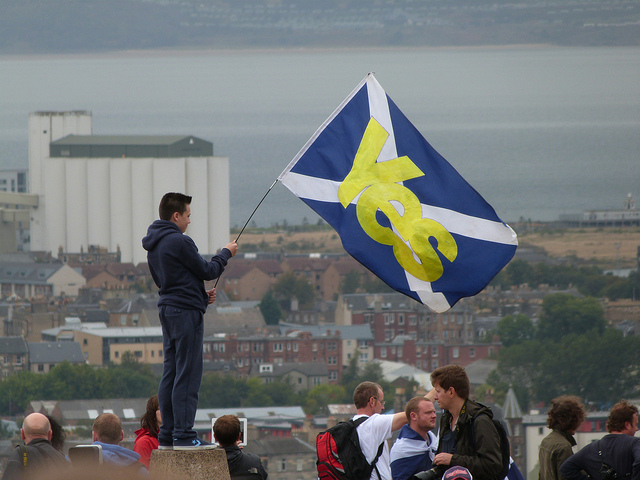 THE ROAD to independence will be paved by a strong grassroots, and not by a focus on party politics, National Yes Registry (NYR) coordinator Jason Baird has said ahead of the organisation’s upcoming gathering for pro-independence groups.

Taking place at the Albert Halls in Stirling on Sunday 27 May, the event marks the culmination of NYR’s work creating the IndyApp, a networking tool for the Yes movement.

With over 140 groups now signed up to the app, the gathering will be an opportunity for people to meet face to face and get down to the hard work of developing a jointly agreed, but continually developing, strategy for grassroots campaigning.

“We’ve got a majority of MSPs, MPs, and councillors, but we don’t have independence – so what’s missing?” Jason Baird, National Yes Registry

NYR’s role, Baird said, is to facilitate the groups and provide a platform for their ideas. “We found that last time [in the 2014 referendum] lots of groups were re-inventing the wheel but there was no way for groups to mentor each other – there was no platform to share that information,” he said.

The Gathering comes two weeks before the SNP’s spring conference in June.

In June 2017, First Minister Nicola Sturgeon pulled back from a Scottish Parliament mandate to pursue a section 30 order with the UK Government to hold a second independence referendum after worse than expected general election results, where the SNP only just hung on to a majority of Scottish MPs.

The debate over when to hold a future independence referendum has since been divided, with SNP MP Pete Wishart arguing against a referendum in the near future and Angus MacNeill MP making the case for a referendum vote in the next 18 months.

In that uncertain context, The Gathering, and the IndyApp more broadly, aims to get people organised and start joining the dots between groups across the country.

“The best ideas in the first referendum came from the ground – it didn’t come from above,” Baird said. “If you look at the way the referendum campaign was last time, the grassroots really took hold in areas where party politics was weaker and where there weren’t SNP politicians at that time.

“North East Scotland was very party political, but in my experience of the central belt, the campaign was driven by a lot of people not involved in party politics.”

Baird said it was important that the grassroots continue to work on a “non-party political message”, and that the NYR’s work is committed to including people of all parties and none. Stressing that this was not a criticism of the SNP, Greens or the SSP, Baird said the need for a distinct grassroots campaign was complimentary, and not oppositional, to the work of politicians.

“If it falls into a party political framework, I think we will face real difficulty, because parties are divisive. You can win an election with 35 per cent of the vote, but you can’t win a referendum,” he said.

Adding that he is not a member of any political party himself, Baird said: “I’m aware we need the SNP to call the referendum – but the grassroots will win it.

“We’ve got a majority of MSPs, MPs, and councillors, but we don’t have independence – so what’s missing? We need the grassroots.”

With this in mind, NYR is developing a firmly participative approach. Groups signed up to the app will put forward a few topics in advance of the event that they feel should be discussed, and from those NYR will draw up an agenda and 25 workshops to take place during the morning.

Participants will vote for five topics from the 25 to take forward to the afternoon, and all of the details will be posted on the IndyApp afterwards to allow others to contribute and start working towards shared goals as effective campaigning organisations.

Baird said he hoped that this would help to “unify the movement on a social level” and support meaningful discussion on ideas outside of the realm of factionalism.

“We are hoping that groups will work together on ideas and it won’t be perceived as the pet project of a certain personality.” Jason Baird, National Yes Registry

“There are personalities high up in the movement who have great ideas, and they’ve also got their supporters and their detractors. Recently what’s been happening is that an idea is assessed not on its merits but on who it’s coming from. It’s a personality issue,” he said.

“We are hoping that through the event groups will work together on ideas and it won’t be perceived as the pet project of a certain personality or faction.”

Ultimately, Baird said, the Gathering and ongoing work through the IndyApp is about “giving as many people the chance to have a voice as possible”.

Keen to stress that NYR aims to take a background role in all of this, Baird said: “We are not really at the front of anything, we don’t see ourselves as leaders.

“We’re just trying to be a service to the movement, and whatever leadership forms from the grassroots. We don’t have any agenda at all.”

Groups can sign up to the app by contacting NYR here, and will be provided with purchase codes directly.