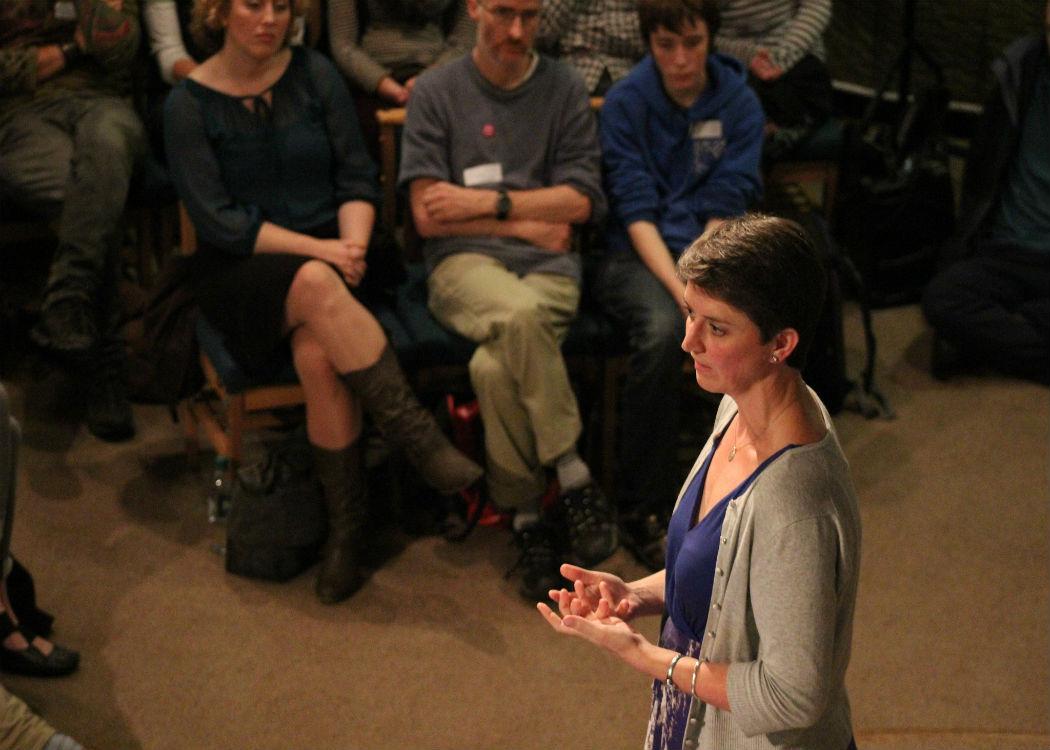 Ben Wray speaks to Scottish Greens co-convenor Maggie Chapman about her experience at the helm of the Scottish Greens, and what the party’s ambitions are in the upcoming General Election and beyond

WHAT price on a well-produced, funny video? The Greens have been able to capture social media – even if only for a few days – with their #changethetune election video. It manages to be funny without being cringworthy; clever without being inaccessible. As is evident from previous attempts by political parties at creating election videos, it is a tricky task. (Click here to read more).

In Scotland, there’s an almost as funny video of party co-convenor Maggie Chapman riding around Aberdeen University on an Aberdeen Angus cow held up by burly rugby players as part of her inauguration as student rector last month. (Click here to watch).

“It was great fun,” Chapman tells CommonSpace, “All the ancient universities have their funny, quirky traditions, and riding around on an Angus cow is Aberdeen’s.”

Chapman is busy. Not only has she become rector of a university, she is a lecturer at another one – Napier – and also manages to squeeze in time to be a councillor in Edinburgh and co-convenor of the Scottish Greens as well.

Smith Commission and not being Patrick

At the end of last year, Chapman was one of two Green delegates to participate in the Smith Commission on more powers for Scotland. Chapman looks back upon it as a learning experience.

“It was a very interesting experience for me personally. I learnt an awful lot by being involved in a process like that.

“The behaviour of some of the other parties in the process – it didn’t shock me, but the level of collaboration, especially between the Conservatives and Labour, around retaining power at Westminster, it was quite surprising.”

Labour and Tories working together on constitutional politics is not headline news in Scotland 2015, but Chapman’s specific examples point to a degree of UK-centric thinking that might not be fully appreciated.

“I remember one of our conversations very clearly about employment law. We were arguing for the devolution of employment law to get rid of the anti-trade union legislation that Thatcher brought in, and the Labour party turned round and just said ‘no’.

“They said they had been talking to the TUC, and at that point it became quite clear to me: that they were locating themselves first and foremost in the UK, in the UK Labour party and in the UK context, rather than standing with Scottish trade unions and Scottish workers. Because, of course, the STUC’s position was very different: they were for the devolution of employment law. I think that’s a fairly damning indictment of where the Labour party in Scotland sees itself.”

“It’s galling when you hear mainstream media, who do know better, referring to Patrick as leader of the party.” Maggie Chapman

Chapman, who was born and brought up in Harare, Zimbabwe, has been co-convenor of the party for nearly two years, but admits that it can be difficult when so much of the media still refer to Patrick Harvie, the Scottish party’s most high profile figure, as party leader.

“It’s galling when you hear mainstream media, who do know better, referring to Patrick as leader of the party,” Chapman says.

“I think as a party we need to take some responsibility over that, in terms of how we approach media, how we use the avenues open to us, to promote not only me as an individual but the role of female co-convenor.

“I think that’s becoming easier to do, because people are looking for a new type of politics, a politics that’s not just about men in suits. And we should call it out, when people say Patrick Harvie leader of the Scottish Greens, we should say ‘no, we do have co-convenors, and we have co-convenors for a reason’.”

Certainly, the party manifesto launch – gender balanced – reflected diversity, and appeared professional with clear policies and a glossy presentation. But is standing in the General Election the right move for a party that has no real ambitions to win a seat in Scotland in May?

Many in the pro-independence movement believe that now is the time to get behind the SNP to ensure the Labour party gets a kicking.

“Personally, I’m sorry we couldn’t come to some kind of arrangement with the SNP and others for the General Election,” Chapman says. “But we’re a political party, the SNP is a political party, and I can understand that desire to stand as your own party.”

With Scottish Labour seemingly in decline and disarray, can the Greens capture the constituency that associates themselves with old labour values of the workers movement and socialism?

“We have broad appeal, but from my point of view as co-convenor our policies are there to serve the interest of workers in their communities. I have no hesitation in calling myself a socialist, and I think we have socialist principles and socialist policies.”

Are the Greens a socialist party?

“There are many of us who are socialists, is the party as a whole socialist? I’d like to say yes, but I don’t know if I can… I think what we have is a very clear understanding that you do not get environmental justice without social and economic justice as well. I think we build on principles of redistribution, equality and fairness, and I think that’s where we are at as a party.”

“I think we still have work to do in terms of our identity,” Maggie Chapman

The distinction between personal association and party association raises a perennial issue for Greens: the party’s identity. The party will always be associated with the environment. It has made stringent efforts to show it stands for green politics more generally, and the 2015 General Election manifesto focuses as much on a PS10 minimum wage by 2020 as on achieving an outright ban on fracking.

“It’s always been a green principle to tackle the cause of the problem. And the cause of economic and environmental catastrophe is a corporatist, capitalist system that serves only the interests of the elite.”

With increasing size and success comes increasing responsibility, and many Green parties in Europe have found it difficult to find the balance between maintaining the party’s principles and compromising enough to access political power.

Two distinct strategies can be seen across Europe: In Holland and Greece, the party has looked towards red-green alliances, building unity with radical left forces like Syriza, whereas in Ireland and Germany green parties have gone into coalition with new Labour-style parties such as the SPD in Germany, and the centre-right Fianna Fail in Ireland.

Which approach would the party take in Scotland if a coalition was up for grabs after the 2016 Scottish elections?

“Patrick [Harvie] said at the manifesto launch that we wouldn’t prop up a government based on more oil extraction, so I think that’s quite clear. I think coalition politics is not always the best way to do it, I think we worked effectively when there was an SNP minority government.

“We want to see our policies implemented in government, we wouldn’t be in a party if we didn’t want to do that, but we have to be clear about the upsides and downsides of any parliamentary agreement.

“The Greens in Ireland and Germany, particularly the German Greens, I really hope we as a party never do some of the things they have done. They’ve stood next to politicians with pretty socially conservative views, who think it’s okay to demonise sections of society because of their sexual or religious beliefs. That will never be a politics I’ll engage in, and I don’t think our party ever will either.”

She said the party would find it difficult to countenance an approach whereby Patrick Harvie is made environment minister in a government that the party has no wider influence over.

“In fact, I don’t think environment minister would be the position that I think we should take if it came to a scenario like that,” Chapman added. “There are things that are much more deeply rooted in getting the ultimate environmental outcomes we want, like important economic powers.”

“In fact, I don’t think environment minister would be the position that I think we should take,” Maggie Chapman

Chapman said one of the headline gains the party got out of supporting a minority SNP government was the Climate Change Fund, which included money for communities on action around climate change.

“It’s obviously a live discussion in the party about how to prepare for a possible minority SNP government scenario after the 2016 Scottish elections, and we have the democratic structures in place to do that,” she adds.

The Scottish Greens enter the 2015 General Election with a growing membership (over 9,000), a freshly boosted profile from its sister party’s hit video and Patrick Harvie’s assured appearance in the BBC TV election debate, but it’s beyond 2015 where the opportunities to wield real influence lie for the Scottish Greens.