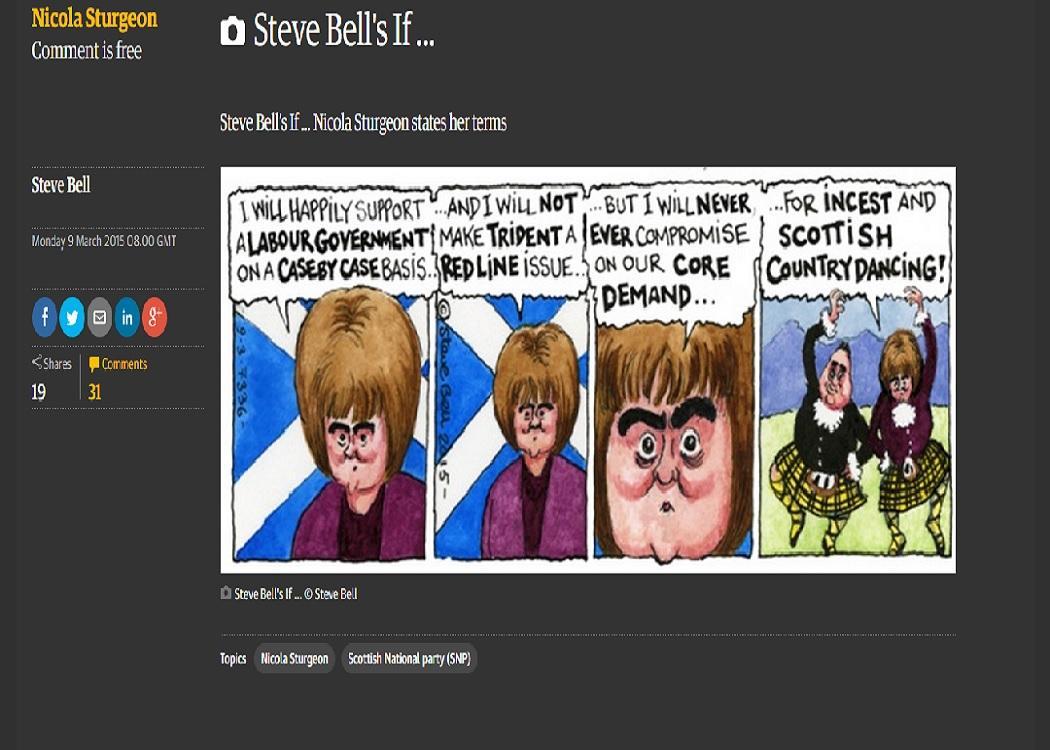 THE Guardian received over 300 complaints about a cartoon on its site that depicted Nicola Sturgeon as supporting incest and country dancing, but has said it is not racist and defended the cartoonist Steve Bell’s “right to draw it”.

The cartoon (pictured above) showed Nicola Sturgeon, first minister, saying she would “happily support a Labour government on a case by case basis”, adding that trident would not be a red line issue but she would “never compromise” on Scottish country dancing and incest. The final slide depicted Sturgeon and former party leader Alex Salmond dancing in kilts.

The Guardian readers’ editor Chris Elliott admitted complaints were not just from Scottish nationalists, but defended Bell’s cartoon, saying it was focused on challenging nationalism.

Elliot wrote to complainants: “I am sorry that you were so offended by yesterday’s If … cartoon. Bell was referring to a quotation that he remembers as ‘You should be prepared to try everything once except for incest and Scottish country dancing.’ However, he says his real intention was to examine ‘the irrational, atavistic urges at the root of Scottish or indeed any form of nationalism’.

“His focus is nationalism and he denies any form of racism, which I accept because he targets everyone in a style that alludes to the 18th-century cartoonists Gillray and Hogarth. He is also half Scottish himself.

“Many of his cartoons have caused offence over the years but I have always defended his right to offend, even on occasions when I have missed the joke. However, his work has also been one of the best beloved aspects of the Guardian for more than 30 years.”

Elliott quoted Bell in defence of his cartoon: “I can only ask: what are the core demands of the SNP, failing trident (that sparked the cartoon) or social justice? Obviously their core demands do not include incest and Scottish country dancing. I wasn’t seriously suggesting that they did. That was a joke. Not everyone found it funny.”

Bell added that he believed the criticism was “manufactured outrage” led by “former fans on the left who have thrown in their lot with the Yes/SNP campaign”.

Elliot said Bell was “an equal-opportunities offender over many years”, adding: “I do think his brand of leftwing views finds nationalism of any kind anathema.”

“I am not defending the cartoon, but I do defend his right to draw it,” Elliot concluded.

CommonSpace reported last week (click here to read more) on the Twitter storm the cartoon created, with one person stating: “The Guardian, with one small cartoon has managed to lower its standards below The Sun and the Daily Mail.”

Picture courtesy of the Guardian