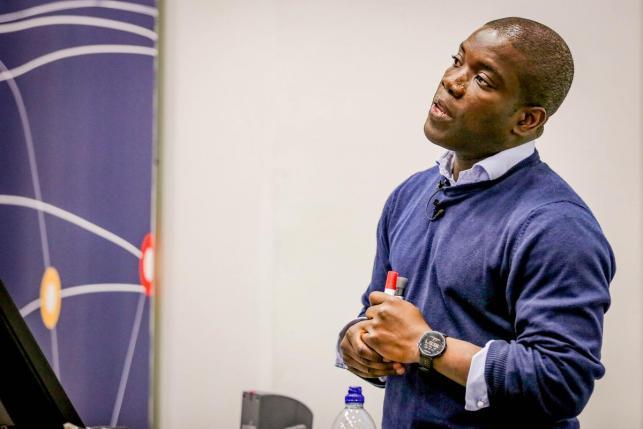 KWEKU ADOBOLI, the former UBS banker convicted in 2012 for fraud following his involvement in what has been described as “the largest trading loss in the British banking history,” has spoken publicly for the first time since his deportation to Ghana by British authorities, describing the “violence and draconian policy” of the UK’s criminal justice system and immigration policy.

Adoboli was deported to Ghana – the nation of his birth, where he has not lived since he was four years old – last week on 14 November, accompanied by five security guards.

Despite being released from prison in 2015, any foreign national sentenced to more than four years is automatically considered for deportation. In June of this year, Adoboli’s four year legal battle to overturn the deportation order against him was rejected by the court of appeal.

In an emotional interview with the Ghanian TV news organisation Joy News, Adoboli described the circumstances of his deportation, including how he was only given access to a phone to say goodbye to his loved ones five minutes before his Air Kenya flight departed from Heathrow to Nairobi.

Describing the guards accompanying him, Adoboli said: “Five people to transport one human being – like a piece of cargo.”

According to the Keep Kweku campaign, Adoboli received “absolutely no warning” before the deportation took place, and had little time to pack a few belongings from his detention cell at the Harmondsworth Immigration Removal Centre.

“What people don’t understand about the deportation process is that once you’re deported from one of the G20 nations – anywhere in the West, pretty much – you can’t return to that country for 10 years, minimum.” Kweku Adoboli

Adoboli also claimed that he had repeatedly offered to leave for Ghana of his own free will, at his own expense, should his legal appeals be unsuccessful. Nevertheless, the Home Office insisted upon his guarded transportation, which involved the threat of force against him should be become violent or “vocal.”

“They [the Home Office] wanted this to happen on that day,” Adoboli recounted. “They forced it.”

Elaborating on the restrictions he now faces, Adboli continued: “What people don’t understand about the deportation process is that once you’re deported from one of the G20 nations – anywhere in the West, pretty much – you can’t return to that country for 10 years, minimum. On top of that, you then have to apply to go back. But the test to decide whether you can go back is the same test they use to use decide whether to deport you. So once they deport you, you’re never going back.

READ MORE: ‘What happened at the bank had nothing to do with my nationality’: former jailed banker Kweku Adoboli on his fight against imminent deportation

Adoboli also expressed how humbled he was by his arrival in Ghana – where, according to a representative of the Keep Kweku campaign, he has been treated with “dignity and respect”, clarifying that it was the deportation, rather than his destination, that he was fighting against.

Adoboli further argued that photographs which had circulated on social media, which appeared to show him as disconsolate upon arrival, had been taken out of context, and did not reflect his feelings on the country itself.

Adoboli said: “When you contrast the welcome of Ghana against the violence and draconian policy of the UK, in sending me here in the way that they did, those pictures reflect what it does to a human being.”

“The human cost of this is impossible to describe.”

Despite the events of the past week, the Keep Kweku campaign, which had previously fought against his deportation, is now agitating not only to return him to the UK “well before the end of any 10 year banishment”, but also to secure a commitment from the Home Office to meet the recommendations of the Stephen Shaw Review into Immigrant Detention.

In July of this year, the home secretary commended these recommendations in the House of Commons. Most relevant to Adoboli’s case is Recommendation 33, which states: “The Home Office should no longer routinely seek to remove those who were born in the UK or have been brought up here from an early age.”

The report also states: “For low-risk offenders, it seems entirely disproportionate to tear them away from their lives, families and friends in the UK, and send them to countries where they may not speak the language or have any ties. For those who have committed serious crimes, there is also a further question of whether it is right to send high-risk offenders to another country when their offending follows an upbringing in the UK.”

At the time of writing, 138 MPs and MSPs have signed a cross-party letter calling on Home Secretary Sajid Javid to deploy his discretionary powers to stop the deportation order and grant him indefinite leave to remain in the UK, his home for 26 years. 75,000 members of the public have also signed a petition asking him to do likewise.

The night prior to Adoboli’s deportation, Tory MP Sir Peter Bottomley, Labour MP Keith Vaz and Adoboli’s local SNP MP Hannah Bardell met with immigration minister Caroline Nokes. The group were told she would “reflect” on the possibility of halting the deportation, but were informed an hour later it would go ahead as planned.

Nick Hopewell-Smith, a friend of Adoboli’s involved in the Keep Kweku campaign, commented: “Clearly, the manner with which the Home Office has elected to deport Kweku has been unnecessarily brutal, both to him and the people who love him. But it is symptomatic of a hostile environment culture that’s so deeply embedded within the Home Office, that it now affects the judgment and behaviour of everyone tasked to deal with immigrants and foreign national offenders.”

“The Home Secretary said he had no discretion to revoke the deportation order signed in favour of Kweku.  This is not true.” Kweku Adoboli lawyer Jacqui McKenzie

“In the three years I have been working with Kweku, I am convinced that, whatever various hearings may have concluded to date, he has surpassed any fair threshold for compelling reasons to have his deportation revoked and while I may not be a lawyer, I believe he has been poorly served by our legal process.  That’s why several of us who have supported Kweku in his struggle will now make efforts to ensure that the Home Office meets the obligations required of it by Stephen Shaw’s Report and – should it be necessary – we will lobby for amendments to the 2007 UK Borders Act.”

Adoboli’s specialist immigration lawyer, Jacqui McKenzie of McKenzie, Beute & Pope, also commented in a statement released following his deportation, in which she questions the claims made by the home secretary regarding his case.

“The Home Secretary also wrote accusing Kweku of having abused the country’s hospitality, totally oblivious to the facts of the case and that Kweku had arrived in the UK as a child. The Home Secretary and the Immigration minister chose to maintain their position on Kweku’s’s case and to find that the material submitted did not amount to a fresh claim, so the ongoing merits of deportation could not be scrutinised by an independent judge. He should recognise this rather than hiding behind the intention of parliament to deport foreign nationals or claiming justification in the public interest.

“Kweku’s removal is devastating and in line with the government’s own stated policy of operating a hostile immigration environment which resulted in the Windrush scandal and the deportation and removal of many people, wrongly – and not just those of the Windrush generation.

“Kweku has a rich legacy to protect and will fight on, firstly to prove that he was not the fraudster as labelled and to show that the system that could lead to the deportation of a man who had lived in the UK for 26 of his 38 years, contrary to Stephen Shaw’s clear recommendation in his review of this year and flying in the face of many good people and organisations clamouring for Kweku to stay, means that we have not heard the end of Kweku Adoboli or this case, by a long shot.”