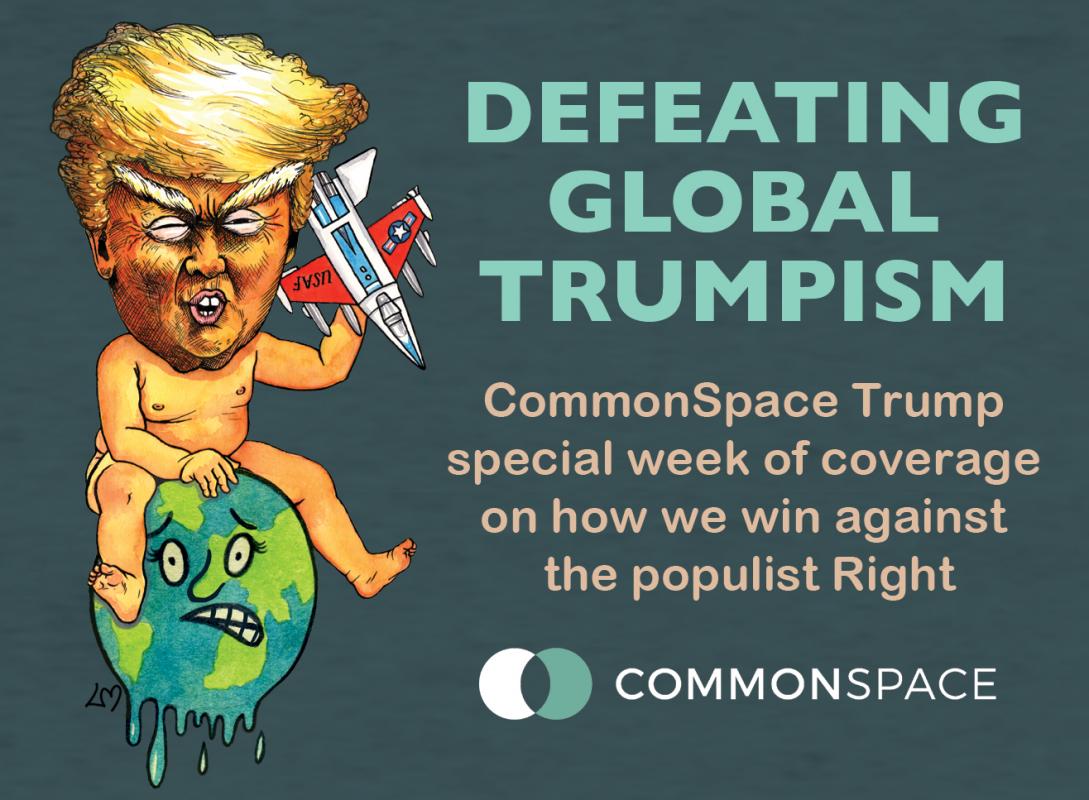 As CommonSpace’s Trump Special begins, Ben Wray explores how we should locate Trump in a broader historical context through the lens of professor Mark Blyth’s concept of Global Trumpism – does Trump represent the beginning or end of something in western politics?

THERE’S a million questions you could ask about Donald Trump as he is about to make his first visit to Scotland as US President, but perhaps the most important is – does he represent the beginning of something new, or the end of something old?

Some argue Trump is the last gasp of an older generation who never accepted multiculturalism and mass entry of women into the workplace, and will inevitably be washed away by a new, tech-savvy, urbane generation, who have known nothing other than diverse communities and are instinctively tolerant on issues like abortion rights and civil marriage.

The more sophisticated versions of this argument make the case that Trump has exploited a temporary coalition which has emerged between a section who have suffered from the financial crisis and unreconstructed bigots, and that when the economy recovers this alliance will quickly lose political potency.

WATCH: How you can get involved in CommonSpace’s Defeating Global Trumpism Week

Those who argue this put Brexit in the same bracket, pointing to the age divide between younger Remainers and older Leavers and data which shows richer and poorer both voted for Brexit.

This argument is convenient for those who think there is not really any major structural problems with the way western capitalism is organised. As long as we protect the economic and political institutions from these temporary illnesses, the host will recover its strength, and time and growth will wash away all discontent.

This argument is wrong on two interconnected levels.

The first is that it is a mistake to assume older generations’ concerns are purely cultural, just as it would be wrong to think of young peoples’ concerns as purely economic. Political life is invariably a dynamic interaction between cultural and economic experience, both feeding into and animating ones worldview.

The second is that we are now rapidly approaching the 10 years anniversary of the financial crisis, and it is increasingly clear that far from the crash being a blip in an otherwise stable system, it exposed an economic order that is fundamentally unstable and unsustainable, and has been materially disadvantageous for a section of western society (whom I will go on to explain later) long before the crash actually occurred.

In other words, Trump can’t be explained purely by contemporary economic and social phenomena. He is the inevitable political outcome of a deep sickness in the bones of our economic and social order, one that will not be fixed without acute and painful surgery to the system itself.

Mark Blyth, professor of International Political Economy at Brown University in the US (Scottish by birth), was one of the few political commentators to predict both Brexit and Trump’s election, and has conceptualised the revolt of Trump and others against the traditional political establishment as the product of 30 years of deep structural changes, calling this phenomenon Global Trumpism.

Blyth’s narrative is that from 1945-75 the post-war economic order was organised around the economic goal of full employment. The effect of this was to create what he dubs a “debtors paradise” – full employment drove inflation, strong unions and a higher share of national income to labour, which ate into the value of debts, reduced the power of bankers and made investment unprofitable.

The neoliberal revolution fundamentally turned this order on its head, creating a creditors paradise – deflation keeping the value of debts high, unions fundamentally weakened, markets and supply chains internationalised, a greater share of national income to capital, finance and the investor class powerful.

The impact of this was to supress wages and increase consumer debt, with the crash being the point where that unsustainable debt build up became unpayable. But even before the crisis, a class of debtors had not done well out of this new economic order. As the famous elephant chart from Brank Milankovic shows, the western working class was the constituency in the global economy (represented by letter B below) which didn’t see any improvement from the 20 years when the neoliberal economy boomed. 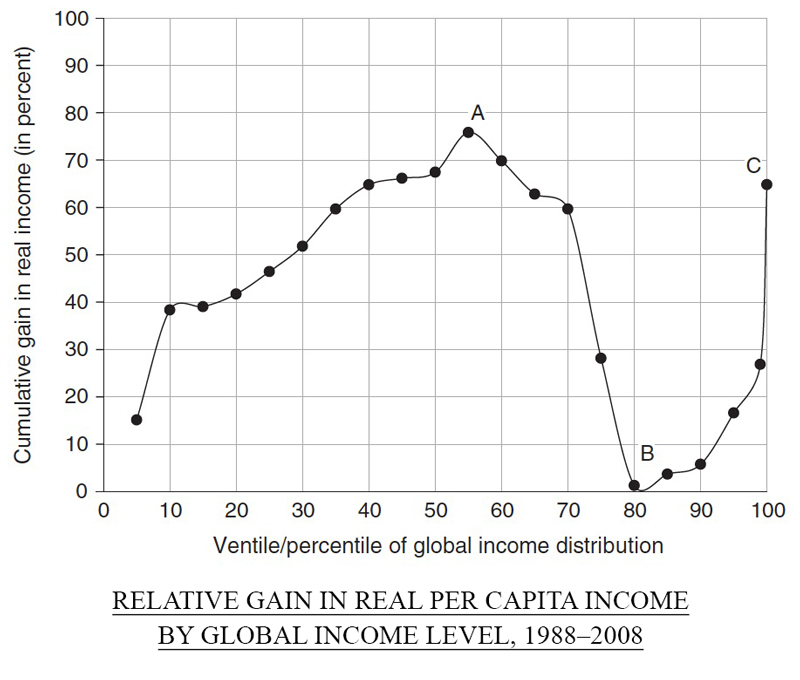 Thus the shock of the crash and the subsequent bank bailouts, austerity and wage stagnation was not a reversal of fortunes for many – it acted instead to reaffirm that feeling that they were being left behind and that there was an inherent injustice to this. Thus Trump has successfully mobilised the anger of the debtor class against the creditors’ paradise which the political centre – right or left – has been telling them for 30 years has been in their best interest.

Blyth uses the fictitious example of Gary from Gary, Indiana to explain the archetypal person who would find Trump appealing.

It’s important to understand that it’s not just loss of income which turns Gary from Gary, Indiana to Trump – Blyth’s research found higher support for global Trumpism where Chinese import substitution was higher, as well as health inequalities, job insecurity and exposure to technological disruption. That general feeling of being left behind and loss of status is where the cultural and economic meet, with the immigrant becoming the easy scapegoat for this feeling of decline.

If anyone is in any doubt that Trump identified this and successfully exploited it – taking advantage of the fact his opponent, Hillary Clinton, was in the White House when much of the neoliberal era was being embedded (e.g. Nafta) – watch this video of Trump on the campaign trail in Flint, a former car manufacturing town which undergone a major water poisoning crisis after water privatisation.

This is effective because it hits on a deep truth about what’s happened to large parts of America, and it’s wrong to say that it is an appeal exclusively to the “white working class”. As Stanley B. Greenberg points out:

“The Democrats don’t have a “white working-class problem.” They have a “working-class problem,” which progressives have been reluctant to address honestly or boldly. The fact is that Democrats have lost support with all working-class voters across the electorate, including the Rising American Electorate of minorities, unmarried women, and millennials. This decline contributed mightily to the Democrats’ losses in the states and Congress and to the election of Donald Trump.”

This is true for centre-left parties across Europe, which are increasingly reliant on the highly educated for their vote share as the working class look for support from those who aren’t just going to represent the creditors paradise, as this Thomas Piketty graph proves: 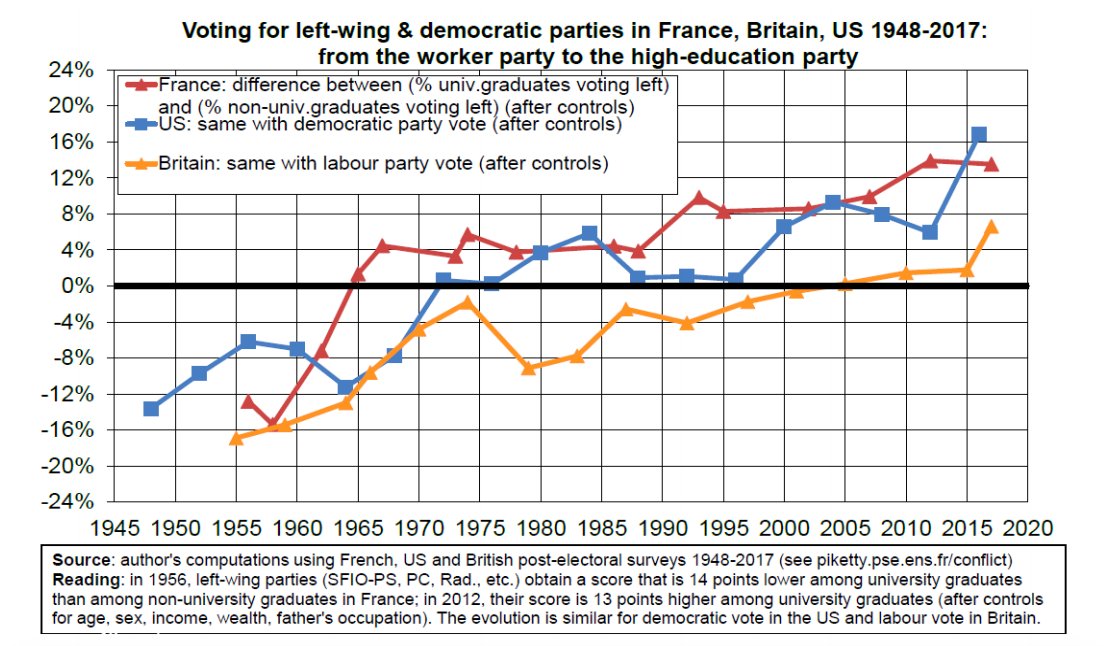 The problem with this isn’t that it’s not good for the centre-left to win higher educated voters – it is – but not at the expense of the much larger working class vote which is rejecting the centre-left specifically on mass, as this Economist graph shows. 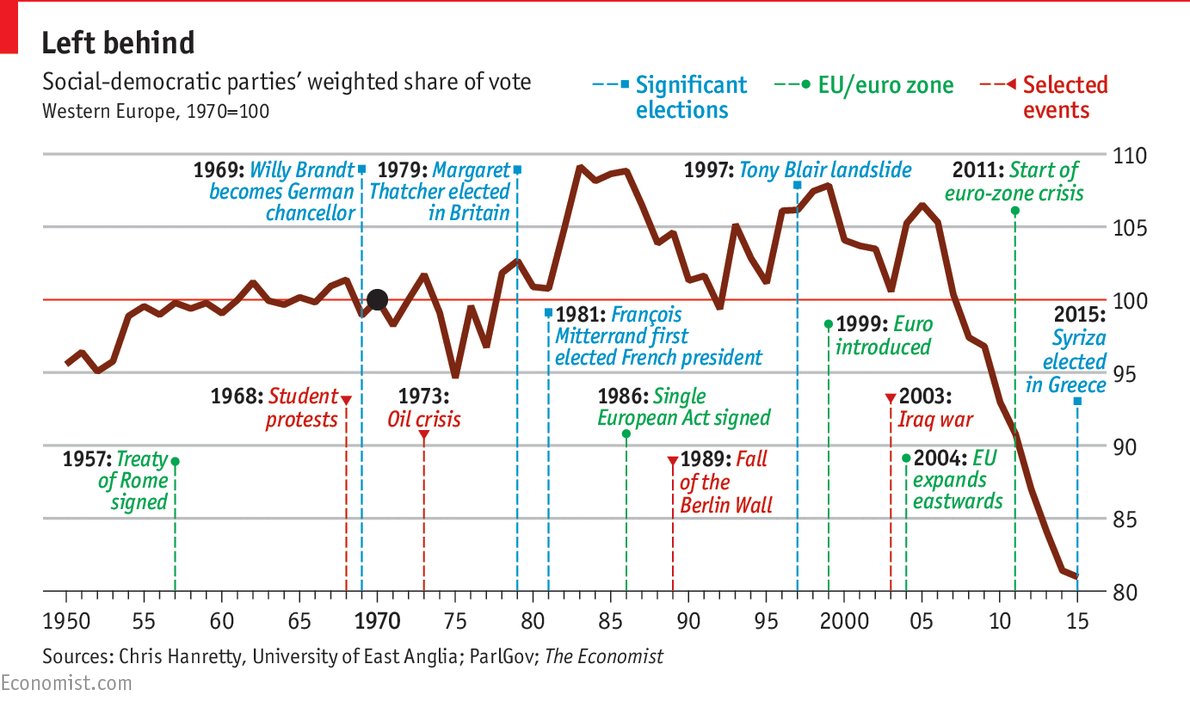 As political analyst Matthew Goodwin has pointed out, “social democrats are no longer facing the question of how to remain electorally competitive but how to survive”, with just six of 28 EU states with centre-left governments currently in power, compared to 10 of 15 in 2000.

As Goodwin goes on to say, there’s no rule which says political ideologies have to survive – the assumption that the centre-left will undergo a revival in the face of Global Trumpism is an entirely complacent one.

Part of the difficulty in a revival taking place is that the people who were in charge of European social democracy during the peak neoliberal years tend to still be in charge now – and people don’t tend to change; generations do.

But there is beginning to be some breaks in this picture. In the US, after the party establishment done a number on Bernie Sanders in the last Democratic primary race, he is the favourite to be the candidate against Trump in 2020, as he remains by some way America’s most popular politician.

ANALYSIS: Trump or no Trump, a Children of Men-style dystopia is upon us if we don’t change the system

Sanders anti-banker, socialist politics is now being filled out with more policy content, with a Jobs Guarantee Scheme being a notable addition to the armoury. This is the sort of boldness in left economic policy that can act as a genuine alternative to Trumpian economic nationalist rhetoric on jobs.

Sanders’ ‘Revolution’, like Jeremy Corbyn’s, remains fragile, buffeted as both figures are by the Democratic and Labour party machines respectively, and neither have been tested in office, but they offer more than what we are seeing on the Continent – the German SPD has had its worst result since 1933 but remains in neoliberal lock-step with Merkel.

Blyth includes the SNP in what he calls the left version of Global Trumpism – left revolts against the creditors’ paradise, along with the likes of Spain’s Podemos. While the SNP has indeed ridden the wave of popular discontent with the establishment borne out of deep discontent with the UK’s economic and social order, it’s not clear after 11 years in government that the leadership are aware that this is the basis of their support – the Growth Commission reads more like an ode to the Creditors paradise, than a manifesto for a debtors revolt.

Finally, what of Trump himself? I have deliberately avoided personalising this article in order to emphasise the primacy of broader forces in The Donald’s emergence, but it’s important to say that his presidency is not leading to waning support as many liberal critics assumed would happen, in fact the opposite is true.

After an initial steep fall when he first came into office he has been on a gradual rise, boosted by signalling trade wars with China and Europe. His poll ratings are now just about the same as Barack Obama’s and Bill Clinton’s were at this stage in office. He could well win a second term in 2020.

Whether he wins in 2020 or not, we will not have seen the last of Trump’s type as long as the system remains unreconstructed. If the future ordains more economic dislocation and alienation – which automation and AI could so easily bring – the danger is that history looks back on Trump not as a nasty aberration, but as the one who opened the door for the real fascists to walk through.