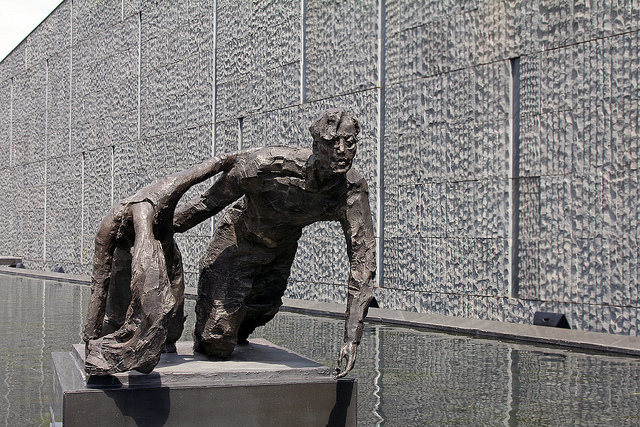 Angus Baird, Masters Student who lived in China for two years as an ESL teacher, writes about his visit to the Nanjing Massacre Museum, which showed him a history of the Second World War that is not understood in Western society, and which still shapes Chinese politics and international relations today

I WAS living in Jiangsu Provence in Eastern China when I decided I wanted to see more of the country and embarked on a trip to Nanjing to see the former capital. The trip included a visit to the Massacre Museum which commemorates the horrific atrocities that occurred during the Japanese invasion of China during, what we in the West call, the Second World War.

Getting on a bus at the local station I immediately noticed how dilapidated the vehicle was and was surprised to spot a bucket in the middle of the aisle to collect water from a leaking roof. Anyone who has travelled in China will be aware that public transport can be haphazard, and the standard of cleanliness is not what one is used to in Europe. I witnessed people constantly spitting on the floor and wiping slavers on the back of the seats which was a refreshing alternative from the sanitised conditions of Europe. There was also a middle-aged man shouting on his phone at a furious level throughout most of the journey and music blasting from the driver’s onboard stereo. This kind of thing seems to be part and parcel of travelling China where the cultural norms of the West are left far behind.

I departed at a rather busy bus terminal and felt instantly bewildered as to where I was and how I was going to get to my hotel. Nanjing has a population of over 8 million people, including the surrounding areas, feels extremely hectic and is equal in size to London. It was the capital of China up until the civil war ended in 1949 when the political centre was moved to the Northern city of Beijing. Moa Zedong’s Communists won and secured their power whilst the leaders and followers of the Chinese Republic fled to Taiwan.

I had booked my room using a Chinese travel site and had printed out a map of our destination. In China due to the great firewall and the restrictions on the internet there is no google maps and I had to plan my trip out using old fashioned methods. It was somewhat refreshing not to be reliant on my phone as a guide and to explore and navigate using my senses. I flagged down a beaten-up taxi and handed the driver the map. My Mandarin is exceedingly ropey, but I did my best to describe where I were going and pointed at the print off. He turned the map upside down then back again and kept giving puzzled looks but reassured me that he knew my accommodation. Sure, enough he managed to get me to my destination which was situated near a beautiful local nature spot called Xuanwu Lake Park. In the early morning and evening, outwith the heat of the day, you can watch elderly locals practicing tai chi or sing opera which makes one feel you are truly in a different world.

The following day I got up early and planned my two-mile walking route to the Nanjing Massacre Museum dodging electric scooters and street hawkers along the way. The museum itself was constructed in 1985 and renovated in 1995 and has an imposing concrete façade. It was built to commemorate the infamous Nanjing Massacre during the invasion by Japan in 1937. At the time Nanjing, was the central city of China before it was all but destroyed by the Japanese.

The museum is split into three different parts: outdoor exhibits, sheltered skeletal remains of victims and an exhibition of historical documents. The outdoor exhibits are mainly made up of statues and a wall listing the names of the victims. It is estimated that over 300,000 civilians and unarmed Chinese soldiers were killed during the invasion with bodies littering the streets. Skeletal remains are to be found inside the building that have been uncovered from mass graves. Walking through was an extremely sombre experience that really put the scale of the tragedy into perspective. The exhibition hall, which is partly underground, contains hundreds of items relating to the massacre. These mostly consist of photographs, paintings and short documentary films which show footage from the time and accounts of survivors. It was cautiously informative and provided a real insight as to what went on at the time of the invasion.

One thing that struck me immediately about the museum was how different the history of the Second World War was told. Growing up in the West we are usually taught about the conflict through the allies and axis paradigm. I can’t remember much being said in school history lessons about China’s involvement in the war. What was fascinating about the museum was how it enlightens the visitor to the horrors of the war in Asia. For the Chinese the conflict is not so much known as the Second World War but as the Great Chinese/Japanese war. The displays in the museum had very little in the way of information regarding the involvement of the European or American nations. There was no mention of Allied victories or of the eventual defeat of Japan by the use of atomic weapons or the Manhattan Project. The victory was played up as a Chinese victory over the might of Imperial Japan.

Another juxtaposition of the museum was the glorification of the Nazi regime. There was what I can only describe as a shrine devoted to the German involvement in the conflict which was quite in depth with swastikas and Nazi flags adorning a corner of the room. It was set up to commemorate the initial German involvement in trying to save Chinese lives during the beginning of the Japanese invasion. At first inspection it appeared to be an exaltation of the Nazi regime and out of keeping with the general theme of the building. Only by reading the individual accounts did one get the sense and reason behind the small area of the museum dedicated to the Germans that helped save some Chinese from persecution. John Heinrich Rabe was a Nazi Party member and German businessman that helped curtail the rape and murder of Chinese civilians during the Rape of Nanking by setting up a safety zone which helped to prevent the deaths of up to 200,000 people. He and other members of the Nazi Party are considered heroes and are still revered in China and it explains in part the warm feelings towards the Third Reich that are on display in the museum.

It was apparent that even after almost 70 years there was still a great deal of anti-Japanese feeling running throughout the exhibitions. This may be due to the fact that some prominent ultra-conservative Japanese refuse to acknowledge that the events of 1937 actually did happen. Indeed, there are many people in Japan that are largely unaware of the conflict due to the subject area being whitewashed from Japanese school history lessons.

Whilst in Europe the crimes of the Nazi Party are largely confined to history the same cannot be said of the Chinese feeling towards the Japanese involvement in the war. There is still, in general, an overt hatred towards the Japanese and this was a common theme throughout the museum with many exhibits referring to the Japanese as ‘Devils’. Whilst this is understandable given the atrocities that were committed it is still a little disconcerting, given the amount of time that has passed, the feeling of open hatred that is still displayed.

The redeeming feature regarding this matter was the peace memorial that was displayed in the outside area of the museum. There is a huge open area that is symbolises peace between the two nations and is designed to build positive relations between the two countries.  It is a calm and tranquil area where one can sit and reflect about the nature of the conflict and the horrors that occurred during the occupation. Many well-known Japanese leaders such as former Prime Minister Yukio Hatoyama have visited the museum and there are pictures displayed of their visits.

Nanjing is well worth visiting for a couple of days and has an array of activities to keep one occupied for a longer stay. If you are in China, the Massacre Museum is a must visit, it is the Chinese equivalent of Auschwitz. It really opens one’s eyes to the Chinese/Japanese conflict that occurred and gave an insight as to why relations between China and Japan are still so tense to this day. It changed my perception of the war and made me think about how the education on the subject in Scotland is very much focused on Europe and America and largely ignores the major events in Asia.

Picture courtesy of Slices of Light