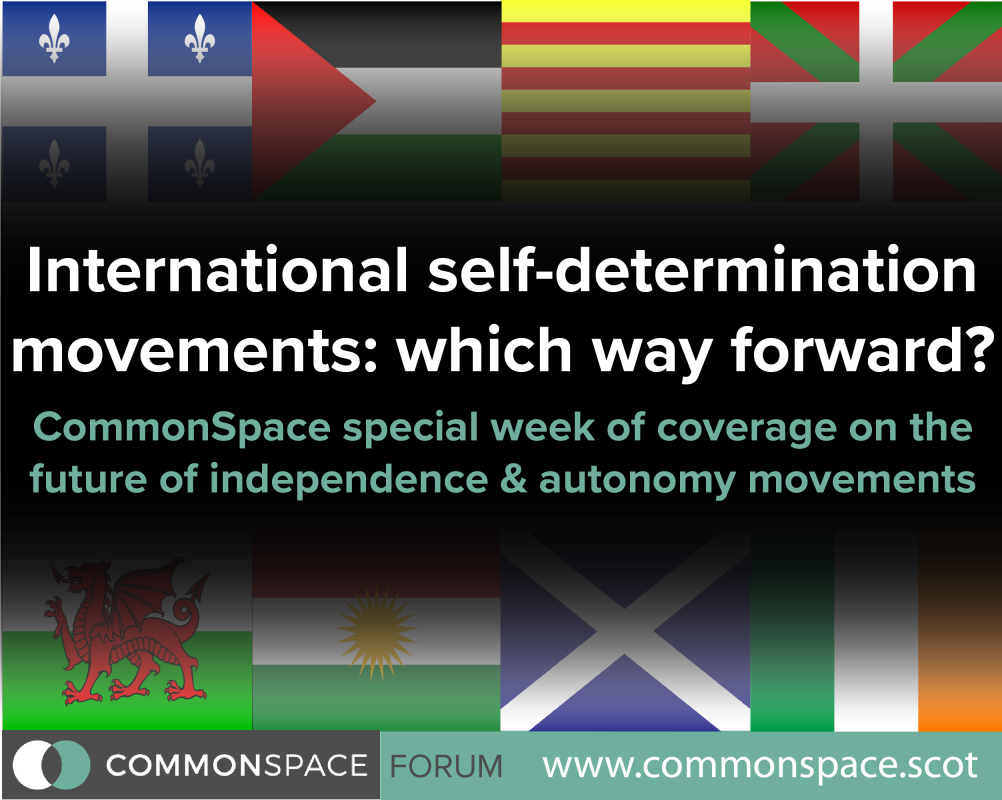 CommonSpace editor Ben Wray introduces CommonSpace’s special week of coverage on international movements for self-determination by arguing that, contrary to popular theorists of globalisation on the left and right, the nation remains the primary locus of political struggle, and will increase in importance this century

IN George Kerevan and Chris Bambery’s excellent 2018 book Catalonia Reborn, a very straightforward and effective way of understanding nations is elucidated, via the Catalan case.

Kerevan and Bambery write: “Discussion of the emergence of nationality has been dominated in recent decades by the notion that nations are in some sense ‘imagined’ communities conjured up at specific moments to serve the ideological purpose of a given political class or interest group. This is too simplistic, if not misleading.

“Nations are indeed constructs, but the construction is the result of titanic class, political and economic conflicts. An historic nationality is forged (or not forged) in the heat of these struggles.

“Catalonia is not the fictional and ideological construct of modern Catalan nationalism. Rather, over a period of time, a Catalan national entity emerged directly as a result of real conflicts – struggles for political leadership and control over territory. These gave birth to institutions, constitutions, legal systems, and social processes that crystallised into a material entity we know as Catalonia.”

Bennedict Anderson’s notion of imagined communities does not tell us a lot about nations specifically, since all communities at scale – where one does not know personally all other members of the community – are to one extent or another imagined. Nations are no more imagined than languages or classes – they are all social constructs formed by historical processes. What’s specific about nations is they relate to the “struggles for political and control over territory” over the course of history. It’s that place-based dimension which gives nations their historical endurance, while the notion of nations as the outcome of historical conflicts, and therefore not settled in time but constantly changing and shifting, shows its relevance to contemporary political developments.

Seen in this light, ‘the national question’ is an inherent and inevitable aspect of political crisis, and so it should not come as a surprise that the post-2008 crash and post-Iraq war world has thrown up national conflicts in Catalonia and Spain, Scotland and the UK, Kurdistan and Syria/Iraq/Turkey, and so on and so forth.

It became popular in the late 1990’s and early 2000’s to argue that globalisation had rendered nations historically redundant, Michael Hardy and Toni Negri’s  book ‘Empire’ being perhaps the most notable example of this trend on the left. But as geopolitical writer and proud defender of US empire Robert D Kaplan has argued, “the very finite size of the Earth is an instrument of instability, because as the population grows — as megacities get bigger and bigger, as missile ranges overlap, as the media can travel the speed of light, almost — the fact that the Earth… cannot expand but stays the same size means a more claustrophobic planet.”

Obviously there are countervailing tendencies to the growing significance of nations in global politics. Economic and cultural integration can loosen their pre-eminence, as regional and global solutions and common interests are more likely to be identified. But the only real examples of this tend to be when one or a combination of the most powerful nations seek solutions in their interest via supra-national authorities or coalitions. Nato, the IMF and the World Bank are obvious examples of this in the US case, while the Eurozone has been of clear benefit to the German economy over other Euro-member states. The inability of global institutions to rise to the greatest global challenges, such as climate change and the refugee crisis, is further proof that they tend to reflect the specific interests of those at the top of a global hierarchy of nation-states, rather than some benign, common global interest. The US’ making and breaking of the Iran nuclear deal is a clear case study in how a change of strategy in US imperialism forced the other coalition partners – including the EU – to surrender to its will, even after stating that they would uphold the Treaty.

This reality comes as great frustration, and often denial, to those who can’t see the difference between globalisation and internationalism, and who see all things national as reactionary, and all things supra-national as progressive. But progress isn’t bestowed by bureaucrats in Brussels or well-meaning human rights professionals at the UN. It’s fought for from below, by the struggles of ordinary people, people who are from a place, and who’s ability to pressure those in power tends to be at the local and national level – where they’re from.

While some argue a sharp dichotomy necessarily exists between the national and international, for those leading real struggles on the ground, it’s obvious that concrete struggles start where they are, and their succeses reverberate outwards: they fight for their rights in their country, and stand with all those who do the same in theirs across the world. Once it’s understood that national consciousness does not necessitate obedience and deference to the nation-state, it’s clear that the nation is the primary locus of class struggle, in which democratic rights can be advanced nationally, and thus internationally.

Some hold up Karl Marx and Frederick Engels’ Communist Manifesto as evidence that all talk of the nation is anti-socialist, citing his famous line that “the working men have no country, we cannot take from them what they have not got”.

What they don’t do is then quote what Marx and Engels said next: “Since the proletariat must first of all acquire political supremacy, must rise to be the leading class of the nation, must constitute itself the nation, it is so far, itself national, though not in the bourgeois sense of the word.”

What this illuminates is that the nation as a concept is not the ideological tool of a particular class, it is a battlefield in which competing ideas of the nation and its role in the world are fought upon. Where do national struggles for self-determination and independence fit into this schema?

There are no hard and fast rules, but a general guiding principle is that progressives should stand with those struggling for self-determination of nations from more powerful nation-states. There are examples where this principle does not hold true, for instance in a country that seeks to undermine other countries tax laws and aid and abet criminality in those countries through operating as a tax haven. But in general, the principle of supporting nations right to self-determination means one is defending the democratic rights of the weaker nation against the stronger one.

Of course, supporting the right to self-determination does not necessitate supporting independence itself, but most of the autonomy and independence movements internationally in the present epoch share the common characteristic of resisting the authoritarian and reactionary nationalism of the nation-state they seek to leave, and thus take on a pro-democracy and progressive character. With democracy straining under the twin threats of global corporate power and strong-men nationalist leaders, progressive movements for new national democracies are a valuable commodity.