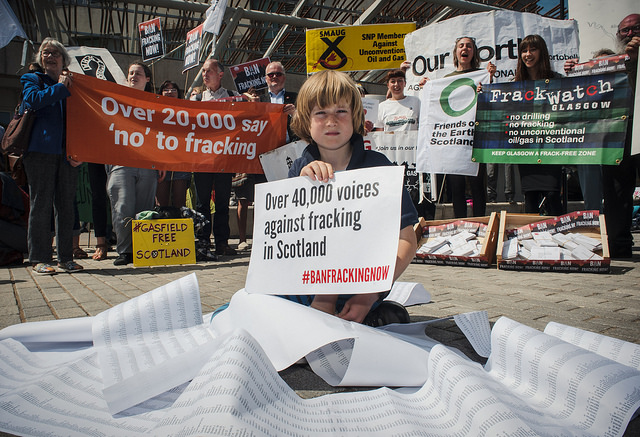 FRACKING WILL NOT take place in Scotland, the Scottish Government announced on Tuesday (3 October).

Paul Wheelhouse MSP, Minister for Business, Innovation and Energy revealed the much anticipated decision in parliament, to coincide with the publication of the analysis of the Scottish Government’s public consultation on the issue.

Wheelhouse said: “Taking full account of the available evidence and the strength of public opinion today, my judgment is that Scotland should say ‘no’ to fracking.

“To put this position into immediate effect, we have today written to local authorities across Scotland to make clear that the Directions that gave effect to the moratorium will remain in place indefinitely.

“Fracking cannot and will not take place in Scotland.” Paul Wheelhouse, Minister for Business, Innovation and Energy

“The decision I am announcing today means that fracking cannot and will not take place in Scotland.”

In practice, Wheelhouse explained, this means that the Scottish Government will use its planning powers will prevent any unconventional oil and gas applications from being accepted.

The public consultation received 60,535 valid responses, which Wheelhouse noted was the second largest response to a Scottish Government consultation. Approximately 99 per cent of these responses opposed fracking.

Wheelhouse concluded: “It is right that this government sought expert, independent, scientific advice, and that we took the time needed to seek the views of the people of Scotland.

“The people have spoken. The time has come to move on.”

The decision has been welcomed by environmental campaigners, albeit cautiously, while opposition parties have criticised the lack of legally binding ban.

Dr Sam Gardner, Acting Director of WWF Scotland said: “It’s excellent news the Scottish Government has listened to the thousands of people, campaigners, and politicians across the country who have been calling for a permanent ban to fracking.

“The climate science is clear. The vast majority of fossil fuel reserves need to be left in the ground.  It’s fantastic Scottish Ministers agree that we need to start placing them off limits.”

Mary Church, Head of Campaigns for Friends of the Earth Scotland, hailed the announcement as “a victory for the environment and for local communities”.

“We are still a long way from turning a planning moratorium into a watertight ban.” Mark Ruskell MSP (Scottish Greens)

She said: “The Scottish Government has reached the right and sensible conclusion that the fracking industry must be banned to avoid potentially devastating impacts to people’s health, the climate and our natural environment.

“The measures announced today are the right interim approach until licensing powers are technically transferred to Holyrood.”

Church argued, however, that the Scottish Government should commit to passing a law to ban the practice once the powers to do so are devolved.

The Scottish Green Party, which has been at the forefront of the efforts to outlaw fracking, similarly called for a more “watertight ban”.

Mark Ruskell MSP, Energy and Environment spokesperson for the Scottish Greens, said: “We welcome the Scottish Government’s clear intention to ban fracking. That is a victory for communities across Scotland and the wider green movement.

“However, we are still a long way from turning a planning moratorium into a watertight ban that can resist legal challenge from powerful companies like INEOS.

“The Scottish Government must commit using a combination of powers over planning, environmental regulation and licensing to deliver a permanent ban. They must bring this back to the Scottish Parliament to be voted on after recess.”

Scottish Labour environment spokesperson Claudia Beamish, who has proposed a bill to legally ban fracking, called the decision a “victory for Labour”.

“Labour has long argued that the climate change science is clear – we do not need another fossil fuel. Instead Scotland needs to develop forms of renewable energy with unionised and well paid jobs.

“This much-needed economic boost and these jobs will now be created outside of Scotland, thanks to the SNP.” Dean Lockhart MSP (Scottish Conservatives)

“But extending the moratorium indefinitely is not as strong as a full legal ban, and could be overturned at any point at the whim of a minister.

“That’s why I want the SNP government to work with me to ensure a full legal ban.”

Scottish Liberal Democrat energy spokesperson Liam McArthur MSP welcomed the decision, saying “the Scottish Government is right to join the growing consensus in declaring that fracking has no place in Scotland”.

The Scottish Conservatives are the only party to oppose banning the practice, in keeping with the position of the UK Conservative Government. Scottish Tory MSP Dean Lockhart said the decision would result in Scotland being “left behind” and missing out on the economic opportunities offered by fracking.

He said: “This much-needed economic boost and these jobs will now be created outside of Scotland, thanks to the SNP.”

Paul Wheelhouse argued in his announcement that the use of planning powers would be “an effective, and indeed a much quicker way, to deliver our policy objective” than introducing legislation.

He also emphasised: “Notwithstanding our position on unconventional oil and gas in Scotland, our support for Scotland’s industrial base and manufacturing sector is unwavering.”

This Scottish Government’s newly stated position on fracking will be reflected in the upcoming Energy Strategy to be published in December.