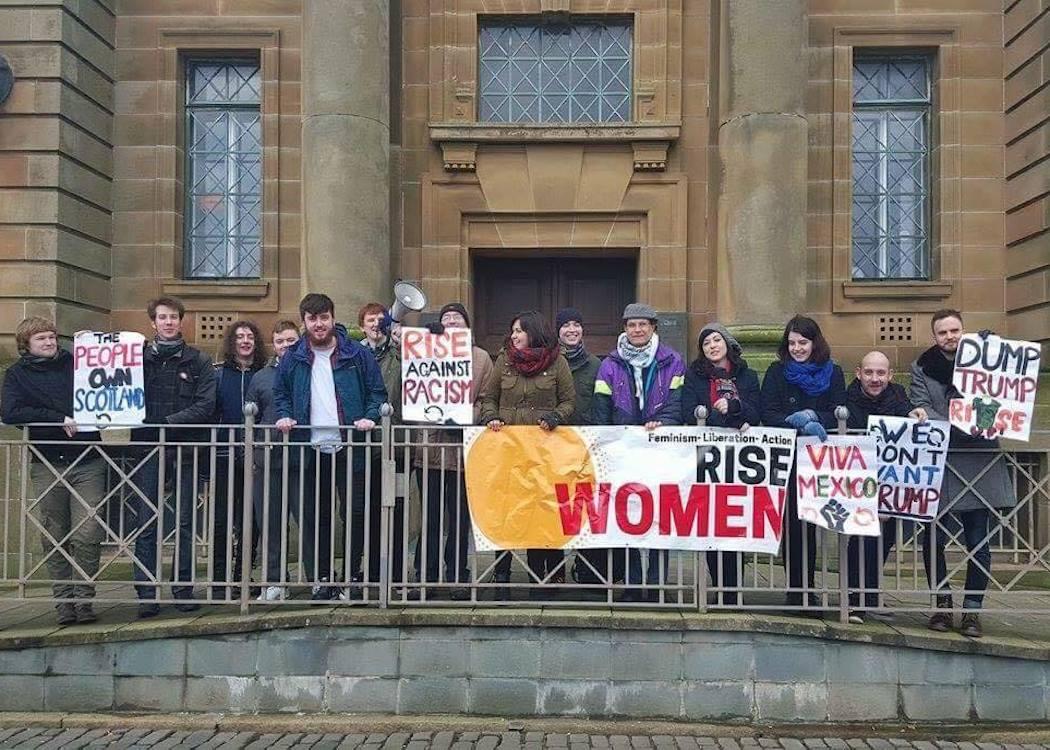 Activists from Rise, the socialist alliance standing in May’s Scottish election, took to the Trump international hotel in Aberdeenshire and Turnberry golf course in Ayrshire to express “opposition to Trump’s commercial presence” in Scotland.

The billionaire, once close to Scottish first ministers Jack McConnell and Alex Salmond, has been brought into disrepute due to his statements against Mexicans, women, Muslims, and disabled people. His controversial golf course development on the Menie estate was passed by the Scottish Government despite local opposition.

Since then, the Scottish Government has removed Trump as a Scottish business ambassador and Robert Gordon university rescinded his honorary degree.

Commenting, a Rise spokesperson said: “When he [Trump] launched his presidential campaign in June, he described Mexican immigrants to the United States as ‘drug dealers’ and ‘rapists’. Last month, he said that, if elected to the White House in November, he would temporarily ban all Muslims from travelling to America. He is, in addition, one of the leading figures in the so-called ‘birther’ movement, which contends, without any evidence, that President Barack Obama is not a natural born American citizen.

“Following the Scottish Government’s decision to strip Trump of his ‘Global Scot’ status – and in advance of the debate at Westminster on whether he should, in the future, be granted entry to the United Kingdom – Rise activists are expressing opposition to Trump’s commercial presence in Scotland.

“We did this because we are fully committed to confronting racism in all its forms, because we stand in solidarity with American minority groups targeted by Trump’s rhetoric, and because we believe that Trump’s association with Scotland is damaging to our country’s national reputation.

“We aim today to disrupt, however briefly, Trump’s ability to generate profit in Scotland that will then be spent on his campaign of racist demonisation and scapegoating in the US.

“In Scotland, we are more aware than most of the bullying tactics Trump deploys when faced with public opposition. While building his controversial golf course at the Menie estate in Aberdeenshire – an ecologically unique stretch of land – he rode roughshod over the wishes of local residents, as well as the legitimate concerns of environmentalists.”

Former first minister Alex Salmond recently called for Trump to remove his name from the Turnberry course, arguing it made it impossible to host the British open there and as a result had lost Scotland PS100m of investment.

A debate will take place in Westminster today [Monday 18 January] over whether he should be banned from the UK as a ‘hate preacher’ following a petition signed by nearly 600,000 people.

Trump is currently leading US Republican party polls to become its presidential candidate.