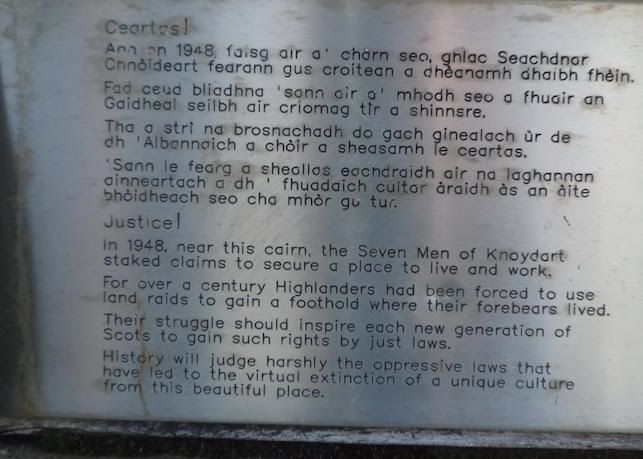 Land, and who owns it, matters to developing the rural economy

IN 1999 KNOYDART was a trail-blazer. Very few communities in Scotland, despite centuries of campaigns for land justice, has funded a full community buyout.

17 years later Angela Williams of the Knoydart Foundation, who was a guest speaker at a private landowners conference in Edinburgh yesterday [Wednesday 25 May], told CommonSpace about the positive impact the buyout had for the community.

Why did you want to speak here today?

“I was asked to come and speak by Scottish Land and Estates. From a community landowner, I was interested to see how the private landowning sector was responding to the whole land reform agenda.

From your experience, what would you say have been the successes of community landownership?

“Where do you start? I think the big success is involvement of people in the land, in managing the land and the assets, and the opportunities that brings. In sustaining population growth. In providing financial sustainability. In providing housing. In building up a future for communities, particularly in rural and extreme rural areas.”

How has Knoydart changed since the original community buyout?

“I wasn’t here in 1999 when the community buyout took place. I came in 2001. We’ve seen a population that was somewhere between 60 and 70 move to around the 115 mark. We’ve seen a move from five affordable accommodation units to eleven. We’ve seen reliable 24 hours-a-day electricity. We’ve seen good quality broadband available.

“There’s very tangible improvements in terms of service provision, but hopefully there’s more than that. We have six community companies managed by 20-30 local people. There’s a real commitment to managing that from local community.”

Land ownership was an issue at this conference. Given the concentration of land ownership, is redistribution necessary?

“I would like to see greater diversity of land ownership. I think what you see – with a variety of different community land owners – is the different benefits that that can bring. It brings a new vitality. It brings new skills. That in turn has a knock-on effect on that local community.

“I think because of the way we’re structured, we’ve done a community buyout – and it’s not easy and it’s not for every community – you have a commitment to making that succeed. You can manage that land and those assets in a different way than a private land owner might do. That can bring huge benefits.”

Knoydart has a history of struggle for land justice. Is history important in the land reform debate?

“Looking forward is absolutely right, but I think understanding where you’ve come from is equally important as well. On Knoydart we’ve seen a significant increase in population, and you can become a victim of your own success because people moving in weren’t there when we had power for three or four hours a day – and that’s not long ago.

In Kyoydart a cairn was built (inscription above) for the ‘Seven Men of Knoydart’ who carried out a land raid in 1948.

“It’s just a very small monument, from the village hall. Yes, that’s even further back in the past – but you could argue that what we’ve achieved has its roots there. Even though the population has changed, that is a daily reminder that what they did wasn’t in vain.”

“In 1948 near this cairn the Seven Men of Knoydart staked claims to secure a place to live and work.
For over a century Highlanders had been forced to use land raids to gain a foothold where their forebears lived. Their struggle should inspire each new generation of Scots to gain such rights by just laws.

“History will judge harshly the oppressive laws that have led to the virtual extinction of a unique culture from this beautiful place.”