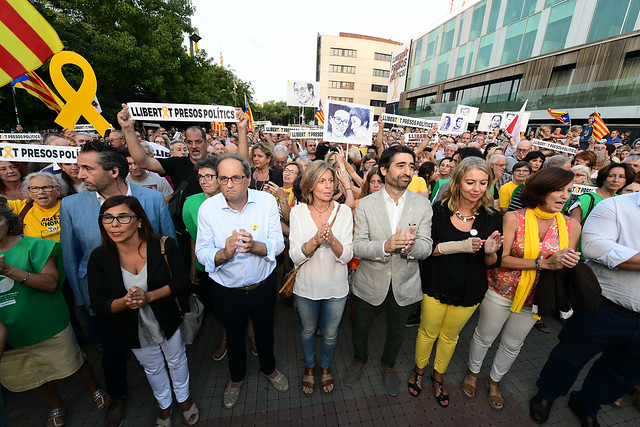 As the trial of Catalan leaders draws to a close, the Catalan president is seeking an “urgent meeting” with Pedro Sanchez to discuss the findings of the UN working group on arbitrary detention

The report, written by experts from the UN working group on arbitrary detention (UNWGAD), was released on 29 May and defined the detention of three of the pro-independence figures now on trial for their involvement in the 2017 Catalan referendum as “arbitrary.”

The report – commissioned by the UN Human Rights Council, but not speaking on behalf of the entire UN – goes on to call for the release and compensation of the prisoners, arguing that their imprisonment contravenes the Universal Declaration of Human Rights and the UN’s International Covenant on Civil and Political Rights.

“The deprivation of liberty of Jordi Cuixart, Jordi Sanchez and Oriol Junqueras is arbitrary,” the report states.

“The deprivation of liberty of Jordi Cuixart, Jordi Sanchez and Oriol Junqueras is arbitrary.” Report from the United Nations working group on arbitrary detention

President Quim Torra responded to the report by calling for the immediate release of Catalan grassroots leaders Cuixart and Sanchez, and the former Catalan vice-president and newly elected MEP Oriol Junqueras.

A statement from Torra said: “Our political and social representatives should never have entered prison because they have defended the democratic rights of all Catalans.

“This is a resolution taken by the highest authority and international authority in this area and anyone who intends to minimise it or reduce its value will be mistaken.

“Their resolutions are mandatory and if the Kingdom of Spain does not comply, they will be in violation of international law. It is a demolishing resolution for Spain.”

“Our political and social representatives should never have entered prison because they have defended the democratic rights of all Catalans.” Catalan President Quim Torra

It was today [5 June] reported by Catalan media that Torra will also request an “urgent meeting” with the acting Spanish President, where he is expected to raise concerns over the UN report and developments in the ongoing trial, which recently saw accusations of an attempted “coup d’état” during the 2017 independence referendum.

“The repression is not stopping but it has to stop,” Torra argued.

The Spanish Government has so far reacted to the UN report in a combative manner, arguing that the working group’s conclusions failed to take into account the crimes of which the Catalan defendants are accused, as well as ignoring Spanish law, which deemed the 2017 referendum illegal.

A statement from the Spanish Government raised “doubts” about the UNWGAD’s “independence and impartiality” and called on the UN to ensure that its working groups are not used “for spurious purposes.”

Exiled former Catalan president Carles Puigdemont – who is currently fighting for accreditation in the European Parliament following his election as an MEP last month – also commented: “There’s clear abuse of detention powers. I can’t recall any case among European democracies in which the UN has expressed such clear condemnation and asked so clearly for [detainees] to be released.

“This confirms that they are political prisoners as a consequence of their illegal detention. They have lost their political rights as Spanish MPs. It’s absolutely mandatory that the Spanish authorities release them.”

Both Puigdemont and Junqueras were successfully elected as MEPs in the European elections, but may be required to swear an oath of allegiance to the Spanish constitution in Madrid before being allowed to take their seats in Brussels. However, should Puigdemont return to Spain, he could face arrest under similar charges to the 12 Catalan leaders already on trial.

While the trial is now entering its final stages, a judgement is not expected until September.