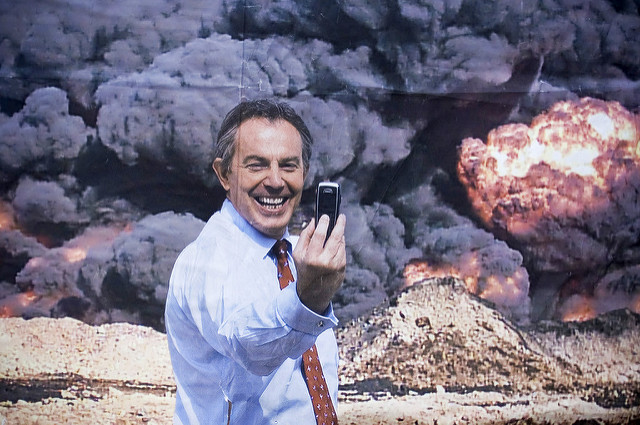 Sean Bell finds that the Syrian civil war has spurred a revival among those who advocate military action on humanitarian grounds despite the experience of Afghanistan, Iraq and Libya, and has seen the anti-war Left reanimated but also divided in a way it wasn’t in the past

THE AIRSTRIKES carried out against Syrian targets by the UK, the United States and France earlier this month have forced both politicians and the public to reconsider the question of ‘liberal interventionism’, the doctrine that defined Western military involvement in Afghanistan, Iraq and Libya.

To many, the legacy of these conflicts condemned liberal interventionism to the shadows, even if its associated policies were never effectively abandoned. Some of its erstwhile defenders have adjusted their rhetoric in recognition of this: even as Prime Minister Theresa May stood before the House of Commons to justify her unilateral action, she repeatedly claimed that the strikes were not about regime change.

Yet that reticence has been undermined by those advocates of intervention who have more openly returned to the arguments that characterised the War on Terror, premising intervention as a genuine moral crusade once more.

Speaking in parliament on 16 April, Labour MP Chris Leslie thundered that “a policy of inaction would also have severe consequences”, and demanded that “those who would turn a blind eye – who would do nothing in pursuit of some moral high ground – should today also be held accountable for once?”

Also nursing a grudge against those he felt had not been properly held accountable for their opposition to bombing sovereign nations was Observer columnist Andrew Rawnsley, who wrote following the airstrikes: “Action has consequences and they are not always the ones intended and hoped for. That was the grisly lesson of Iraq. Inaction also has consequences. Doing nothing can have a price every bit as high.”

Rawnsley was echoed by a host of his journalistic colleagues, including Chris Deerin and David Torrance in The Herald, many of whom once endorsed the original conflicts which brought liberal interventionism into such widespread disrepute, and have survived with their careers – if not their reputations – intact.

The spectre of liberal interventionism loomed larger over its latest incarnation by the return of two ghosts of illegal invasions past: days before the airstrikes took place, former prime minister Tony Blair urged Theresa May to support any US action against Syria, while in the US itself, President Donald Trump appointed John Bolton, arch-neoconservative of the Bush administration, as his national security advisor. With these old ghosts stirring, liberal interventionism does not appear to be resting in peace.

“The Syria strikes are part of an attempt to resuscitate an ailing political establishment.” Activist and New Foreign Policy board member Jonathon Shafi

According to Jonathon Shafi, Scottish anti-war activist and board member of the New Foreign Policy think tank, the return of such figures is no accident: “There is a reason Tony Blair in particular has been touring the TV studios of late. And there is a reason French President Emmanuel Macron is boasting that it was he who managed to persuade Trump to commit to Syrian military intervention on a long-term basis. This is a war of position being carried out by the ‘extreme centre.’”

Shafi explained that air strikes on Syria served a dual purpose. On foreign policy they want to “re-establish the veracity of Western military intervention wholesale after the Iraq disaster” and domestically the strikes help “resuscitate an ailing political establishment”.

He continued: “They are using the question of war as an attempt to re-establish political order and coherence domestically. Clinton, Blair, Macron, May, the Labour right, the pro-intervention commentariat and so on are united in this pursuit.”

According to British journalist Yvonne Ridley, the return of Blair and Bolton is a sign that the approach in Iraq could be revived in Syria, Iran and North Korea.

“Neither of these men are willing to accept that the war in Iraq was a mistake nor do they seem able to see that much of the trouble in the Middle East today is a direct result of their determination to see regime change in Iraq,” she said.

“No-one is better at not fucking off than Tony Blair.” Journalist Jamie Maxwell

The Canada-based Scottish journalist Jamie Maxwell argues that, despite falling from the public view, the architects of liberal interventionism never truly retreated from political influence: “It’s more interesting to me that neither Bolton nor Blair ever really left the public stage, despite Iraq sinking into an ever deeper state of crisis, and despite every aspect of their world view being systematically shredded in front of their eyes. Blair, of course, has resolutely refused to fuck off ever since he resigned the premiership in 2007. No-one is better at not fucking off than Tony Blair.

The blinkered determination to impose a liberal interventionism solution upon every foreign policy challenge is also recognised by Adam H. Johnson, a writer for Fairness and Accuracy in Reporting and the presenter of the media analysis podcast Citations Needed: “Regime change is the little black dress of foreign policy punditry – it never goes out of style.”

Regarding Syria, Johnson says: “It’s the same faux-humanitarian pretext. Iraq was for democracy. Afghanistan is for women’s rights. Libya was about rape gangs or some such. Where there’s a war there’s a network of cynical and credulous liberal hanger-ons who will find justification for the US to rain bombs and carve up territory.”

“The strangest thing to me is this cognitive dissonance where liberals see Trump as an unstable, unprecedented existential threat with dementia, and – at the same time – were upset that he wasn’t bombing Syria.” Journalist Katie Halper

The interplay between the ostensibly ‘liberal’ advocates of liberal interventionism and the current US presidency is particularly noticeable to Katie Halper, American left-wing journalist and the host of the political podcast the Katie Halper Show: “The strangest thing to me is this cognitive dissonance where liberals see Trump as an unstable, unprecedented existential threat with dementia,” says Halper, “and – at the same time – were upset that he wasn’t bombing Syria and declaring war on the nuclear power that is Russia”.

Syria appears to have presented many advocates of liberal interventionism, and in particular those who begrudge the poor reputation of the wars they once endorsed, with an opportunity to rehabilitate both their arguments and themselves. Halper instead believes that “it’s more that they still haven’t learned their lesson.”

“It seems so obvious that the take-away from Iraq is that regime change isn’t a good move. How much clearer could it be? We tried the whole ‘removing a Middle Eastern Ba’athist dictator’ thing before and it didn’t work. Saddam Hussein being a bad guy did not mean that his removal made life better for Iraqis. It made life worse. It destabilised the region. It created ISIS. It led to more bloodshed and violence and death and destruction.”

Johnson describes Syria as “the perfect opportunity” for liberal interventionists to rehabilitate themselves “since the very real crimes of The Official Bad Guy this time are being carried out in real time as opposed to years ago, as was the case with Saddam – so their moral grandstanding is far more urgent and visceral.

“And they can peddle the myth the US has ‘stood by’ and ‘done nothing’ despite mounds of evidence the CIA has armed and funded opposition groups to the tune of billions. But stating this simple fact makes you a ‘conspiracy theorist’ or ‘Assadist’ or a war crime denier or a whole host of undesirable, careering-damaging things so most people just ignore it for simplicity’s sake. No one was ever not published because they wrote some handwringing piece in the Guardian or The New York Times over a ‘lack of action’ by the US.”

“No one was ever not published because they wrote some handwringing piece in the Guardian or The New York Times over a ‘lack of action’ by the US.” Journalist Adam H. Johnson

Halper also recognises the demonization that often follows opposition to the interventionist line: “When you ask people who support military intervention in Syria what will or should happen if and when Assad is removed, they will ask you why you are defending Assad and/or call you an Assadist and will dodge the question. Of course, opposing military intervention in Syria doesn’t make you any more of an Assadist than opposing the war in Iraq made you a Saddamist.”

Jamie Maxwell, however, does recognises a shift within the arguments of modern liberal interventionists: ““It [the argument] has evolved in one way: liberal commentators now know that they must address the issue of Iraq if they are going to make the case for intervention, even if it is only to insist that this intervention is nothing like Iraq. So you end up with someone like Andrew Rawnsley saying that, if liberals must take responsibility for what happened in Iraq, then the left is morally culpable for what’s happening in Syria.

“But there are two obvious problems with this. First, liberals haven’t taken responsibility for what happened in Iraq. They’ve largely passed the blame onto Iran or ISIS or the Iraqi government. Second, the left’s case against intervention isn’t just that the west has no moral or legal authority to intervene – it’s that intervention doesn’t work. In fact, it actively makes the situation worse. That’s been the lesson from Iraq, Libya, and probably Afghanistan. That’s not pious grandstanding. It’s not gesture politics. It’s practical experience. In all seriousness, how many more times do these people want to experiment with the idea that bombing a city in the Middle East into rubble will eventually liberate it?”

“The cheerleaders for humanitarian intervention have no serious interest in the humanitarian dimension.” Peace activist Isobel Lindsay

In the opinion of veteran Scottish peace activist Isobel Lindsay, “we can say with confidence that the cheerleaders for humanitarian intervention have no serious interest in the humanitarian dimension.

“Where is their interest in action against the Saudis for their actions in Yemen or against Turkey for their current appalling attacks on the Kurds in Syria or, of course, their convenient amnesia about yet another period of intensification of Israeli attacks on Palestinians?”

READ MORE: Analysis: Why the strikes on Syria were illegal and why it matters

“The broad left was generally united against the war in Iraq minus some high-status liberals,” says Johnson. “Syria has totally divided the left and ruined relationships, friendships, political coalitions, etc. It’s a super toxic environment that has broken people’s brains on both sides and driven otherwise intelligent people into two warring camps: one where the Russian air force is somehow woke and cares deeply about the Syrian people and the other that totally glosses over the CIA’s role and the sectarian, genocidal tendencies of many in the opposition.

“One would think adults could hold two competing ideas in their head at the same time – that the Syrian government is brutal and cynical and the opposition is largely foreign-backed and tends jihadist – but evidently this isn’t allowed. Obviously, the Syrian people have, by far, suffered more than anyone in this whole shit-show, but it’s worth noting one couldn’t have scripted the past seven years any better if their goal was to divide the anti-war left. It’s in total ruins.”