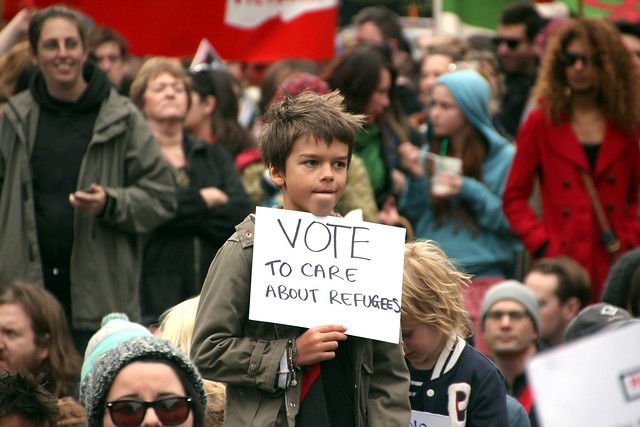 Contributing to our week of special coverage, Marie Von Leipzig takes a look at what extending voting rights in Scotland to refugees and asylum seekers in the recently published Scottish Elections Bill could mean

“For far too long I have spoken with people who are passionate about Scotland’s future and genuinely want to vote in the elections but cannot due to their status. Before you speak to them they say ‘I am an asylum seeker I cannot vote!’ In the 21st century I feel like this is discrimination against a certain group and we now have the chance to reform this.”

THESE words, by Roza Salih, a prominent Glasgow human rights activist and contributor to the 2019 Refugee Festival Scotland, reflect the views of many people who participated in the Electoral Reform consultation undertaken in 2018.

Based on the results of this public consultation, showing evidence of widespread support for the extension of the franchise (79 per cent of the 751 respondents were in favour), the Scottish Elections (Franchise and Representation) Bill, introduced on 20 June, proposes to extend the franchise to all legal residents of Scotland with a permanent address. This will include those who have been granted refugee status and temporary or humanitarian protection. Crucially, it will not be subject to a minimum residency requirement, thus avoiding the creation of “a two-tier system where non-British citizen voters could have been considered ‘second class’ voters.”

However, people without indefinite leave to remain will not be given the right to stand for and hold office in the proposed changes, thus not being granted full suffrage. Moreover, the requirement to verify the nationality status of applicants might prove to be challenging for stateless individuals.

The decision not to impose a minimum residency period reflects the recommendation of ‘New Scots: refugee integration strategy 2018-2022’, a one year government and Scottish Refugee Council review into the rights of refugees and asylum seekers in Scotland, which proposed that they “should be supported to integrate into communities from day one of arrival, and not just once leave to remain has been granted”. 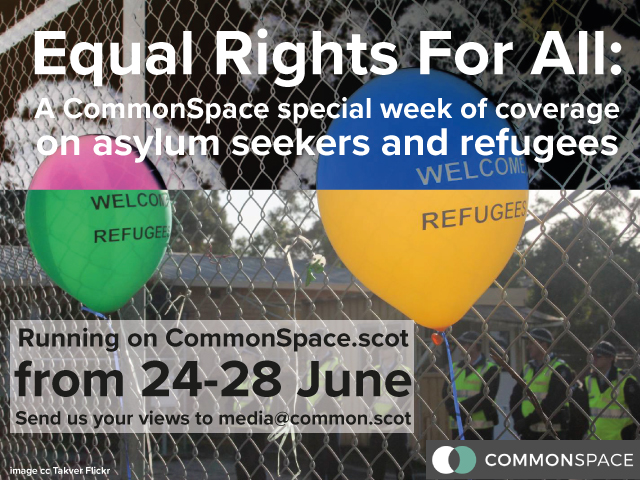 The potential danger of marginalisation is underlined by an Afghan refugee stating in a 2018 study that: “In the early months and years after arrival, refugees and asylum seekers have more time and more motivation [to learn] about integration into the host country’s civic and political community. Years of disengagement due to lack of voting rights isolates them and even after they have obtained British citizenship, the system would sound alien to them.”

Commenting on the introduction of this new bill, Green MSP Ross Greer tells CommonSpace: “This measure will make everybody feel welcomed and valued and I’m pleased that the Scottish Government have made this move.”

Salih, addressing a meeting at the Refugee Festival Scotland on voting rights, contends: “This is a crucial moment in history, it lies in our hands to do it. The franchise will make a huge difference to these people’s lives. I am sure other countries are going to look to Scotland in this issue.”

This decisive step taken by the Scottish Government will not only allow hundreds of foreign nationals to have an impact on Scotland’s political life (estimates suggest that around 55,000 non-EU and non-Commonwealth citizens will be enfranchised), but also holds symbolic importance, demonstrating that against the increasingly restrictive backdrop of the immigration policy imposed by the Home Office, Scotland is paving the way for a positive and inclusive integration approach.

Reflecting on the possibility of seeing a similar step being taken by the UK Parliament and highlighting the growing tensions between Westminster and Holyrood, Graham Campbell, councillor for Springburn/Robroyston in Glasgow, says:  “I think the likelihood of it happening in the UK is zero, because Brexit is going in one direction, Scotland is going in another direction, so obviously I would love that to happen in the rest of the UK as well, but I think the political climate isn’t there south of the border.”

Other countries including Sweden, Finland, Denmark and the Netherlands have granted the right to vote to non-citizens, mainly in local elections. In Ireland, refugees and asylum seekers are eligible to vote in local elections since 2004. However in the majority of countries, access to local and national elections is still the prerogative of citizens.

Importantly, the significance of expanding the franchise to include refugees and asylum seekers extends far beyond the mere act of casting a vote every five years. Being able to voice one’s political opinions both through formal and informal mechanisms has far-reaching personal as well as social consequences.

Political and economic rights do not need to be antithetical demands; social integration and political equality are non-linear, mutually dependent processes.

Thus, International IDEA’s report states that access to voting rights has “an intrinsic value, as it acknowledges refugees’ symbolic membership and sense of belonging to the political community for the duration of their stay in their host country. Moreover, it serves the instrumental purpose of encouraging refugees to invest in the acquisition of local political norms and knowledge.”

It logically follows that if rights increase empowerment and participation, lack of rights has the effect of suppressing refugee and asylum seekers ability to integrate on their own terms.

Speaking to CommonSpace, Salih explains the negative impact the current lack of rights, or unawareness of rights, has.

“Psychologically, it affects them.” She says. “They do not feel valued, therefore they will exclude themselves, they will isolate themselves from society. Many people don’t know their rights, they don’t know that they can contact their MPs and MSPs for help.”

Many refugees and asylum seekers who face barriers trying to express their political opinions are using alternative means such as community theatre performances to dramatise their experiences of social precarity and everyday xenophobia as well as to have an impact on the political discourse around migration in the UK. Indeed, many seek to challenge widespread misrepresentations of refugees marked by victimisation and rejection by sharing narratives of empowerment, pride and courage.

According to PhD researcher Ruth Webber from the University of Manchester, this is an opportunity for them to have power and agency over the way their story is told and to “navigate the stormy seas of the asylum process, in which control and choice are greatly reduced.”

Informal mechanisms of civic engagement such as through civil society organisations, charities and grassroots initiatives, while not replacing formal participation in political life, are a vital tool for refugees to have access to different spheres of society as well as to foster a sense of ‘home’ and ‘belonging’.

While freedom of expression, association and assembly are guaranteed by the 1948 Universal Declaration of Human Rights, most refugees and asylum seekers have in effect no political voice whatsoever, which exacerbates their already vulnerable and marginalised position in society. Countries of origin overwhelmingly deny access to out-of country voting, while political expression in host countries is often seen as a threat to national cohesion and domestic harmony.

Giscard Kuimi, an activist with Africa Future, which is hosting an event at Refugee Festival Scotland on Saturday to highlight the importance of educational scholarships for refugees and asylum seekers, highlights how the debate over voting rights reflects the divergences between Scotland’s and England’s political climate.

“The way the Home Office works, the way they treat people, is absolutely bad,” Kuimi says. “It is perhaps good that the Scottish Government pushes this [Franchise Bill]. It’s done in a humane way, in Scotland. Asylum seekers are quite happy to live here.’

Despite some positive changes,  asylum seekers are still denied a number of core rights, such as full employment, renting property, welfare benefits, bank accounts, driving licenses and access to higher education, while government cuts to ESOL classes (which are crucial for political engagement) have taken place across Scotland, which makes integration and inclusion incredibly challenging.

Furthermore, electoral rights does not automatically translate into actual mobilisation or into the representation of minorities’ interests. Evidence from multiple studies has shown that past negative experiences with politics including persecution, imprisonment and harassment by the government of the country of origin, greatly impacts individuals’ participation in political life. The share of elected representatives coming from an immigration background is still very small in the UK. A study conducted by the International Institute for Democracy and Electoral Assistance concluded that “pervasive and substantial underrepresentation” is still the norm in most countries.

However, though asylum seekers and refugees will continue to face limitations on different levels, the Scottish Elections Bill – which will require a two-thirds majority to pass through the Scottish Parliament – could be a stepping-stone for further decisive transformations to make refugees and asylum seekers feel like full and valued members of society.

As Dr Reuven Ziegler, associate professor in international refugee law at the University of Reading, asserts, political life cannot be confined to electoral processes alone: “Access to electoral rights should not be seen as the end point of a successful process of integration, but as an instrument facilitating integration itself.”