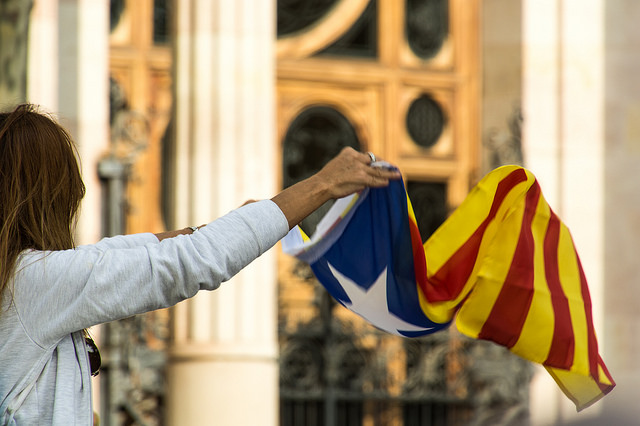 AN ESTIMATED 45,000 pro-Catalan protestors have taken part in a mass demonstration in Brussels in support of the embattled nation’s independence, following the declaration of a Catalan Republic and ahead of 21 December’s controversial election.

The Thursday demonstration was intended to apply pressure to EU institutions which have thus far ignored entreaties from both Catalans and sympathisers in the international community to intervene, following Spanish authorities violent repression of Catalonia’s 1 October independence referendum, which the Spanish constitutional court declared illegal.

The 45,000 participants in the protest vastly exceeded predicted estimates by the Belgian police, who had earlier stated they expected around 20,000 demonstrators to take part.

Many had arrived by coach from Catalonia, including over 200 Catalan mayors, travelling for hours in order to take part in what has been an overwhelmingly peaceful demonstration.

“What binds us together as a common people is our universal human right for self-determination.” SNP MSP Christina McKelvie

SNP MSP Christina McKelvie, one of the most most vocal SNP supporters of Catalonia’s right to self-determination, sent a message of solidarity to the protest, to be read in her absence:

“The road to freedom is often fraught with danger; but it is certainly a road worth travelling.

“To see so many from across the continent – this continent of friends, of allies and of comrades – come together in solidarity is nothing short of inspiring. Despite those who try to silence us, whether that be through the seizing of ballot papers or the smacking of police batons, demonstrations like today show that peaceful assembly is always the gateway to democratic emancipation.

“What binds us together as a common people is our universal human right for self-determination. Everyone has the ability to choose their own destiny. Whether that be Yes or No, Leave or Remain, or Sí or No. We all have that universal right to use or voices – no matter the oppression or obstacles in the road – to determine the future for our own country. That choice must be respected.

“They have chosen their destiny – as a free, independent republic of Catalonia.” SNP MSP Christina McKelvie

“A respect that has been gravely lacking from European Institutions too. Today I reiterate my call for the Council of Europe, the European Union and all other European institutions play an active and participatory role in ensuring a peaceful transition of autonomy from Spain to Catalonia.

“The Catalan people made themselves abundantly clear. They have chosen their destiny – as a free, independent republic of Catalonia.

“Your friends throughout Europe and everyone who has travelled the Road to Brussels stand with you as we work together to realise your Nationhood.”

George Kerevan, the economist, journalist and former SNP MP, is also reported to have travelled to Brussels to take part in the demonstration.

READ MORE: Christina McKelvie: Situation in Catalonia “can’t just be about the legality”